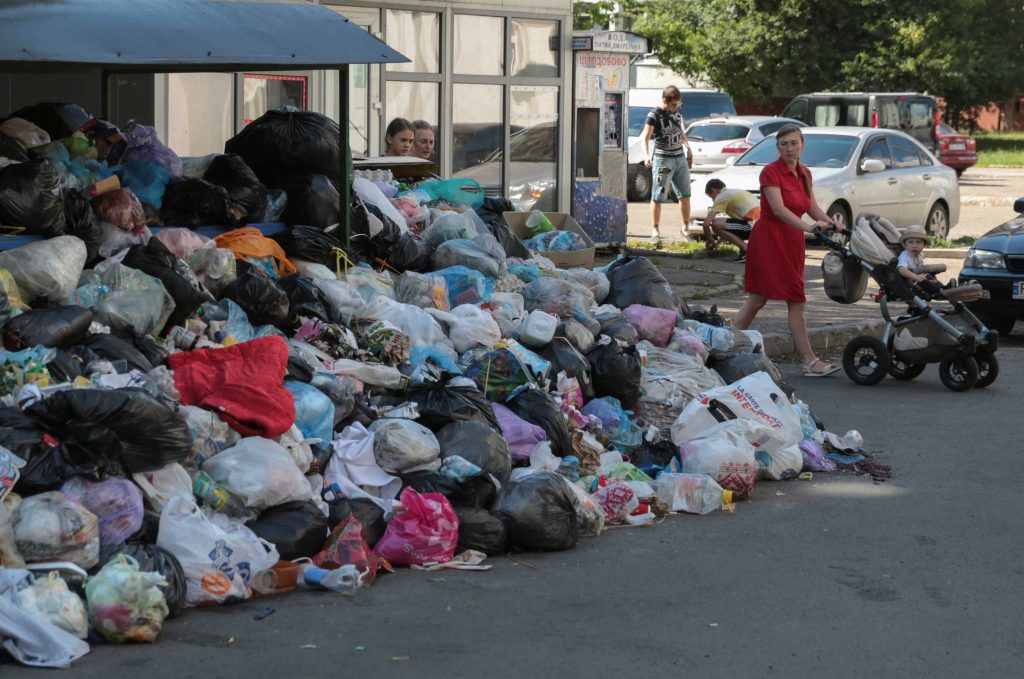 Lviv is Ukraine’s most beautiful city, an exquisite UNESCO World Heritage site that has survived attacks and changed hands for seven centuries.

The city is a successful IT hub and its hotels, restaurants, and architecture attract 2.5 million visitors a year. Since 2006, its reform-minded mayor and city council have upgraded infrastructure and enticed industry to the region by protecting them from corruption. Some fifty-four manufacturers have set up operations recently, creating 12,000 jobs in 2016 alone.

But that year a new marauder attacked Lviv.

“This has been the worst year of my life,” said Mayor Andriy Sadovyi in an interview in his office on June 25 during the city’s impressive jazz festival.

His terrible year began in May 2016 when a serious fire swept the city’s landfill site, killing three emergency responders and a city employee went missing. Since 2012, the city wanted to replace it with a modern recycling plant and had obtained $400 million in financing from the European Bank of Reconstruction and Development. But the federal government blocked the deal.

The prosecutor did not investigate arson, but instead convinced a judge to shut down Lviv’s dump operations immediately. This meant the trash collected from one million people had nowhere to go and an appeal to the federal government went nowhere.

Then the system closed ranks on Lviv. Ukraine has more than 5,000 landfill sites but none agreed to take the rubbish. “Each landfill site we approached began closing down to new business from Lviv, as if by magic wand. We approached every private landfill operator during this time, and after we did each had immediate problems such as visits by law enforcement, documentation challenges, and threats,” he said.

Lviv finally reached an agreement with the city of Pokrovsk. “The owner was happy, but two days later he and his family got threats that they would be risking their lives if he agreed. He apologized and backed out of the agreement. We have had no help from other Ukrainian authorities,” said the mayor.

Sadovyi believes a concerted effort to undermine him is underway.

Throughout the last year, garbage piled up as the city failed to find a site, littering its streetscape and causing sanitation and environmental problems.

To those outside Lviv, the saga appeared to be a case of petty politics. But targeting an individual just because of his party affiliation is bad enough. Using the courts and law enforcement to hold a city and its people as hostages is another matter altogether.

On June 19, the issue came to a head after three Samopomich parliamentarians launched a hunger strike in protest on the steps of Bankova, the Presidential Administration, in Kyiv. I interviewed one of the strikers on the second day, Oleh Berezyuk, who was surrounded by well-wishers and dozens of armed guards cordoning off the street.

“This is a humiliation against people and a threat to their health,” said Berezyuk, a psychiatrist and Samopomich deputy from Lviv.

The hunger strikes captured national attention. The US ambassador criticized the situation, and church leaders joined forces to meet the president to ask him to stop the blockade on humanitarian and environmental grounds.

“After that, the State Commission on Emergencies met and decided the landfill should be opened,” said the mayor. “It was only the intervention of the churches and others that stopped this.”

On June 25, a public rally of thousands celebrated the return to normalcy. Going forward, the city has plans to build a modern garbage disposal and recycling system with its own revenues and funds from European development entities.

However, he maintains that “it was an artificial blockade and the people did not turn against us.” He predicts a continuation of harassment and said that other reform-minded officials are being attacked, including Mikheil Saakashvili and the mayor of Mykolaiv. “This is not just about Lviv,” he said.

The day after the garbage matter was settled, Ukraine’s most famous rock star Svyatoslav Vakarchuk discussed the need for strong Ukrainian institutions at a conference in Lviv. He did not talk about the garbage war, but the danger of concerted efforts to damage the country without the rule of law.

“Post Maidan, Ukraine is in more danger than anyone can imagine. With no judiciary, the future is a question mark. Reforms can stop or be reversed,” he said. “We must build institutions to protect the people.”

Until that happens, there will be more attacks. The damage inflicted on the people of Lviv demonstrates that the marauders are not just from Russia. They are also within.

Image: A woman pushes a child in a stroller past a pile of trash in Lviv, Ukraine June 19, 2017. REUTERS/Pavlo Palamarchuk