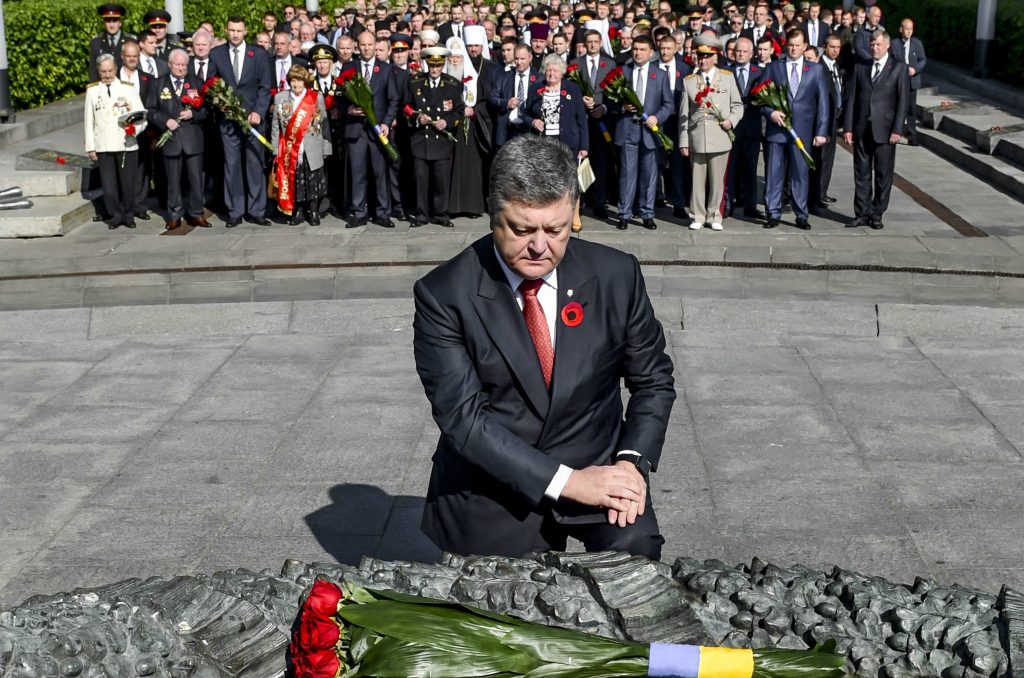 Across the former Soviet Union, May 9 is traditionally the date for Victory Day celebrations to mark the end of World War II. In Ukraine, it can often feel as if the war never actually ended. Ever since Ukraine gained independence in 1991, World War II has served as a proxy battleground for Ukrainians as they fight over the past in order to determine the future. In this historically arrested society, the symbols and slogans of the conflict continue to retain the full potency of the 1930s and 1940s. Contemporary political and geopolitical arguments routinely descend into the gutter of World War II analogies. Most alarmingly, the Russian hybrid war in Crimea and eastern Ukraine relies heavily on Kremlin efforts to portray Ukrainians as the modern-day successors to Hitler’s legions. These never-ending memory wars are a symptom of the larger totalitarian trauma that defines today’s Ukraine—a land scarred by the tragic distinction of having been at the epicenter of both Hitler and Stalin’s worst crimes against humanity. Understanding this unique totalitarian legacy in its entirety is the key to resolving Ukraine’s identity crisis and bringing about a settlement with the past that will make sense to the entire nation.

After the fall of Kyiv to the Mongols in the thirteenth century and prior to the twentieth century, Ukraine had not achieved statehood, instead spending hundreds of years partitioned within the borders of competing empires. This made the country particularly vulnerable to the rival totalitarian tendencies unleashed in the chaotic aftermath of World War I. The fight for control of Ukraine was to play a central role in both the Nazi and Soviet stories, with devastating consequences. Among other things, Ukraine was the chief battlefield of the Russian Civil War, the primary focus of Stalin’s 1930s murder machine, and the greatest prize of Hitler’s 1941 Operation Barbarossa. For an extended period stretching from the Russian Revolution until the 1950s, Ukraine was quite literally the deadliest place on the planet—a laboratory of totalitarian terror that claimed the lives of between fifteen and twenty million Ukrainians. In an age of unparalleled destruction, Ukraine was the primary killing field.

Ukraine’s status as the chief victim of Nazi and Communist totalitarianism has largely escaped the attention of international observers, primarily because we are not yet accustomed to thinking of twentieth century Ukraine as a separate entity. Nevertheless, the very real results of this totalitarian experience continue to stare us in the face. Ukraine’s contemporary demographic divisions are the direct product of ethnic cleansing campaigns and mass population shifts masterminded in Moscow and Berlin. On a more indiscernible level, the totalitarian inheritance is evident in common feelings of alienation from the state and the almost total absence of faith in authority. It polarizes the past, making consensus impossible and forcing Ukrainians toward the extremes of the political spectrum.

We can also identify echoes of the totalitarian era in the culture of secret histories and conspiracy theories that continue to thrive today. It is detectable in everything from the absence of national leaders to the habit of viewing government corruption as a victimless crime. Perhaps most importantly, this totalitarian legacy enables Russia’s hybrid war, creating fertile ground for the Kremlin’s emotionally charged information attacks.

Russia’s exploitation of Ukraine’s totalitarian trauma has made it a national security priority and an international issue that can no longer be ignored. In order to heal these historical wounds, Ukraine must stop looking at individual events like Stalin’s terror famine and the Nazi occupation in isolation. Instead, Ukraine needs to approach the country’s twentieth century totalitarian experience as a single narrative. This is essential in order to challenge negative perceptions of Ukraine and to position today’s country as the world’s most prominent post-totalitarian society. Only then will Ukraine begin to make sense to the outside world. Only then will Ukrainians of all backgrounds be capable of achieving closure and consolidating an inclusive and coherent sense of national identity.

This process is already underway. For the second year, Ukrainians have marked the anniversary of the Nazi surrender with a National Day of Memorial and Reconciliation. In contrast to the pomp and parades favored in Putin’s Russia, Ukrainians are now being encouraged to reflect on the victims of the conflict. This new national day of remembrance also pointedly recognizes the first two years of World War II when Hitler and Stalin worked together to carve up Eastern Europe—something Soviet and modern Russian histories have long tried to avoid. The next stage in the process should be the extension of this timeframe from 1939-45 to at least 1917-1954, allowing Ukraine to take on the role of global memory keeper for all victims of twentieth-century totalitarianism.

To make this a reality, the Ukrainian government should develop plans for a vast memorial complex and museum designed to highlight the horrors inflicted by the Nazi and Soviet regimes on the territory of Ukraine and elsewhere. A new national memorial day is also required. The anniversary of the Molotov-Ribbentrop Pact on August 23 would seem to have unimpeachable credentials as an appropriate date. This is already a recognized international day of remembrance for the victims of Stalinism and Nazism, but Kyiv should seek to make it a far more significant affair and aim to play a central role in observance of the memorials. The fact that this anniversary falls one day before Ukrainian Independence Day (August 24) will serve to imbue it with further meaning and poignancy.

It would be right and proper for Ukraine to undertake the important international task of commemorating the victims of mankind’s darkest epoch. It would also help today’s Ukrainians make sense of their country’s deeply troubled past. Rather than being asked to take sides in a ghoulish zero-sum historical debate of apocalyptic proportions, future generations of Ukrainians could honor those who perished and focus on keeping their collective memory alive. There would be no place for divisions along ethnic, religious, linguistic, or other lines. Instead, all Ukrainians would be able to unite in recognition of their shared totalitarian past and their collective commitment to avoid repeating such horrors in the future. No country suffered more in the twentieth century, and no country has more to gain from achieving meaningful closure.