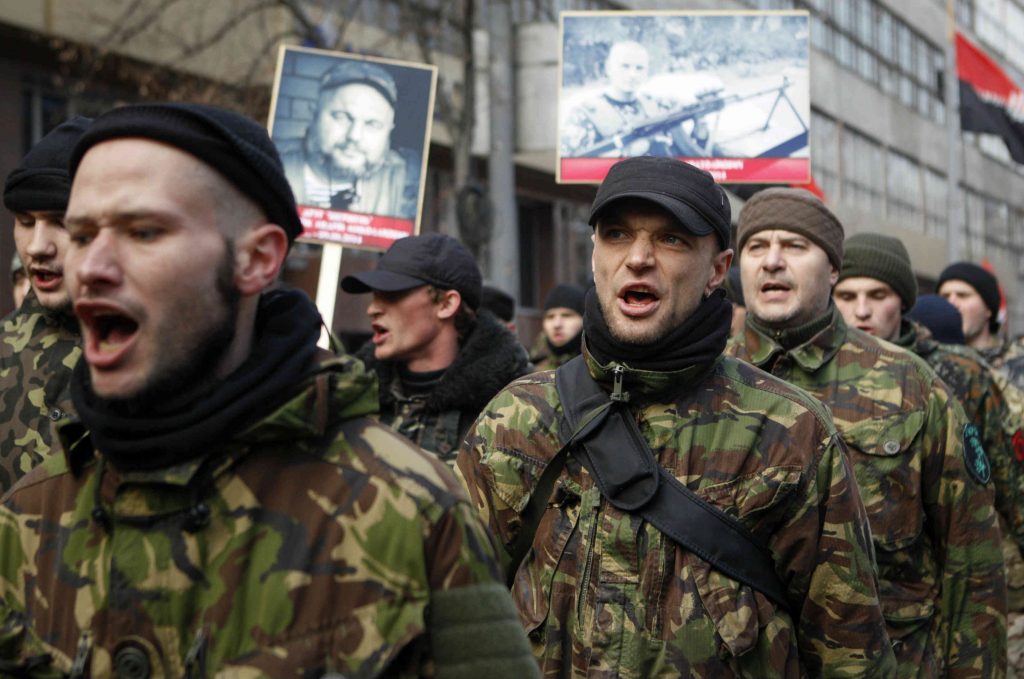 The Ukrainian army faces growing criticism from within its ranks after humiliating defeats at Debaltseve and Ilovaisk in eastern Ukraine. When fighting broke out between Ukrainian forces and Russian-backed separatists, the Ukrainian military was weak and the state had to rely on volunteers. Of the fifty thousand Ukrainian troops in the field, 22 percent are loyal to volunteer battalions, according to one estimate. Now the Ukrainian government must address an inconvenient and pressing question that it has studiously ignored: how to integrate the more than seventy-nine semi-autonomous volunteer battalions into the military. The necessity to integrate the battalions goes beyond military necessity; this issue strikes at the heart of reform in post-Euromaidan Ukraine. The business as usual mixture of violence and politics can no longer be tolerated if the Ukrainian government has any hopes of reforming existing power structures.

Battalions like Aidar, Azov, Dnipro-1, Donbas, and Kryvbas were initially created as a response to the shambolic state of Ukraine’s official military. Beset by nonexistent investment and poor management, the Ukrainian military relied heavily on privately funded groups. The relationship blossomed in summer 2014 when Ukrainian forces were able to recapture a substantial portion of the territory under the control of the Donetsk People’s Republic and the Luhansk People’s Republic. The Ukrainian forces’ retreat from Ilovaisk in August 2014 signaled the beginning of the turning point in relations between the military and its volunteer battalions. Dnipro-1 Commander Vladimir Shilov said he hoped the botched retreat from Ilovaisk was merely “incompetence,” although “people [were] talking about betrayal” on the frontlines.

Despite the strained relations between the government and battalions, the relationship continued out of necessity. Parliamentary elections in October 2014 solidified President Petro Poroshenko’s power base in parliament, while renewed fighting in the winter left no time for reevaluation. At the same time, most battalions continued to be funded by elements outside of the control of the federal government. Wealthy private donors, such as oligarch Ihor Kolomoiskyi who financed the Azov, Dnipro, and Donbas battalions and online crowd-sourced campaigns that brought in contributions from the Ukrainian diaspora, allowed volunteer battalions to flourish without reliance on government-controlled resources.

The Minsk II ceasefire agreement and the retreat from Debaltseve continued to strain the relationship, but the real turning point occurred when Poroshenko fired Kolomoyskyi as Governor of the Dnepropetrovsk region on March 25, 2015. The resignation came on the heels of a miscalculated power play; Kolomoyskyi had dispatched armed men to take over the headquarters of Ukrnafta, the largest producer of oil and gas in the country, and Ukrtransnafta, the government pipeline company. The oligarch’s demotion marked the beginning of new efforts by the government to rein in power bases outside its control.

Volunteer battalions are different from oligarchs, but the Ukrainian government is reining both in. The government’s ongoing reforms have forced pre-existing power bases to side with the government and have a say in future dealings or be left out. This is true of oligarchs, and it’s true for the country’s volunteer battalions as well. Valentyn Nalyvaychenko, head of the Security Services of Ukraine (SBU), announced that all volunteer units must join the ranks of the National Guard, the Ukrainian military, or the SBU or surrender their weapons and leave the conflict zone immediately. He offered those units that bring themselves under the control of the Ukrainian military legal status and benefits.

Leaders of battalions are also being legitimized through official administrative roles. The Ministry of Defense appointed Dmitry Yarosh, leader of Right Sector, as an adviser to the Commander-in-Chief of the Ukrainian Armed Forces on April 6. The appointment of Yarosh was considered a strategic ploy, but it was successful in decreasing the impact of rogue elements within the Right Sector. According to Adrian Karatnycky, Senior Fellow with the Atlantic Council’s Program on Transatlantic Relations, Yarosh was able to repudiate “chatter among Right Sector fighters that it was time to march on Kyiv and remove President Poroshenko from office” by praising the responsible actions of those Right Sector units that have “sprung in to scout.” As a result, the inclusion of figures originally outside the confines of the federal government, such as Yarosh, former Donbas battalion commander Semen Semenchenko, and former Azov battalion deputy leader Vadim Troyan, dilutes the independent authority these power bases have held before the conflict began.

The real test facing the Ukrainian government is the unknown threat from forces that don’t accept its official authority. Groups like the Organization of Ukrainian Nationalists, which refuse to integrate into the Ukrainian Armed Forces, and the Aidar Battalion, which was disbanded in March 2015 after several members attempted to bring weapons into Kyiv, will put further strain on a government facing a disapproval rating of nearly 60 percent.

In the coming months, the success of Ukraine’s reformers to “destroy the old [political] system while simultaneously building a new one,” as Speaker of the Parliament Volodymyr Groysman put it, will hinge on if it can address corruption, the judiciary, and decentralization. But without the complete integration of volunteer battalions, reforms to redistribute existing power structures will fail.

Ruben Gzirian is an Eastern Europe Analyst at Navanti in Arlington, Virginia. The views stated represent those of the author alone.

Image: Activists of the Right Sector carry portraits of their comrades killed in fighting with pro-Russian separatists during an anti-government march in Kyiv on February 25, 2015. The Ministry of Defense appointed Dmitry Yarosh, leader of Right Sector, as an adviser to the Commander-in-Chief of the Ukrainian Armed Forces on April 6. REUTERS/Valentyn Ogirenko