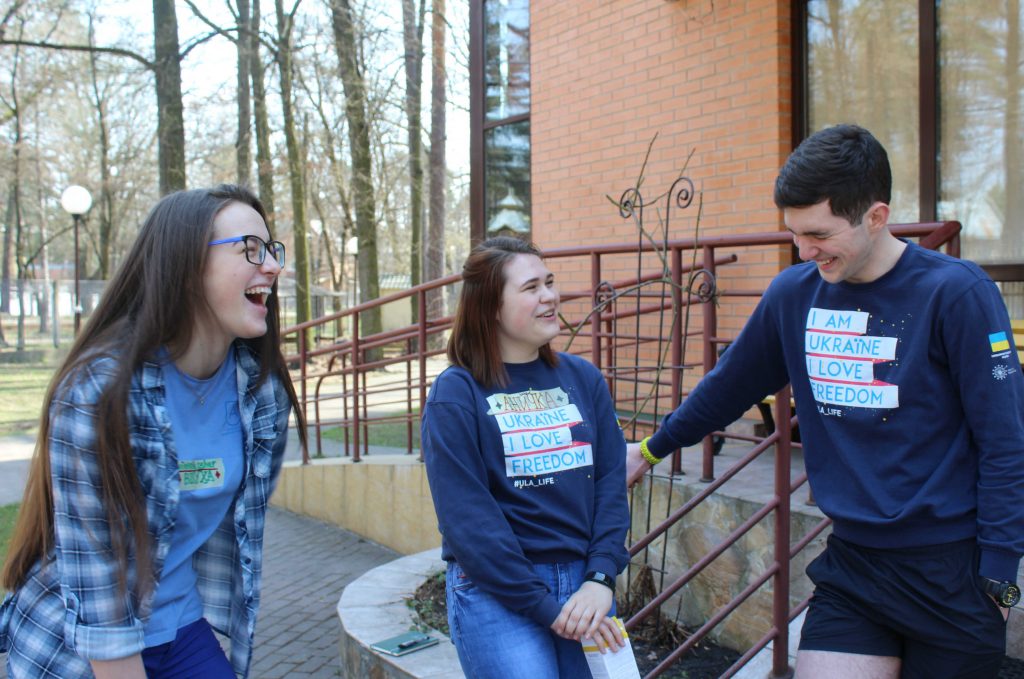 One could be forgiven for mistaking the campus of the Ukrainian Leadership Academy in Kyiv for a small liberal arts college in the United States. With its red-brick dormitory and modern glass facade, light-filled cafeteria that doubles as a disco, easy camaraderie, and never-ending intellectual discussions, it transported me back to my undergraduate days in Pennsylvania.

But the academy is different from most colleges; it strictly forbids drinking, drugs, smoking, and sex, and students exude a seriousness of purpose absent on most US campuses today.

The small campus in northern Kyiv is home to thirty-nine young Ukrainians who are taking a gap year between high school and college to focus on their emotional, physical, and intellectual growth. The students, aged sixteen to eighteen, live in dormitories with adult mentors; it’s the first time most have been away from home for a sustained period of time.

Launched in 2015, the Ukrainian Leadership Academy has four additional locations in Lviv, Kharkiv, Mykolayiv, and Poltava, and plans to open its sixth in Chernivsti. The Western NIS Enterprise Fund helped launch the first campus and assisted with the other four. Today the academy is raising support from local businesses and national and local governments, and is hoping to receive international support. Students pay only a modest 2,000 hryvnia application fee (approximately $75), but nothing for the actual program.

On a beautiful Saturday in April, three current students—Victoria Oshur, Anna Brukh, and Orest Portechko—greet me in navy-blue shirts that say, “I am Ukraine. I love freedom.” They proudly show me their peaceful campus, which doesn’t feel like exhausting Kyiv at all.

Groups of students are timing each other to see how many sit-ups and push-ups they can perform in sixty seconds, while others play a leisurely game of table tennis.

But life at the academy isn’t easy. Discipline is a big part of the daily routine. Students get up at 6:45 am to run, and then proceed through a program that includes community service, lectures, reading, English lessons, more exercise—and lots and lots of discussions.

Timed exercises are a big part of the daily routine at the Ukrainian Leadership Academy. Credit: Melinda Haring

Courses include what one might expect a college freshman to encounter, from religion to art and philosophy. However, some are also practical, focusing on important life skills like financial education and the psychology of relationships.

In the world religions course, students visited a Mormon temple, a Hare Krishna compound, and a Jewish synagogue. Most Ukrainians are Orthodox or Catholic, so it was an opportunity to experience “the other” first-hand.

Community is a big word at the Ukrainian Leadership Academy; everyone knows each other and greets each other by name.

“I like the academy so much because of the community,” says eighteen-year-old Vika Oshur, a tall brunette from Ivano-Frankivsk in western Ukraine. After the academy, Vika thinks she can do anything, and I believe her. “The world is open for me,” she says. She plans to study history or international law at Ukrainian Catholic University or Kyiv Mohyla in the fall.

The academy pushes its students to think beyond Ukraine and see similarities and differences internationally as well. Ukraine has been isolated for decades, and as a result of strong Russian propaganda, some perceive it as a failed state. Nevertheless, the academy and its students see Ukraine differently: it’s a proud nation that others can learn from and one which contribute globally.

In November, students went to Israel for a week, and made colorless, flavorless tree bark soup that they offered to people in Tel Aviv to draw awareness to the Holodomor. The Israelis they encountered had never heard about the famine that killed somewhere between 2.4 and 12 million Ukrainians in 1932-1933. The students think that this tragedy gives them a special mission to speak out about hunger, and to make Ukraine a leader in agriculture to help to feed the world.

In Jerusalem, they visited the Knesset, and before anyone realized it, some of the academy students were pressing members of parliament as to why they haven’t recognized the Holodmor as the genocide of the Ukrainian nation.

In May, students will visit Poland, Austria, the Czech Republic, and Belgium, also to broaden their horizons.

“If I didn’t come here, I would be a different person,” said seventeen-year-old Anna Brukh from Lviv oblast. She called her time at the academy “a year of change” and said that it has helped change her perspective of herself. She wants to work in education, business, and art, and plans to study sociology at Ukrainian Catholic University.

Orest Portechko, sixteen, also wants to go to Kyiv Mohyla, but isn’t sure what he wants to study. “The academy is a place where you can make a lot of mistakes…and it doesn’t hurt as much as in real life,” he said.

The word is getting out, and the program has become increasingly competitive. Olena Halushka, international relations manager at ULA, says the school looks for young people who are already leaders in their own communities and who are willing to take responsibility for Ukraine. “I think this academy is a great opportunity to show Ukraine is changing,” Halushka said.

It’s only a matter of time.