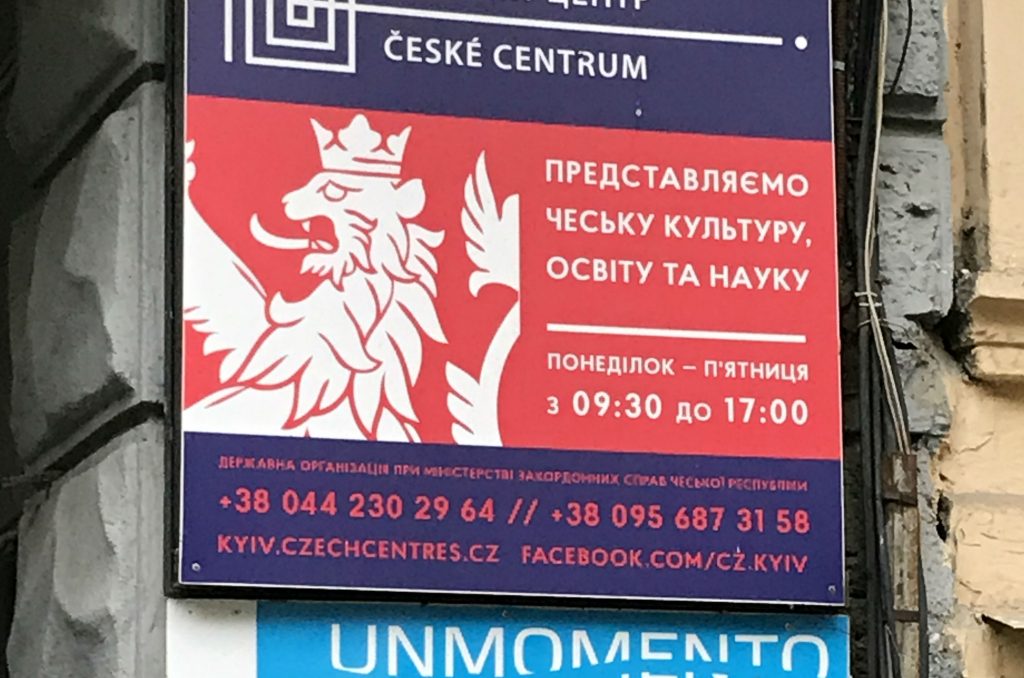 The Czech 'Cultural' Office on Kyiv's Ivana Franko Street, where they teach Czech to prepare Ukrainians to work there. Credit: James Brooke

One of this summer’s big lessons is that the image of Ukrainians has turned around in the region. As Central European governments fight to block EU-mandated quotas of asylum seekers from Syria and Iraq, Ukraine has emerged as the region’s source of desirable guest workers.

Czech, Slovak, Hungarian, and Estonian governments have set up recruiting programs in Ukraine. Poland’s government is changing its laws to bring in more Ukrainians, adding to the 1.3 million who are already working there.

On the pull side of the region’s push-pull equation, Central Europe is now Europe’s high-growth, low-unemployment zone.

The Czech Republic is the standout case, with only 2.9 percent unemployment—and monthly wages four times Ukraine’s $290. Quietly, Ukrainians have become the largest guest worker nationality there, numbering approximately 55,000, according to Tomas Petricek, the Czech Deputy Minister of Labor and Social Policy.

In neighboring Hungary, where wages have risen by 15 percent this year, 73 percent of manufacturers say they cannot find the workers they need.

“The government’s cautious labor market considerations have put us at a competitive disadvantage to Poland or the Czech Republic,” Laszlo Koji, chairman of the Federation of Hungarian Building Contractors, complained to Reuters earlier this year. He said he wants 2,000 Ukrainian construction workers as soon as possible.

In the monochromatic societies of Central Europe, “diversity” means Ukrainian.

Regional leaders do not disguise their preference for immigrants from the same racial, religious, and linguistic group as their own. Polish officials justified their rejection of Syrian refugees, alleging that Poland is taking in its share of Ukraine’s 1.6 million people displaced by the Russian-backed war in Donetsk and Luhansk.

Polish officials calculate that they will need up to five million Ukrainian workers over the next twenty years to maintain economic growth. Facebook sites such as ‘Strawberry Poland,’ alert Ukrainians to temporary harvest work in Poland.

“Poland’s labor market has tightened, with unemployment at record lows,” wrote Timothy Ash, a regional analyst for Blue Bay Asset Management in London. “But wage price pressure is being capped by the plentiful availability still of cheap labor from Ukraine.”

“Last year, 1.3 million Ukrainians went to Poland—we want them to stay here,” lamented Bilak, of UkraineInvest. “But Ukrainian workers are valued. They are less expensive and more skilled than in the other countries.”

The Baltic countries are also recruiting Ukrainians, stressing that they will not have learn a new language; they can get by using Russian.

On the push side, Ukraine’s growing labor migration to Europe is tacitly encouraged by President Petro Poroshenko . As Ukraine is unable to provide high-paying jobs before the 2019 elections, labor migration is a political quick fix.

The start of visa-free travel to the EU last June was greeted with billboards and a massive free concert on Kyiv’s Europe square. On August 29, Ukraine’s largest center dedicated to issuing foreign biometric passports and ID cards opened in Kyiv. Covering nearly an entire floor of a Ukrainian shopping mall, the center employs one hundred people and can process 1,500 citizens a day.

Ukraine’s state railway is inaugurating fast trains to Ukraine’s four EU neighbors: Poland, Slovakia, Hungary, and Romania. With one-way fares as low as $51 for the eighteen-hour ride from Kyiv to Warsaw, ridership on some lines is up six-fold from last year.

Ideally, Ukraine will eventually evolve from serving as Central Europe’s pool of reserve labor to having a healthy economy that benefits from the “labor force boomerang” that Poland and other Central European countries are now enjoying. When migrants return from such countries as Britain, they bring new skills, new self-confidence, and new money to start businesses.

But labor migration to the West is expected to continue unchecked.

In a survey conducted by the sociological group Rating that polled Ukrainians who went to work in EU countries and in Russia, 19 percent were “very satisfied” with their pay and 62 percent were “satisfied.” The most dissatisfied with the size of their earnings had gone to Russia.

This year, in a historic shift, labor remittances from Poland to Ukraine will surpass those from Russia. The Kremlin is helping to accelerate this trend by banning money transfers from Russia to Ukraine.

Watching Ukraine’s Western labor migration from the sidelines, Russia’s media comes up with its own headlines. In a mid-August report on Ukrainian labor migration to Europe, Pravda.ru ran this headline: “European integration brings more Ukrainian slaves to Europe.”

Based in Kyiv, James Brooke is editor-in-chief of the Ukraine Business Journal, an all-Ukraine, all-business, all-English internet news site, accessible at www.theubj.com.