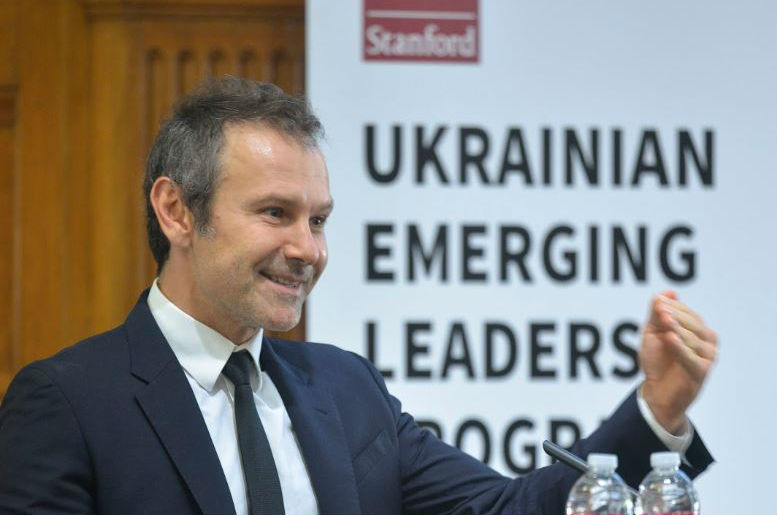 For months now, political junkies and ordinary Ukrainians have debated whether their beloved rock star Slava Vakarchuk will run for president in 2019. He’s got massive name recognition throughout the country.

Even more, he’s one of the only reform-minded candidates who might be able to unify Ukraine’s fractious opposition.

Last week I caught up with Vakarchuk at Stanford to celebrate the second class of its Ukrainian Emerging Leaders Program, an intensive 10-month program with just three spots. Vakarchuk participated in the 2017-2018 program, attending classes and living in California for much of the academic year. (He even claims that he read Francis Fukuyama’s dense tomes on the nature of the political order.)

I’d seen Vakarchuk three weeks earlier at the Yalta European Strategy meeting and was decidedly unimpressed. Interviewed by BBC HardTalk presenter Stephen Sackur, Vakarchuk’s remarks were unfocused and not ready for prime time. He was also underdressed, something I pointed out.

During a coffee break in Kyiv, Vakarchuk was nothing but charming, even telling me that he reads the UkraineAlert blog and promised to give me an interview.

However, at Stanford, he didn’t want to talk on the record, even if I promised not to ask him the question that he desperately wants to avoid.

At this point, his candidacy is becoming a farce. He’s been waffling for more than six months. While he talks a good game—he prefers the term statesman to politician—it’s worth pointing out that statesmen are decisive.

On October 2, in Palo Alto, the rock star told Stanford’s new fellows and a crowd of 120 people, mostly Ukrainian diaspora from the San Francisco Bay area, that he wants the fellows and people like them to run the country. He’s sick and tired of the old ways.

But much of his short remarks—cribbed together on an iPhone—were grandiose and vacuous. They could have been pulled from Leadership for Dummies. For example, have thick skin.

Most observers aren’t convinced that this nugget of wisdom is something the rock star has embraced himself. Rock stars aren’t known for their Teflon-like coverings. During the YES conference, his inquisitor managed to rattle him with basic questions.

Vakarchuk would be well served by talking about specific policy issues, even when he’s in the United States. He does in print, but in public appearances, he prefers vague concepts.

Some insiders think that Vakarchuk may be a presidential test balloon meant to take up all the oxygen in the pre-election period so there’s no room for other reform-minded candidates with less name recognition. I find that implausible. Vakarchuk is nothing but earnest, and from what I can tell, has little taste for the current elite.

As other reform-minded candidates begin the process of unification—the Lviv-based political party Samopomich announced that it will join forces with DemAlliance today—Vakarchuk needs to get in the game now, or he may miss his opportunity altogether.