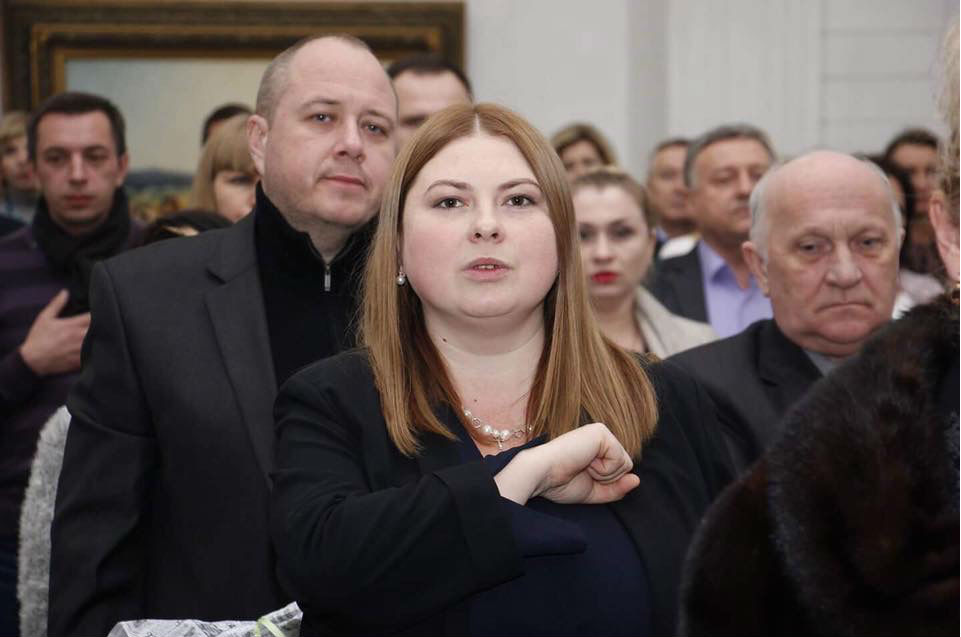 Kherson activist and public administrator Katya Handziuk in an undated photo. Handziuk died in November 2018 after being attacked with acid in July. Credit: Viktor Handziuk

Viktor Handziuk speaks softly about his only child, daughter Kateryna, and how she defended classmates from bullies when growing up.

Kateryna grew and took on Ukraine’s bullies by participating in the Orange and Euromaidan Revolutions and by becoming a lawyer and public administrator in Kherson, a city of 290,000 just one hour from Crimea.

But on the morning of July 31, her valiant efforts ended when a young man poured a liter of sulfuric acid on her as she got into her car. The motive was to silence her public accusations that top local officials were making tens of millions of dollars from the illegal harvesting of wood from public lands.

“We talked about the dangers, but this was her life, her personality,” said Dr. Handziuk in an interview in Toronto last week. Canadian Ukrainians flew him over to talk with politicians and the press about Katya’s final months and his efforts, along with others, to try and get justice.

The July attack burned 40 percent of her body and left her in critical condition. The next day friends chartered a private jet to move her to a hospital in Kyiv.

“Katya did not talk to the local police because she did not trust them,” said her father. “In Kyiv, the only official to meet with her was [Yuriy] Lutsenko, the prosecutor general, and she gave him information and asked him to give the case to the Security Service (SBU). He did not. Until her death [three months later] no one else was interested or visited with her.”

Inaction was met with constant pressure by Katya’s fellow anti-corruption activists who launched investigations and staged a series of protests at political and soccer events. Even the US Embassy became involved and released statements and videos to add to the pressure.

On August 3, local police arrested a man, but Ukrainian journalists found he was away from Kherson at the time of the attack. He was released nineteen days later. Then in late August, five men were arrested and four later admitted their guilt.

“Everything that has happened, which is positive, is because of the constant pressure. If no pressure, they would have put an innocent person in jail,” said Dr. Handziuk.

Despite her pain, Katya assisted with the investigation of her attackers and of corrupt politicians behind it. On September 27, she even appeared on a giant screen, her head shaved and covered in burns, during a protest at the Presidential Administration in Kyiv. She joked that, despite her appearance, she still looked “better than justice and the rule of law in Ukraine.”

That fall, she was named one of the 100 most influential women in Ukraine, but on November 4 she died. The next day, her friends published on Facebook the name of a prominent official, related to Poroshenko’s political party. In November, the Security Service of Ukraine (SBU), based in Kyiv, took over the investigation which is what Handziuk had wanted from the start, and arrested the official.

“Even when she died no officials said anything,” said her father. “It was not until I went to the investigation committee at the Rada, and stated the names that Katya said ordered the murder, that everyone started reacting. I named two members of Poroshenko’s party who were involved in the forest scandal, Governor Andriy Gordeev and his Deputy Yevhen Ryshchu, and I named Vladyslav Manger, head of Kherson Oblast Council, who organized her murder and was a member of Tymoshenko’s party.”

On February 9, Tymoshenko’s party Batkivshchyna expelled Manger from the party and on February 11 he was charged and jailed for organizing the murder. He was released immediately on bail. The other two have also denied involvement and have not been charged.

“The three should have been forced to step down from office, but the president has not done this and is afraid to do so before the election,” he said. “The presidential system basically sells out territories to certain people so that those people stay loyal. This is why corruption is unbeatable in Ukraine, it’s flourishing.”

Just six months after Katya’s hideous death, illegal logging has resumed in the nearby forest, according to reports.

Police have charged four young men, former members of a militia, with the attack after they have admitted involvement. They said they were told Katya was “pro-Russian” and “anti-militia” and were paid between $300 and $500 apiece. In total, investigators have named eight suspects in the attack and arrested six, according to the Kyiv Post.

But Dr. Handziuk will continue his crusade, along with Katya’s friends and admirers. “I just want to see all those responsible for her death behind bars,” he said.

The tragedy also took its toll on Katya’s “despondent” husband. He walked away from his successful business in Kherson and joined a militia to fight in the war against Russia.

“I miss her and cry a lot,” he said. “Justice was very important to her and we were very proud of her.”