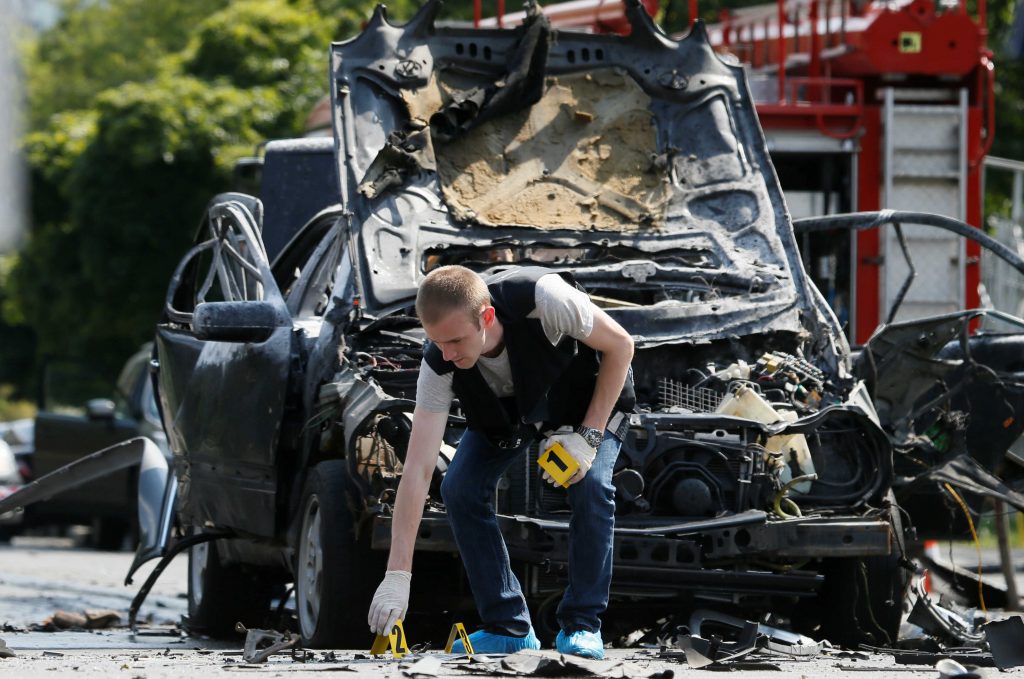 Russia is targeting the most capable and dedicated parts of the Ukrainian military.

On June 27, Colonel Maksim Shapoval, commander of an elite Ukrainian military intelligence unit, was killed when his car exploded during his morning commute in downtown Kyiv. A few hours later, a massive cyberattack took out computer systems across the city. The next day another car bomb killed a colonel in Ukraine’s Security Service while he was traveling in eastern Ukraine.

“Russian state-sponsored terrorism is on the rise in Ukraine, which is a much more dangerous phenomena than that conducted by ISIL sympathizers in Western Europe, simply because the capabilities of the Kremlin are a thousand fold of those of ISIL,” Ihor Kozak said in a recent interview.

Kozak, a Canadian defense and security expert, said that the world needs to pay attention before the situation deteriorates even further, and hold Russian President Vladimir Putin accountable.

Kozak knows the Ukrainian military well. He just returned from the frontlines, where he spent a week embedded with Ukraine’s Special Forces units and volunteers near Krasnohorivka, Mar’yinka, Avdiivka, and other locations west of Donetsk, which have been under increased attacks.

“On the one hand, I’m very impressed and encouraged by what I’ve seen compared to my previous visits to the frontlines in 2015 and even 2016,” said Kozak, referring to Ukraine’s combat readiness. “It’s amazing how professional they’ve become,” he said, adding that the difference is like “night and day.”

Kozak, a retired Canadian military officer, sees a huge paradigm shift in Ukraine’s military. At the beginning of 2014, not only was Ukraine’s military ill equipped and poorly trained, it still used the old Soviet ways of planning and conducting military operations with centralized command and centralized execution. People were afraid to make decisions during Soviet times and this hesitation carried into recent years; generals in Kyiv made all decisions, not majors and lieutenant colonels on the battlefield. But that has changed now, and the Ukrainian army is adopting NATO standards, giving more junior officers and non-commissioned members significantly more control over tactical decisions. Kozak said that a centralized command and decentralized execution system means a faster response and fewer casualties.

In June, Canadian defense and security expert Ihor Kozak (right) stands on the line of demarcation between Ukraine and the occupied territories outside of Kranohoroivka. Here he speaks with Serhiy Kuzan (center), a Ukrainian volunteer who specializes in the delivery of humanitarian aid to the war-torn regions of Ukraine, and a Ukrainian Special Forces commander (left). Credit: Ivan Bratsiun.

Kozak saw other bright spots in eastern Ukraine. There’s much more acceptance of Ukrainian troops by local residents in the frontline areas; increasing numbers of farmers are giving food to the soldiers or local businessmen provide them with generators for electricity.

During his visit, Ukrainian troops took cases of cookies to a village school near Krasnohorivka, which was shelled by the Russia-backed separatist forces on May 28. The shelling hit a hospital and a school, and injured at least eight civilians. School children were given a chance to meet and talk to Ukrainian soldiers. Kozak said there was some resistance from several parents, who were still suspicious of the Ukrainian troops’ intentions, but overall it was “very positively received.”

Still, Kozak sees room for improvement. “I haven’t seen enough from the centralized government in Kyiv” when it comes to winning over local populations’ hearts and minds, he said.

There have been rumors that Ukrainian troops are demoralized and don’t like President Petro Poroshenko. Kozak said in his conversations that the troops he spoke with had high morale and are committed to fighting until the end.

But when that will be is unclear. “Putin is a very good tactician,” he said. In the end, the future of the conflict “all comes down to geopolitics and what Putin wants to do.” He added that the situation on the ground is to Putin’s advantage. The Kremlin uses the war to channel attention of the Russian population elsewhere, as a bargaining chip in its dealings with the West, and as a training ground for new weapons and for fighters (some of whom are eventually sent to Syria).

Lethal defensive arms, which the West is yet to provide to Ukraine, aren’t enough to combat the Kremlin’s forces, he said; serious sanctions are also needed. Kozak is encouraged that Speaker Paul Ryan met with the Ukrainian Speaker of Parliament Andriy Parubiy on June 15 in Washington and signed a memorandum of understanding calling Ukraine “more important than ever.” Kozak was also encouraged that the Senate passed a bill on June 14 that would preserve US sanctions on Russia and put more restrictions into place.

Since 2014, the US has provided at least $1.3 billion in foreign assistance plus another $3 billion in loan guarantees.

In 2015, the US gave Ukraine about two hundred old Humvees from the 1980s and 1990s that were in poor condition and lacked spare parts. While some soldiers said that the poor quality called into question the US’ commitment, Kozak said that the donation still mattered. “Ukrainians are very resourceful,” he said, pointing out that they took parts from other cars and refashioned them to fix the Humvees.

Canada has also been a big supporter. This year, the country came close to decreasing its military assistance, but in March it decided to extend its current training mission in Ukraine for another three years. Under the new program, Canadian soldiers must stay away from the frontlines but are free to go anywhere else in Ukraine. According to the Kyiv Post, the Canadian military has trained 4,450 Ukrainian soldiers as of June 2017.

One of the arguments that persuaded the Canadians to stay put is that the experience is good for its own soldiers. “It’s a two-way street,” Kozak said. NATO and Canadian troops have a real opportunity to learn from troops who have been on the frontlines with the Russians, he said.

Image: An investigator works at the scene of a car bomb explosion which killed Maxim Shapoval, a high-ranking official involved in military intelligence, in Kyiv, Ukraine, June 27, 2017. REUTERS/Valentyn Ogirenko