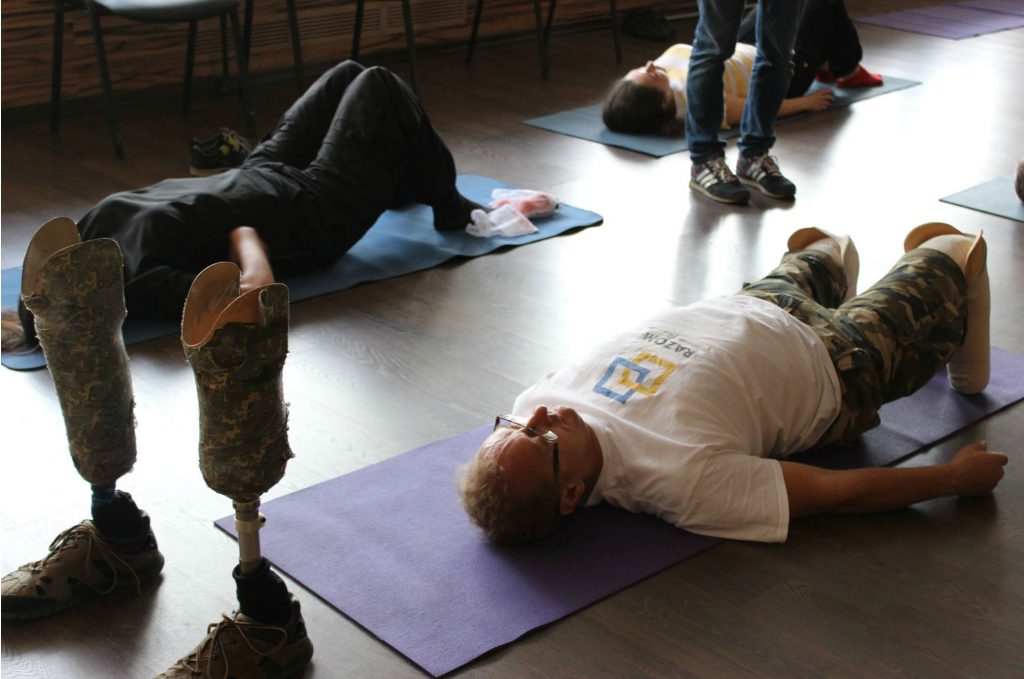 Late on the night of September 6, Oleksiy Tomilko posted a short line on social media: “Perhaps someone wants to visit me.” He was a fifty-year old soldier who had been brought to a military hospital in his native city of Lviv after he had been wounded in the Donbas, where Ukraine has been fighting Russian aggression since 2014.

Many people answered Tomilko’s call, thanking him for his bravery with small presents and homemade delicacies. But despite the warm welcome and his wounded leg, Tomilko doesn’t see himself in peaceful, civilian life: he wants to get back to the military zone.

“The only thing I want is to return to the east,” he explains. “There is nothing to do here. There, everything is clear.”

Maksym Klokun, twenty-seven and from Kyiv, remembers this pull toward life on the frontline very well. Even after losing his leg three years ago, he still had an itch to continue military life. Now, Klokun knows that this magnetism is a part of post-traumatic disorder.

“When I was in the car driving in the town for the first time, I didn’t understand how people could just walk on the streets and laugh when there was war in the country. I was watching the roofs because I believed there were snipers who would try to kill me,” Klokun says, recalling his first impressions of peaceful life.

Adjusting to his previous life was difficult. He had nightmares and flashbacks, was depressed and suspicious, and like many of his peers, started drinking alcohol to excess. Max needed help—and he got it, from a young NGO called Wounded Warrior of Ukraine and later renamed Warrior’s Heart.

The organization started in April 2015, at a small party in New York where young professionals from Ukrainian and Russian diasporas collected money for veterans from the Anti-Terrorist Operation in the east. They raised $10,000 to organize a sixteen-day course for PTSD rehabilitation.

A key founder of the project was Russian emigrant and Harvard-trained biomedical scientist Roman Torgovitsky, forty-one. An active supporter of Ukraine’s 2014 Revolution of Dignity and the country’s Western intentions, Torgovitsky wanted to help Ukraine. A former facilitator in the Israeli-Palestinian conflict, he had experienced PTSD himself.

“It is very hard for soldiers to return back home, as their world that is built at war on concepts of honor, dignity, and honesty is ruined in peaceful life. They return to a world where there is skepticism, lies, corruption. So their sense of duty causes an emotional breakdown, as they went to the war because of values,” tells Torgovitsky.

His plan was to build a system where veterans would support each other on the basis of a camaraderie-oriented pyramid structure. He invited Dutch psychotherapist Ditty Marcher, who has designed such a course and put it on trial at home, to hold a training in Kyiv. The veterans were selected on the basis of their ability to later lead the same training.

“You don’t trust an ordinary psychologist who hasn’t been to war as much as you trust a buddy who is the same veteran as you,” says Klokun, one of the course’s first graduates. “Now, when I talk to the veterans in the hospital they are not ashamed to cry in front of me. At these moments we both feel relief.”

Since the first course in December 2015, the program has grown and transitioned from focusing on the mind to the body. “First, we deal with primary problems. Soldiers usually are not ready to talk to the psychologist, but somatic problems don’t have a stigma,” Torgovitsky explains. “When veterans are asked who they prefer to visit, a massage therapist or a psychologist, no one opts for the psychologist. But when we deal with primary body pain, then the veterans open up and tell about the psychological troubles of integration into peaceful life.”

As of April 2017, over 300,000 veterans have been demobilized after serving in eastern Ukraine, according to a World Bank report. It is projected that up to 30,000 people per year will continue to join the ranks of veterans if the conflict continues. Many of them have trouble re-acclimating to civilian life, and many experience PTSD. According to the same report, 23 percent of all Ukrainian veterans have accessed some form of psychosocial assistance. However, most have found this to be both inappropriate and substandard.

But by relying on volunteers alone, Torgovitsky could not engage an essential number of veterans. In 2016, the organization received support from USAID and the National Endowment for Democracy, and conducted trainings across the country for almost 3,000 returnees—only one thousand fewer than the whole state psychological rehabilitation program had treated as of September 2017.

“These were only five-hour trainings,” says Torgovitsky. “It is a very small amount of time. But during this time, people can explain [to the veterans] what happened to them during the war. They think they don’t change, but they do. And if veterans recognize this, it is the first step to healing.”

Recently this year, nearly thirty people gathered in Kyiv for a new recovery training. Some had lost limbs on the frontline and have already undergone rehabilitation, but they are still learning about their bodies. And they will also be learning to once again trust others and believe in themselves.

Nowadays Torgovitsky, his friends, and the organization’s supporters collect money for the courses through social media. Donations to support Warrior’s Heart vary from $10 to $500. To continue the program, Torgovitsky moved from Boston to Kyiv, essentially giving up on his American business. “Sometimes, I burn out,” he confesses. “But then I recollect veterans’ impressions after the training, their relaxed inflamed eyes, and this gives me energy. Also, I promised myself never to forget what people died for at the Revolution of Dignity. This is how I keep faith.”