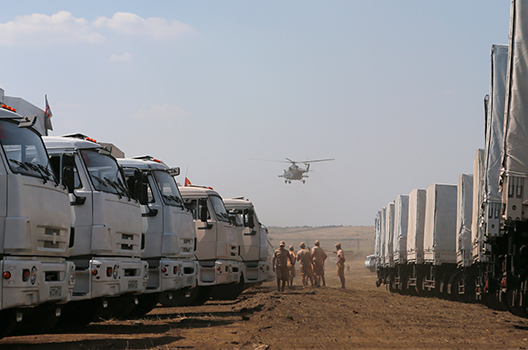 As Russia’s government moves its proposed convoy of humanitarian aid toward the war zone in Ukraine that it has created with its support of separatist militias, Ukraine and Western governments are warning it not to try using Russian military forces on the border to push the purported relief supplies into Ukraine. Atlantic Council analysts say Putin’s dispatch of the convoy signals he may try some effort short of a conventional invasion.

While the Ukrainian government has estimated the Russian force on the border at 45,000 troops and warned of the danger of a frontal invasion, the Atlantic Council’s senior fellow and Ukraine analyst Adrian Karatnycky says Putin’s choice of tactics “is a sign that he’s chosen not to go in guns blazing.”

If Russia sends in its forces – even as escorts of the aid convoy in a “humanitarian intervention” – the US and its allies have signaled to Putin that they will escalate the economic sanctions that already are punishing the Russian economy, the Council’s director for Eurasia, John Herbst said. President Barack “Obama has … been clear, along with our European allies, in labeling a Russian ‘humanitarian intervention’ aggression,” Herbst said this week in comments to the Ukrainian newspaper Den’. “If Russia launches such an operation, it will be subject to more severe sanctions … and “increases the odds of a stronger NATO reaction.”

“Like the threat of sanctions, this will give Mr. Putin reason for caution.  But given his willingness to take risks, that does not mean he will be cautious,” said Herbst, a former US ambassador to Ukraine.

Putin Seeking a Plan ‘B’

Ukraine’s military advance against the Russian-sponsored and Russian-armed rebel militias in southeastern Ukraine’s Donbas region is turning back Putin’s initial strategy for a proxy war to seize a significant chunk of Ukrainian territory. Ukraine’s forces have “taken over about 60 percent of the territory formerly held by the rebels,” Karatnycky notes in a video interview this week with the Wall Street Journal.

The Russian proxy forces, who once controlled the lives of about 4.5 million Ukrainians, now control “about 2 million” people, Karatnycky said.

Russia repeatedly has reinforced the rebellion with covert deliveries of arms across the border, and Ukraine has signaled it will guard against any such move – and against a Russian move to build political support in Donbas – with the proposed aid delivery. “The Ukrainians are going to figure it out,” Karatnycky said. “They’re saying those trucks are not crossing the border. They’re going to be off-loaded and [the cargo] put onto Ukrainian trucks. So whatever Putin wanted to do, they’re not letting him come in with a PR exercise.”

A key failing of the of the Russian-sponsored rebellion in Ukraine’s Donbas is its failure to attract younger residents to join, Karatnycky said. “The basic divide is people 50 and over,” who have offered support for Russia’s attempt to establish Russian domination or direct rule over Donbas, “and people 40 or 30 and younger. The insurgents say that they can’t recruit people in their 20s and 30s, people who grew up after the collapse of communism. They’re recruiting … mercenaries, criminals, [and] … people in their 40s and 50s.  It’s an old insurgency, … made up of people who grew up under Soviet rule” and thus the dominance of Russia, Karatnycky said.

“Putin’s propaganda works with those people in Ukraine; it doesn’t really work with the younger generation.”

James Rupert is an editor with the Atlantic Council.