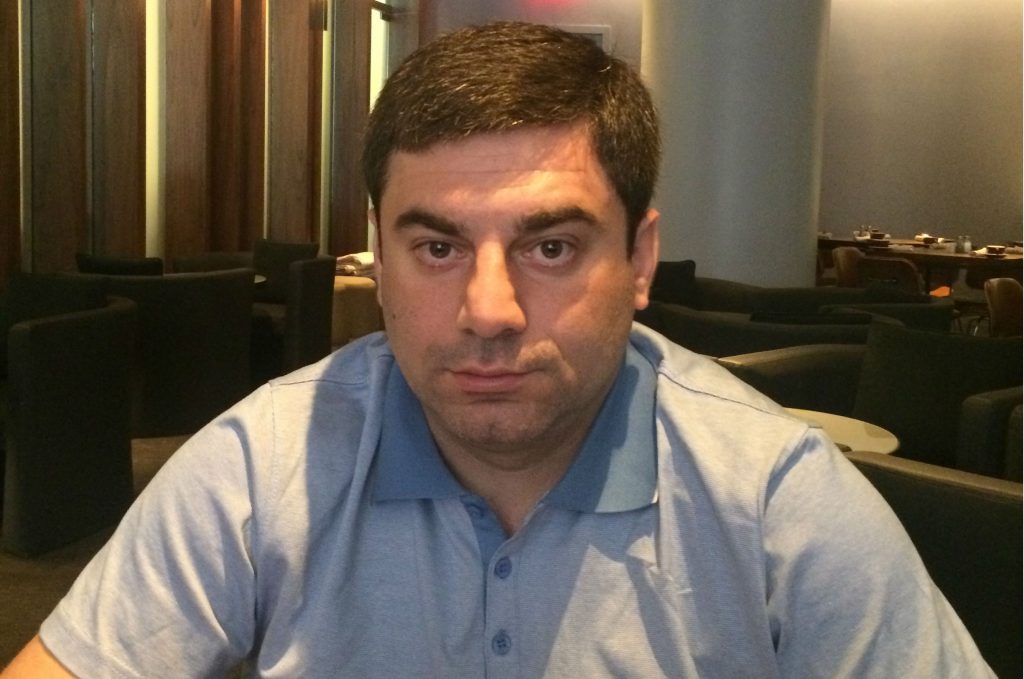 World attention focuses on ISIS and Iran, with its half an atomic weapon. But the biggest geopolitical issue is Vladimir Putin, backed by thousands of nuclear weapons, who is gradually conquering Ukraine, a democracy with 45 million people the size of Germany and Poland combined.

In just over a year, Russia has seized 9 percent of Ukraine, killed 6,200, wounded 30,000, displaced 1.38 million people, and shot down a commercial airliner with 298 people aboard.

Even so, European and American retaliation has been soft, and ineffective. The Russians have ignored a February ceasefire agreement and captured another 28 towns and villages, 250 square kilometers, and killed 200 Ukrainians. It’s also moving tanks, artillery, troops, and equipment into Ukraine by the trainload.

“The struggle in Ukraine is more serious than ISIS,” said John Herbst in an interview. He’s a former US ambassador to Ukraine and Director of the Eurasia Center at the Atlantic Council in Washington. “It’s very simple. Any military thinker looks at a threat—what is the [possible] damage? Putin wants to change the peace established in 1991 and after World War II.”

So far, diplomacy and economic weapons haven’t stopped Putin. He grabbed one-third of Georgia in 2008 using the same tactics and despite hideous publicity worldwide is riding high in Russian polls. But slowly, in Washington, bipartisan support builds to provide defensive weapons to the Ukrainian army as soon as possible to halt the Russian creep. Canada’s Defense Minister Jason Kenney has stated boldly that Canada supports supplying Ukrainians with weapons but cannot do so unilaterally.

“Putin wants all of Ukraine,” said Ukrainian MP Dmytro Lubinets, a Russian-speaking politician from eastern Ukraine who believes the Russians are gearing up for an all-out invasion of Ukraine as early as this fall. He lives twenty miles from the current front and one-third of his constituency is in occupied lands. In January, he led a gigantic peace march in Kyiv after Russian artillery blew up a civilian bus in his town killing 15 civilians.

“The question is not whether the offense will occur but when,” he said in an interview in New York City. “There are tens of thousands of men and 1,000 tanks. Tanks are not for defense. They are for an attack. We do not even have anti-tank missiles.”

He dismisses Putin’s claims that Russian military is not involved, that this is not an occupation, and the spontaneous effort by Ukrainian residents of Russian descent who want liberation and to rejoin Russia.

“It’s just not true. 90 percent of the people in Donbas do not want to be under Russian rule. I am Russian speaking and part Russian and I identify as Ukrainian,” he said. “This is not a war between two nations, Ukraine and Russia. It is a struggle between two worldviews—Europe and Moscow. We want Ukraine to be a European country, not a Putin country.”

“This is why 1.2 million people have fled the occupied areas. They haven’t fled Ukraine for the Russian areas,” he said. “I meet and speak with people who still live there and who have fled. The main message is ‘we never would split or separate from Ukraine.'”

Refugees are a financial burden for the country and many have moved in with relatives and friends. For instance, his hometown of Volnovakha, near the 130-kilometer long front, had a population before the war of 25,000 and now has 35,000 residents and 5,000 soldiers stationed there.

He said that Ukraine is carefully checking those entering from the east in fear that Russian agitators will try to destabilize Ukraine in order to create a pretext for an invasion.

“It was really simple. Buses came from the Russian Federation. Two thousand Russian citizens went to Donetsk [in the Donbas] to a separatist rally. They march downtown or to the city hall, pulling out tricolor Russian flags and waving them. They tear down the Ukrainian flag at administrative buildings, put up the Russian flag, and get the television cameras to provide an image to the rest of the world,” he said. “Then they hold a fake referendum.”

Using that strategy, he said, they will create trouble in Kyiv on the Maidan [Kyiv’s main square]. “Another [violent situation on the] Maidan and the Russians will occupy the country,” he said.

His wife, children, and extended family remain in their village, but the family has an evacuation plan to stay with relatives in western Ukraine if the Russian tanks roll westward.

In the face of the well-equipped Russian onslaught, the Ukrainian military is trying to rebuild quickly after being dismantled by the Moscow-controlled former President who fled last year. He looted the country financially and also appointed a Russian as defense minister who sold off the military’s best equipment to foreign dictators for personal gain.

The country conscripted 50,000 men for military service this summer and United States, Canada, and Britain are supplying hundreds of military trainers and non-combat equipment. There is political support to stand up to Putin, but not enough yet.

Few members of the public know where Ukraine is much less its size and strategic importance. The country is the third most educated populace in the world, with thriving software, aeronautical, pharmaceutical, and agribusiness sectors. It also has one-third of the world’s most productive farmland.

“One US Senator asked me why he should care and I said in 1938, when Germany annexed part of Czechoslovakia to liberate Germans you didn’t care. When it annexed Austria you didn’t care, then Poland. But then you did care and 400,000 Americans died. It’s the Donbas and nobody cares. But the US will wake up when the Russian Federation attacks a NATO country,” he said.

This will happen, he speculates, unless Ukraine is saved. If not, the occupation will spread and casualties will too.

“Ukraine will win,” he said defiantly. “The only question is how many will have to die. Now it’s thousands. If left alone and defenseless this will total millions. But no matter the price, Ukraine will win.”

Diane M. Francis is Editor at Large with the National Post in Canada, a Distinguished Professor at Ryerson University’s Ted Rogers School of Management, and author of 10 books.

Image: “Putin wants all of Ukraine,” said Ukrainian MP Dmytro Lubinets, a Russian-speaking politician from eastern Ukraine who believes the Russians are gearing up for an all-out invasion of Ukraine as early as this fall. He lives twenty miles from the current front and one-third of his constituency is in occupied lands. Credit: Diane M. Francis