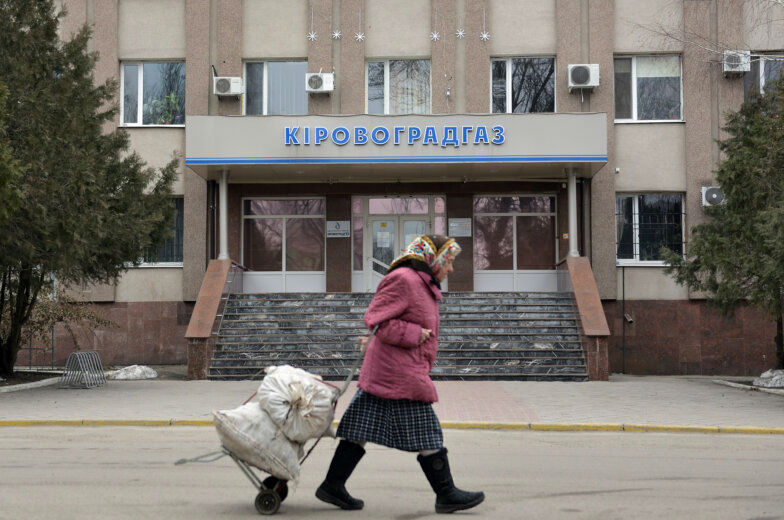 Fictional houses, “dead souls,” but real embezzlement — it sounds like the plot of a horror film. But it’s actually a corruption scheme that ran for over eight years in Ukraine’s Kirovograd Oblast.

From 2009 to 2017, the management of the regional gas distribution company, Kirovogradgaz, inserted hundreds of fictional addresses into its electronic billing system, according to a police filing. As a rule, the addresses were nonexistent houses with fake house numbers located on real streets. The fake houses were occupied by imaginary residents. Each fake house came with an account number, also fictional.

In those more than eight years, these “dead souls” — named after the novel by 18th century Ukrainian writer Nikolai Gogol — “consumed” 9.8 million cubic meters of natural gas subsidized for household consumers and worth around $2.83 million. While it is impossible to trace where that gas went, few have any doubts: it was resold to industry at a markup.

Energy sector specialists had long suspected that this scheme existed. However, it was only revealed after June 2017, when Ukrainian state gas company Naftogaz, which owns 51 percent of Kirovogradgaz’s shares, was able to wrest control of the company from its previous management.

This plot is the subject of my latest investigation for the Kyiv Post, and it offers a window into the type of scheme that many believe is still operating across Ukraine.

For this reason, it may be instructive for people seeking to understand energy corruption.

The following are four takeaways from the story of Kirovogradgaz:

Few Ukrainians are surprised to hear that a gas distribution company was selling gas to imaginary people. To them, it’s the same old scheme.

That’s a fair point. It’s not far-fetched to expect corruption in a convoluted industry that has enriched Ukraine’s elite, a sector where Dmytro Firtash — an oligarch currently fighting extradition to the United States on bribery charges — controls over 70 percent of the regional gas distribution companies, or oblgazes in Ukrainian.

But it also misses the importance of the Kirovogradgaz case: the company’s new management has proven that this scheme exists and is now trying to bring the perpetrators to justice. The General Prosecutor’s office is investigating the case.

Formally establishing this scheme’s existence makes it easier to figure out where else it may be operating. Since Kirovograd Oblast is a largely rural region, its demand for gas for industry is likely less than in many other parts of Ukraine, which means the same scheme is probably happening everywhere.

Or, as Naftogaz’s business development director Yuriy Vitrenko told me, there’s “no reason to believe that [this region] should be an exception.”

2) Liberalizing the gas market is important (but not everything).

Since November, the Ukrainian government has increased gas prices for household consumers, a key demand for continued International Monetary Fund financing. Now, household prices stand at roughly 65 percent of industrial ones, according to Oleksandr Kharchenko, who heads the Energy Industry Research Center in Kyiv.

Vitrenko, Kharchenko, and Alexander Gladky, who now heads Kirovogradgaz, all believe that liberalizing pricing will annihilate the “dead souls” schemes. When households and industry pay the same price, there’s no incentive to resell household gas.

That’s likely correct, but there are some other issues. Many Ukrainians cannot afford to pay market prices. This is particularly true for pensioners and residents of smaller cities with less economic opportunities.

Unsurprisingly, gas price hikes are unpopular. But utilities subsidies will continue — after all, around 65 percent of the Ukrainian population uses them. However, starting in March, they will be monetized, meaning that household consumers will receive money to help them buy gas at a higher price.

That is an important step, but the Ukrainian government must ensure that subsidies not only continue to exist formally, but are also accessible to the people who need them. Otherwise, the transition to monetized subsidies will hit poor Ukrainians as hard (or harder) than it does corruption.

Ukraine’s gas sector can be imagined as a three-story building. On the top floor, sits Naftogaz, which sends gas down to the second level, the oblgazes. They, in turn, send it down to the local heating companies and consumers. The oblgazes should then receive money from the ground level and pass it on up to Naftogaz.

But that often does not happen, leading to significant debts — a huge problem in the gas sector.

Naftogaz blames the oblgazes, largely owned by Firtash, for this debt. His company then blames the municipal heating companies. In the past, I thought this was likely an excuse.

However, in studying Kirovogradgaz, I learned that the distribution company’s post-2017 management has also found itself in conflict with heating companies. When both Firtash-owned oblgazes and a Naftogaz-owned one are having the same problems with heating companies, there are clearly some real challenges in relations between different levels of the gas system.

Ukraine has no unified register of natural gas consumers, which makes it extremely difficult to tell why debt is accumulating. In January, Naftogaz CEO Andriy Kobolyev proposed creating such a database.

In my time covering energy in Ukraine, I have heard different explanations for why no such database exists. Some allege the distribution companies simply don’t want anyone to know where the gas is going, while others claim it’s an issue of intellectual property. One expert told me that the distribution companies are afraid that, with a database, Naftogaz will try to enter their market and become a competitor. I’ve also been told a database would violate consumers’ privacy.

In the face of such blatant corruption, not to mention excessive consumption, these arguments look weak. Ukraine must have a way to track where natural gas is going. That means it must be open to the key players in the gas sector and to law enforcement.

Ukraine needs a unified database. Without this and other significant reforms, gas sector corruption schemes will continue to rob taxpayers and leave ordinary Ukrainians worse off. As Kirovogradgaz has shown, it’s not particularly complicated.

Matthew Kupfer is a staff writer for the Kyiv Post.

Editor’s note: To learn more about the Kirovogradgaz corruption scheme, why it’s likely operating elsewhere in Ukraine, and how it affects the local population, read “In Ukraine, gas is even sold to people who don’t exist” from the Kyiv Post’s February 22 issue.

Image: An old woman pulls a cart as she passes the regional gas distribution company Kirovogradgaz in the city of Kropyvnytskyi on February. 20. Kirovogradgaz's previous management allegedly stole $2.8 million worth of gas subsidized for domestic consumers and likely resold it to industry from 2009-2017. Credit: Olena Karpenko/Kyiv Post