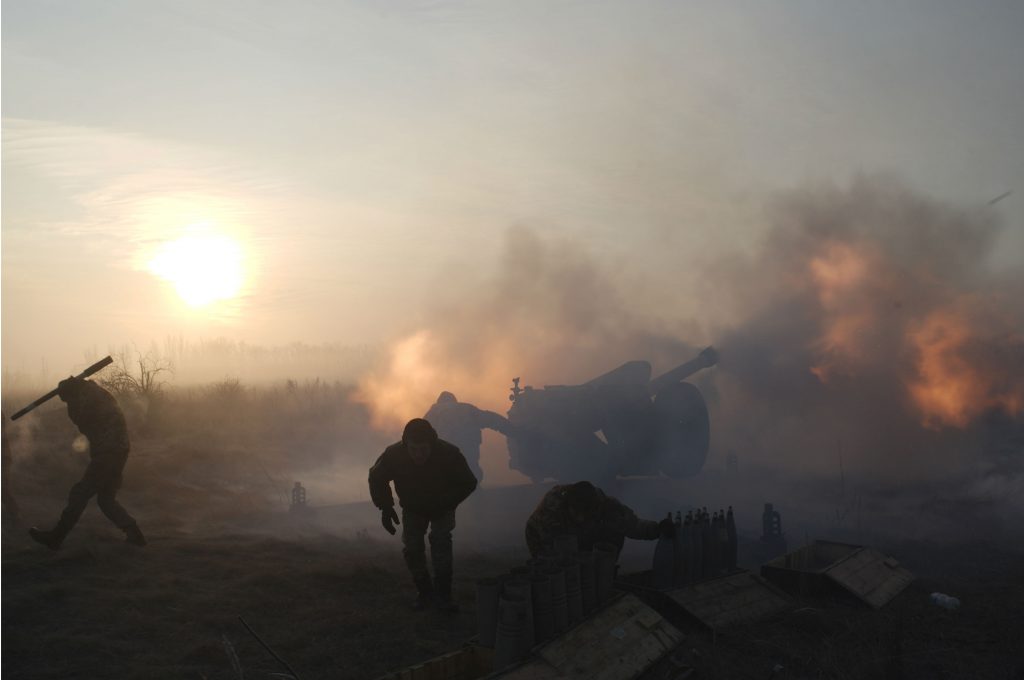 Ukraine wants to reframe its approach to resolving the ongoing conflict with Russia. Beginning last month, the military is now in charge of ground operations.

The launch of the Joint Forces Operation (JFO) replaced the four-year Anti-Terrorism Operation (ATO) and marks Ukraine’s shift to a more active defense. President Petro Poroshenko thinks that the new combat operation should more effectively coordinate the defense and security agencies and restore Ukraine’s territorial integrity in the long run. The move also demonstrates that Poroshenko’s administration hasn’t abandoned the Donbas and is serious about winning it back.

Covering a much larger area from the Donetsk and Luhansk regions to the Azov seashore, the JFO is a set of military and legal measures to counter Russian aggression. The joint forces’ initial priority is to stabilize the situation and “stop the unpunished attacks and casualties,” according to joint forces commander Lieutenant General Serhiy Nayev. The ultimate goal is to liberate the occupied territories.

The JFO was established by a law which redefines Ukraine’s national security policy toward the Donbas by renaming the conflict in the east “Russian armed aggression” and the uncontrolled territories as “temporarily occupied.” Although the law doesn’t officially acknowledge the war, it recognizes that Ukraine is fighting Russian regular troops and Kremlin-backed mercenaries, not local separatists.

Countering Russian aggression is a more accurate objective that reflects the reality on the ground, better than the ATO did. The ATO was introduced in April 2014 to avoid declaring martial law, which the transitional government at the time didn’t have the authority to do, and to hold elections that formed the new internationally-recognized government. With the indispensable help of volunteers, the ATO mobilized Ukraine’s poorly supplied and underequipped forces at short notice to deter further aggression and liberate about two-thirds of the occupied territory. But it became a misnomer when Russian regular troops intervened, and it outlived itself in duration and scale.

Russia’s continued military presence in Ukraine, the constant shelling, its use of banned weapons, and its consolidation of forces on the border requires a prompt response by the Ukrainian military. The ATO, which was run by Ukraine’s Security Service (SBU), hindered that. Actively engaged military forces were nominally subordinated to the SBU, which was impractical. There was uncertainty regarding the chain of command, significantly delaying decision-making. The situation has long required a centralized command.

This has been fixed by transferring the control from the SBU to the Joint Operational Headquarters (JOH) of the Armed Forces under the strategic guidance of the general staff. All military and law enforcement forces involved in the operation are now subordinated to the JOH led by Nayev.

According to Mykola Sunhurovskyi, director of military studies at the Razumkov Center, the new structure should make control of the armed forces more operational, thus “markedly reducing response time,” he says. The JOH already reports improvements. The new equipment cuts detection, verification, and response time down from three days to two minutes.

Former President Leonid Kuchma says that the change should bring “more order” to the frontlines.

Critics though worry that the extended powers (for example, the right to search, detain, use private property, restrict movement in some areas, and even use arms if needed) given to the military contravene Ukraine’s constitution and can potentially be abused.

Some are puzzled by the intention of the new operation: is it defensive or offensive? The separatists perceive it as Ukraine’s preparation for advancing. Ukraine’s Defense Minister Stepan Poltorak rules out a large-scale offensive as a way of retaking the occupied territories but asserts that Ukraine will use its sovereign right to self-defense.

Lt. General Nayev assures that “the operation is aimed to establish peace and remove artificial dividing lines—not to fuel the conflict, but to accelerate its completion.” But, he says, it also means that Ukraine “won’t tolerate shootings at Ukraine’s positions…and will give a rigorous and imminent response to provocations.” The new command and control structure and the delivery of Javelin anti-tank missiles were necessary steps in that direction.

Given the obvious imbalance of forces between Ukraine and Russia, the Ukrainian government has focused on diplomacy to coerce the Russian-backed forces to abide by the Minsk Agreements, mainly to ensure the implementation of a full package of security measures. But the key points—a lasting ceasefire and the withdrawal of heavy weapons—never seem to stick and have been violated constantly.

Will the new approach pave the way for UN peacekeepers and finally break the security impasse that has stalled the Minsk process, or will it lead to an escalation and jeopardize diplomatic talks on the introduction of the UN peacekeeping mission?

Whatever the long-term result, the completion of the ATO unfortunately doesn’t mean the end of war in the near term—the situation remains tense. Shootings and casualties are reported daily. Servicemen, volunteers, and locals are pessimistic the new format will bring meaningful change. For them, the war goes on by its own laws.

Image: Ukrainian servicemen fire an artillery weapon in the direction of positions of the armed forces of the separatist self-proclaimed Donetsk People's Republic near Novoluhanske in Donetsk region, Ukraine January 11, 2018. REUTERS/Maksim Levin