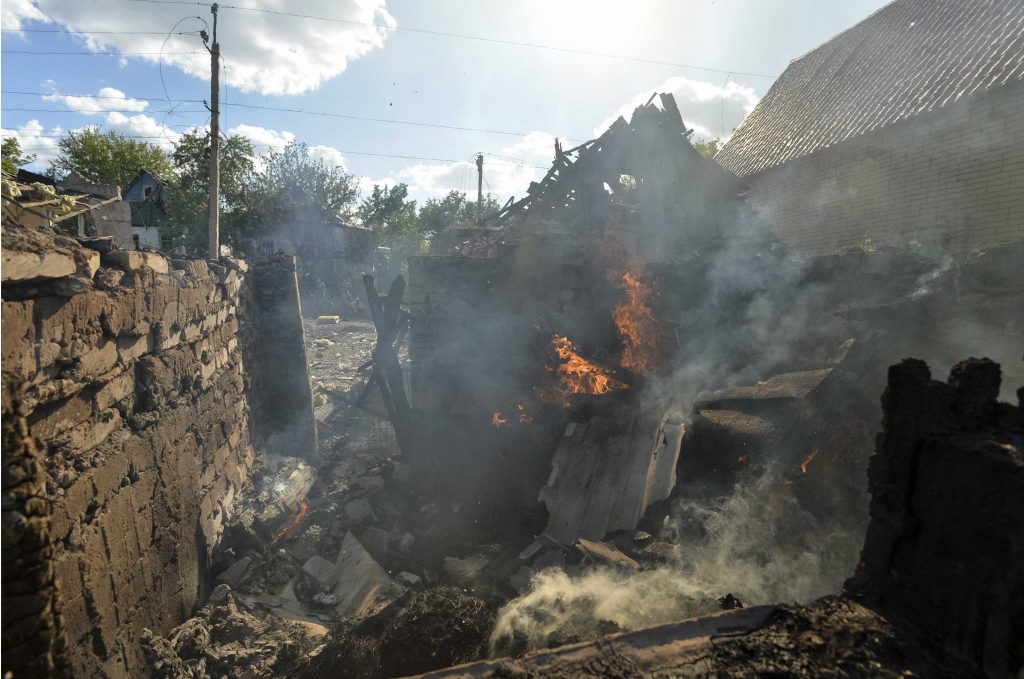 Will the low-intensity war in the Donbas continue its current course in the coming years, or will Moscow turn up the heat there, as it occasionally does?

It’s hard to say. “It all comes down to geopolitics and what Putin wants to do,” said Ihor Kozak, an independent Canadian defense and security expert who visited Ukraine’s frontlines in June, in a recent interview.

Russia is purposefully building up its military capacity and installations, including a railway line along the Russian-Ukrainian border from Zhuravka to Millerovo—new infrastructure that would make possible the quick movement of troops in the region. Renowned Russian military expert Pavel Felgenhauer, who in June 2008 predicted Russia’s August 2008 assault on Georgia, warns that this project and the general buildup of the Russian army could lead to an open Russian invasion into mainland Ukraine.

The aim of such a foray could be to create a land connection between the occupied parts of the Donbas and Crimea that runs along the shores of the Azov Sea. This need may become especially acute if the Russian bridge through the Kerch Strait, which is currently under construction, turns out to be impossible to complete. In such a case, Putin’s annexation of Crimea may be questioned by the Russian public if propping up Crimea becomes too expensive. Such a risk may trigger further Russian military aggression against Ukraine, beginning with some engineered incident that would provide a pretext and secure public approval for further action. With Russian elections slated for next year, Putin could decide he would benefit from a new military stunt to give him an electoral boost. An all-out war would have far-reaching repercussions for European security, including large new refugee flows into the European Union.

In connection with these risks, an intensification of negotiations within the Normandy Format, as one of the few continuing frameworks allowing contact between Ukraine, Germany, France, and Russia, is paramount. On June 14, Secretary of State Rex Tillerson suggested that the United States doesn’t want to be “handcuffed” to the Minsk Agreements and wants to maintain flexibility. Yet such an approach could be wrong, if the United States is consumed by internal political strife in the foreseeable future. The recent rise of Emmanuel Macron in France, and probable confirmation of Angela Merkel as chancellor after Germany’s September elections, make the continuation of Minsk the best available path forward. Recent hawkish statements by both Merkel and Macron toward the Kremlin indicate a high likelihood of unity and steadiness of their positions.

Eastern and Central European EU member states have a great interest in a de-escalation of tensions in eastern Ukraine. Therefore, the EU should signal to the Kremlin that it will introduce tougher sanctions if Russia makes new advances into mainland Ukraine or the situation in the Donbas declines. Brussels should make clear to Moscow its readiness to not only impose, in such a case, more export restrictions, but also to introduce a large-scale embargo on Russia’s voluminous pipeline oil deliveries into the EU. In the meantime, European states both inside and outside of the EU should take more resolute individual actions against select members of the Russian political and economic elite. Often, this can be done by simply more consistently applying EU and national anticorruption legislation to Russian holders of bank accounts and property throughout Europe.

The West will also have to think more seriously about the development of additional security structures for Eastern Europe—especially Moldova, Ukraine, and Georgia. The deep structural hole in post-Soviet international relations is a major reason for the current crisis within Europe’s geopolitical nowhere-land. Without a comprehensive solution to the security problems of Chisinau, Kyiv, and Tbilisi, there can be no lasting stability, sustainable peace, or economic prosperity along the eastern borders of the EU and NATO.

As is well known, however, those two organizations are unlikely to enlarge eastward in the next few years. Therefore, Brussels, Washington, Berlin, Paris, Warsaw, and London should find alternative ways to provide at least some inclusion of Moldova, Georgia, and Ukraine into the European security system. A model for a possible solution exists in the 2010 Agreement on Strategic Partnership and Mutual Assistance between Turkey and Azerbaijan. In Article 2 of this ratified treaty between a NATO member and an Eastern Partnership country, both parties agreed to “swiftly” help each other in case of an armed attack by a third side—support that explicitly includes “the use of military means and capabilities.” NATO could signal to its eastern member states that they are free to make similar commitments toward Ukraine, Moldova, and Georgia, if they wish to do so. Ideally, this could lead to a new multilateral security coalition in Eastern Europe that would follow the example of the abortive Intermarium project proposed by Poland after World War I.

It is in the core national interests of all Western states to send louder, clearer, and bolder signals to both the embattled Central and East European nations and to Moscow.

Andreas Umland is a senior research fellow at the Institute for Euro-Atlantic Cooperation in Kyiv, and general editor of the book series “Soviet and Post-Soviet Politics and Society,” published by ibidem Press in Stuttgart and distributed outside Europe by Columbia University Press.

Image: A house, which was damaged by a recent shelling, is seen in the government-held town of Avdiyivka, Ukraine, May 23, 2017. Picture taken May 23, 2017. REUTERS/Oleksandr Klymenko