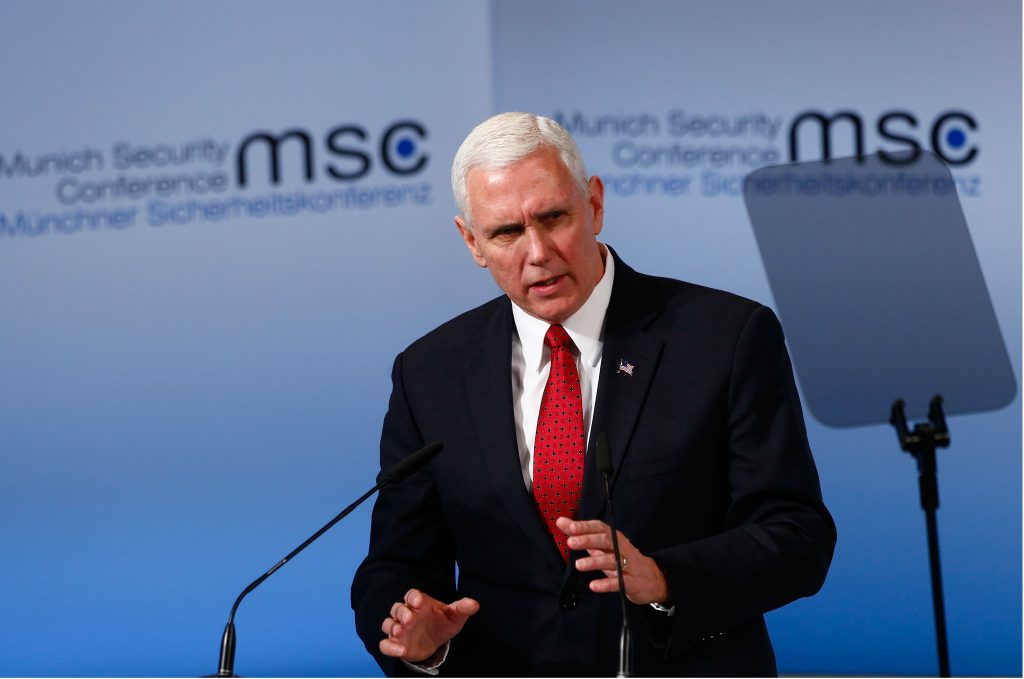 Whatever else occurred at the annual Munich Security Conference on February 17-19, reassurances were not part of it. None of the statements made by high-ranking American officials allayed European fears about President Donald Trump’s administration because, simultaneously, the White House was busy undermining them. Moreover, Vice President Mike Pence’s “unwavering” support of NATO was balanced by the administration’s failure to understand that terrorism is not the most urgent security threat for many states.

That honor belongs to Russian aggression, which continues unabated. And failure to grasp that fact or devote sufficient energy to it merely undermines Western cohesion and security. Moscow may be trying to arrange a major deal with the Trump administration, but it has actually increased its aggression in Europe. There, its goal is to coerce the West into accepting its demands for a new world order in which it must account to nobody, and where great powers rule without limitation—just as Russia rules at home.

This becomes obvious when one considers Russia’s actions over the last six months. Apart from its massive military buildup, Russia has violated the Intermediate-Range Nuclear Forces Treaty with its new missile deployments, intensified its aggression in Ukraine by initiating a process to incorporate the Donbas into Russia, and increased fighting along the truce lines. In Montenegro, Moscow planned a coup involving seizure of the government and assassination of the prime minister. It has interfered with elections in the United States, France, and Germany, launched large information warfare campaigns against the Baltic States, Italy, France, Germany, Finland, and Sweden, supported efforts to undermine peace between Serbia and Kosovo, and blocked the resolution of Bosnia-Herzegovina’s status. Kinetic or combat operations may not be occurring outside of Ukraine, but these are all intentional acts of war against Europe and its values, in support of what Russian Foreign Minister Sergey Lavrov called a post-Western world order.

In that so-called order, Russia brooks no limitations on its sovereignty and aims to do as it pleases, including overthrowing governments and seizing their territory, as in Ukraine and Georgia. Such imperial designs, along with the effort to destroy the transatlantic alliance and the democratic values upon which it is founded clearly illustrate that it is at war with the West—even if it is largely a matter of information warfare. After all, Russian leaders view information warfare as perhaps the most decisive form of contemporary warfare.

Yet at Munich, the Trump administration and its NATO allies failed to grasp the magnitude of the challenges they face. Guaranteeing NATO while prioritizing counterterrorism as Pence did means depriving NATO of the focus it needs to rebuild credible and effective deterrence against Russian threats. Likewise, simultaneously accepting and belittling the Joint Comprehensive Plan of Action with Iran, or threatening NATO members with a reduced US commitment if they do not spend more further questions the US’ credibility, coherence, and ability to perceive its interests. Certainly, Trump’s silence about Ukraine while Russia recently intensified fighting there and now moves to annex the Donbas cannot inspire confidence in his judgment, control of his own administration, or ability to direct a coherent policy.

But Europe’s equivocations that it can leave its defense to Washington or conduct business as usual also fail to suffice. Already, EU officials are thinking about pooling their defenses, and some are reasserting a Europe without or even against America. Indeed, Federica Mogherini, the EU’s foreign policy chief, asked the United States not to interfere in Europe’s business.

In response, the United States must recognize that we are under attack not just from terrorists but from Moscow, and react accordingly. The West must not only generate more effective defense capabilities through increased spending; it must continue to make the case that peace and democracy are under attack, and that the transatlantic alliance is the greatest force today to preserve both. European governments and security organizations must unremittingly educate not only their publics but also Trump and the American people about the necessity of defending their common interests and values.

No real agreement with Moscow is possible as long as it arrogates to itself the right to attack and seize its neighbors’ territory, behave autocratically in world affairs, and demand special treatment and unbridled sovereignty at home. To quote the statesman A. M. Gorchakov, for Russia, “the difficulty lies in knowing where to stop.” But history has already shown that Putin’s autocracy, like its predecessors, can neither stop nor wants to. Therefore we must jointly forge new ways to conduct the old missions of deterrence and reassurance. The alternative is unacceptable.