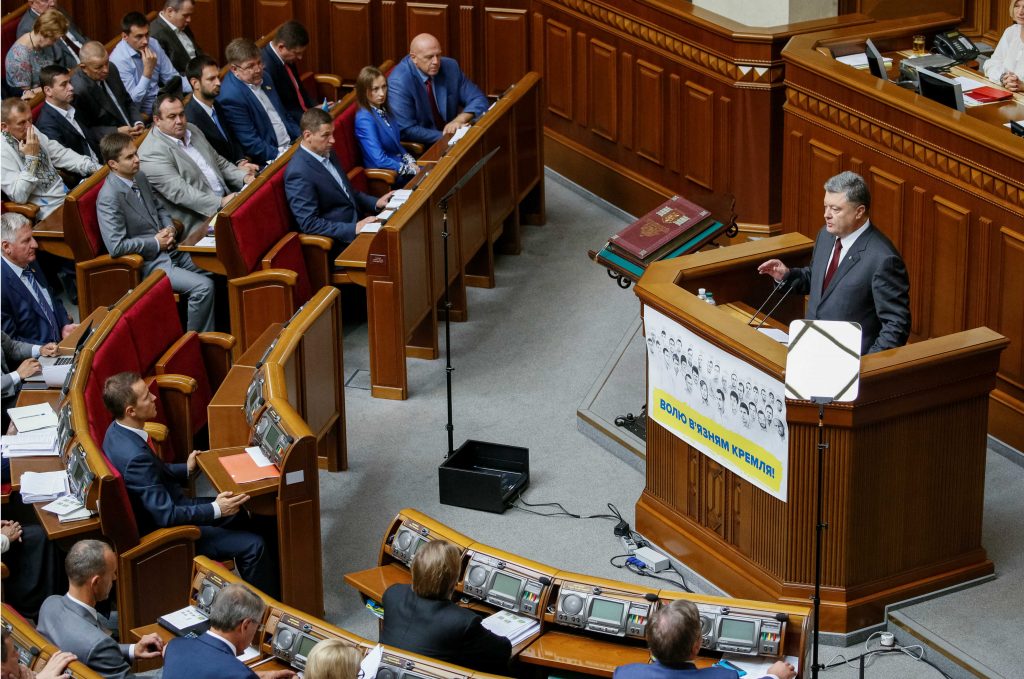 Unsurprisingly Ukrainian President Petro Poroshenko kicked off his annual televised address to parliament on September 6 with words of unity. “At a time when Russia’s aggression against Ukraine is still ongoing, when the military threat from the east is the most difficult strategic challenge, the issue of national unity and political consolidation is a matter of life and death for our country,” Poroshenko said. He repeated this message many times during his speech, trying to convince his listeners to put their differences aside.

Poroshenko’s address can be summed up in three words: peace, security, and reforms. Poroshenko devoted a great deal of attention to reforms in the Ukrainian army and its future plans, and announced that his priority for the next year will be the modernization of the army, including greater professionalism among soldiers. Ukraine spends 3 percent of its GDP on military spending and for purely financial reasons it can’t afford more. He asked MPs to approve a law that would allow Ukraine to reclaim assets that were stolen by former President Viktor Yanukovych and his pals, promising that this money would be used for the army. Importantly Poroshenko emphasized the heroism and dedication of civil society and stated that its continued support is a key condition for building a strong and independent army. “Our strategic goal is NATO membership,” he said.

According to Poroshenko, Ukraine can win only by building a strong army and maximizing its diplomatic efforts. Poroshenko reaffirmed Ukraine’s commitment to the principles of international law and good will in implementing the Minsk agreement. While he expressed gratitude for the international support his country has received, he was more restrained and less enthusiastic than the previous year. While talking about foreign policy, he outlined the changing political landscape in Europe. While noting the rise of right-wing and Eurosceptic parties in Europe and the growing interference of Russia in the domestic affairs of other countries, he made the case for self reliance. “Close cooperation with foreign partners remains important to us, but we should learn to rely on ourselves.” While he didn’t address a lack of progress explicitly (both the latest IMF tranche and visa-free travel within the EU have been delayed, for example), the way he spoke about international affairs made his listeners understand that not everything is smooth in the international environment and it has an impact on Ukraine’s relationship with the EU and the United States.

There were several strong points in his speech. Poroshenko took a much harder and decisive stance on Crimea. Last year he merely mentioned Russia’s occupation of Crimea along with Russian aggression in the east. This year Poroshenko was much more outspoken: “Crimea was Ukraine, Crimea is Ukraine, and Crimea will remain Ukraine.” The changes in the president’s more forceful rhetoric weren’t coincidental; it illustrates how Ukraine is becoming more proactive on the Crimean issue and will not accept the annexation of its territory. As Poroshenko said, “We will not trade territories for peace,” which applies to both Crimea and the Donbas. Parliament will not vote again on the controversial amendments to the Constitution that would give greater autonomy to the separatist republics in eastern Ukraine as long as there are no favorable conditions for consideration, he said.

On the economy, Poroshenko praised Ukraine’s IT boom and recognized its successful start-ups. Poroshenko didn’t forget to mention the importance of decentralization and the ongoing fight against corruption. He also didn’t miss a chance to reassure his countrymen that any problems associated with the launch of the e-declaration system were merely technical and that he fully supports this system.

One of the most interesting issues raised by Poroshenko was the establishment of a national Ukrainian Orthodox Church. In June, parliament asked the Ecumenical Patriarch of Constantinople to recognize and to help establish a fully independent Orthodox church in Ukraine—a move that Poroshenko praised in his address. While Poroshenko has spoken on this issue before, it was the first time he mentioned the possibility of a unified church during such a special occasion. His statement, which garnered the support of a number of prominent Ukrainians, signifies a new front in his activities. Establishing a national church is not a purely religious issue; it concerns advocacy of religious institutions and skillful internal diplomacy, as well as questions of national security and limiting Moscow’s influence over Ukrainians through the Moscow Patriarchate.

Apart from outlining major international and domestic issues, Poroshenko aimed to awaken a feeling of responsibility. “There are moments when we must forget about divisions between us, look above the political barriers and remember that first and foremost we all are Ukrainians,” he said. He sounded convincing, but whether he managed to convince the opposition led by former Prime Minister Yulia Tymoshenko, we will only know in the months to come.

Kateryna Kruk is a Ukrainian activist and journalist. In 2014 the Atlantic Council awarded her its Freedom Award for her work communicating the Euromaidan Revolution to the world via Twitter. Follow her on twitter @Kateryna_Kruk