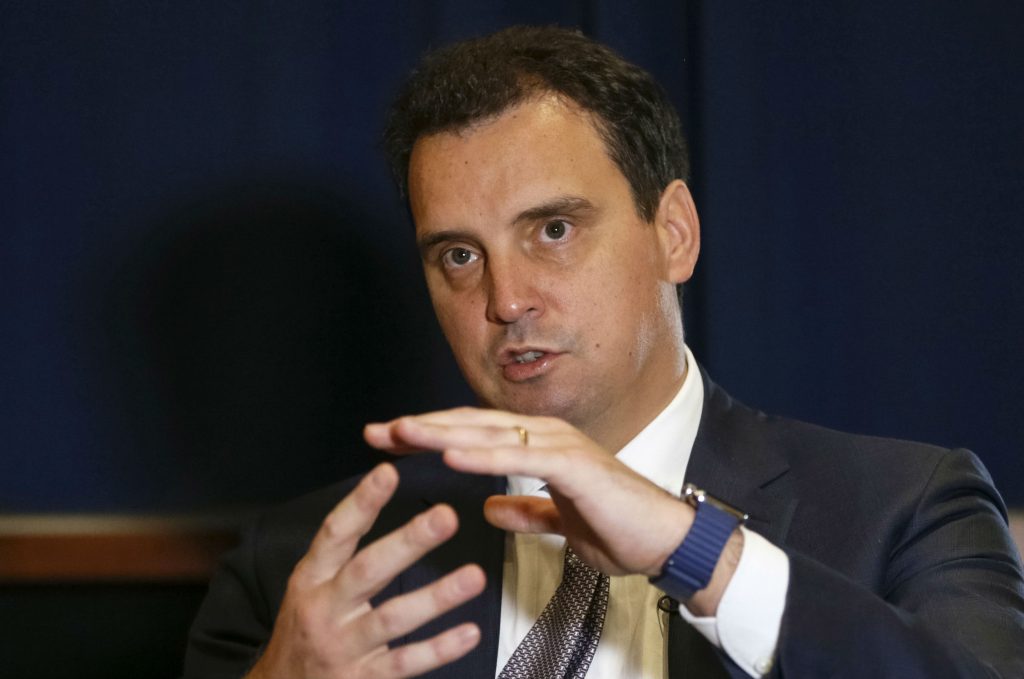 The resignation of Aivaras Abromavicius from the position of Minister of Economic Development and Trade is another nail in the coffin for the hopes for serious reform in Ukraine. In resigning, he follows in the footsteps of his predecessor Pavlo Sheremeta, who was also unwilling to serve in a government that was more interested in personal gain than true reform.

A smear campaign has once again been started by political factions for whom the truth is inconvenient. “The Minister was incompetent, the Minister moved too slowly, the Minister was inexperienced, the Minister had ulterior motives,” etc. The chorus is both familiar and pathetic. It hails from the best Soviet practice of disinformation, which is still well-practiced in Putin’s Russia and too often echoed in Ukraine.

It cannot go unnoticed that one by one, Ukraine’s finest reformers are being pushed to resign from the cabinet. These include Oleksiy Pavlenko, Minister of Agriculture; Andrei Pivovarsky, Minister of Infrastructure; and Alexander Kvitashvili, Minister of Health. All have resigned but have since retracted under pressure. Rumor even has it that Serhiy Kvit, Minister of Education, is under threat.

These ministers, together with Finance Minister Natalie Jaresko, came into the government with the goal of achieving breakthrough reforms under the impetus provided by the Euromaidan against the kleptocracy of former President Viktor Yanukovych’s regime. However, they quickly found themselves surrounded by the people of the past: the bureaucrats, the politicians, and the oligarchs who have for too long formed a triangle of corruption. For these groups, reform is undesirable. This repeats situations in Ukraine’s history when, for example, a reformer like Viktor Pynzenyk was repeatedly pushed out of government.

When Sheremeta was appointed to the cabinet in 2014, we were invited to be part of a group acting as economic advisors to the Ministry of Economic Development and Trade. Joined by a number of other economic experts with international experience in reform, we attempted to provide input. Working with Sheremeta and then Abromavicius, we found in both a sincere desire to implement reforms which would lift the economy from the bog of post-Soviet decline.

These individuals represented the spirit of the Euromaidan and were willing to make personal sacrifices to serve their country. They had excellent training and understood what steps would be required to fulfil the dream of bringing Ukraine into a European style of governance and economy. We observed that they were joined by a number of young and energetic volunteers from civil society who also wanted to make a difference.

Unfortunately, as time progressed, it became more and more obvious that there was little political will to support true reform within the top leadership and ruling cabal. We observed the level of frustration rising as meaningful reform proposals were sidelined due to corruption and greed. It became clear that only those reforms which were deemed absolutely necessary to meet the requirements of international funding sources, mainly the International Monetary Fund (IMF), were reluctantly adopted. Reform, as in all previous regimes, was cloaked with fine councils and agencies, which served only to mislead outside observers.

As an example, the Rada Anticorruption Committee’s head, reformist Tetiana Chornovil, resigned in frustration soon after her appointment. The parliamentary coalition agreement developed on the basis of the reform plan Strategy 2020 was then quickly emasculated by a variety of special interests represented in the Rada.

And once again, the use of obfuscation in place of meaningful action is apparent. The allegations of corruption which have been surfacing throughout the year involving key political figures such as Mykola Martynenko, Ihor Kononenko, Borys Lyozkhin, and Arsen Avakov have not been pursued by Prosecutor General Viktor Shokin. The explanation is that these matters are awaiting the investigation of the newly created National Anti-Corruption Bureau. While this body may prove itself capable of the task, it is likely to simply be overwhelmed by the controlling powers, for whom prosecution of their inner circle of political allies is undesirable. In any event, this deferral provides a temporary cover that permits inaction. In the meantime, the campaign of discrediting corruption fighters such as Oblast Governor Mikheil Saakashvili, Rada Deputy Sergii Leshchenko, or former head of the SBU Valentyn Nalyvaichenko proceeds at full pace.

The façade of reform continues with the constant refrain that progress is gradually being made and patience is needed. But the well-established axiom guiding successful reforms undertaken in countries such as Georgia, Lithuania, Poland, and Slovakia is that reforms need to be swift and comprehensive if they are to be effective. The patience of Western ambassadors and the managing director of the IMF has worn out, as indicated by their public statements. Responsibility for this state of affairs can only lie with the President and prime minister. Only a totally new government with the political will to implement real reforms offers any hope for a change for the better.

Basil A. Kalymon is Professor Emeritus at Ivey Business School, University of Western Ontario, Canada.  Oleh Havrylyshyn is a visiting scholar in the Munk School of Global Affairs/CERES at the University of Toronto.