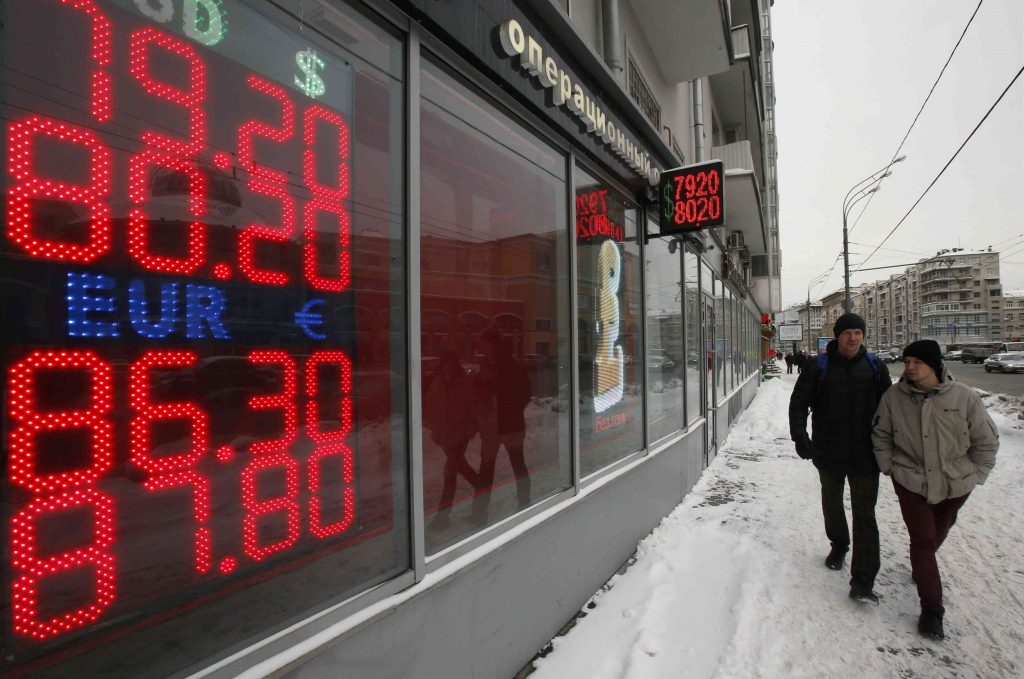 At present the price of Brent crude oil is $28 per barrel, while it was $114 per barrel in June 2014. This price fall by three-quarters is of great importance for the Russian economy and its policy toward Ukraine. The only rational option for the Kremlin is to wind down the conflict with Ukraine.

Russia is a petrostate. When the oil price was high, oil and gas accounted for two-thirds of Russia’s exports, half of its state revenues, and one-fifth of its GDP. At this oil price, Russia’s exports fall by half to $260 billion. State finances do not suffer that much because of the parallel ruble devaluation, but the standard of living in Russia plunges with the ruble, which has fallen from 33 rubles per dollar in June 2014 to 84 rubles per dollar at present. Russia’s GDP measured in dollars has shrunk from $2.1 trillion in early 2014 to less than $1 trillion now. Russia has declined from the sixth largest economy in the world to barely the fifteenth after Mexico.

Low oil prices are likely to persist for a decade. Since the end of the nineteenth century, the energy sector has been characterized by long supercycles lasting for about a quarter of a century. The oil price was low from 1981 to the early 2000s, while it was high from 2003 to 2014. Since the 1880s, low energy prices have persisted for eleven years on average. The reason for this pattern is that most energy investments, both in production and in consumption, are long-term. Therefore the price of oil isn’t likely to rise much in the near future unless a major war erupts.

Oil and gas wealth has a devastating effect on societies, because a small elite usually monopolizes these fortunes. To be able to do so they favor dictatorship. All the seventeen states in the world with the largest oil rents as a share of GDP are authoritarian states. The eighteenth is Norway, which was a wealthy and strong democracy before it found oil. During the last period of low oil prices, the Soviet bloc and the Soviet Union broke up, and about half of its successor states became democracies.

All this is good news for Ukraine. In 2013, Ukraine imported natural gas and oil for $18.6 billion or 10 percent of its GDP. At current energy prices and consumption, Ukraine will only spend about one quarter of that amount, barely $5 billion, on oil and gas imports in 2016. With less money being made in the energy sector, Ukraine may finally manage to clean up its pervasive corruption. This will mean a major gain in welfare.

The Russian regime, on the contrary, is being badly hurt by the low energy prices. So far, the Kremlin has chosen to reduce the standard of living of its population, while maintaining defense and security expenditures at a high level. Last year Russia’s real wages fell by 10 percent. This anti-social policy is hardly sustainable. Russia’s long-distance truckers have been protesting since November 11, and pensioners have staged protests against cuts in local subsidies, but they will have to be cut much more. As Russia’s GDP falls and social protests grow, the Kremlin will have to cut its defense expenditures.

Under the circumstances, the Kremlin is unlikely to choose to continue its costly and rather meaningless war with Ukraine. Since September 1, violence in the Donbas has been reduced. Russia’s military action in Syria appears a diversionary maneuver to make Russians forget about the failed war in Ukraine. Russia’s appointment of Boris Gryzlov, who settled the Orange Revolution, appears a conciliatory gesture to Ukraine.

Objectively, Russia needs to get out of the Donbas. It was the Donbas and not Crimea that convinced the United States and the European Union to impose severe financial sanctions on Russia, which are now together with the low oil price strangling the Russian economy. Russia is economically weaker than it has been for at least a decade. However obstinate President Putin is, even he might understand that it would be madness not to withdraw from the Donbas now.

Anders Åslund is a senior fellow at the Atlantic Council and author of “Ukraine: What Went Wrong and How to Fix It.” This article was originally published in Russian by Novoye Vremya.

Image: Men walk past a board showing currency exchange rates of the U.S. dollar and euro against the rouble in Moscow, Russia, January 20, 2015. The Russian rouble weakened to a new record low against the dollar on Wednesday as the mood on global markets was torrid and oil prices slumped. Credit: REUTERS/Sergei Karpukhin