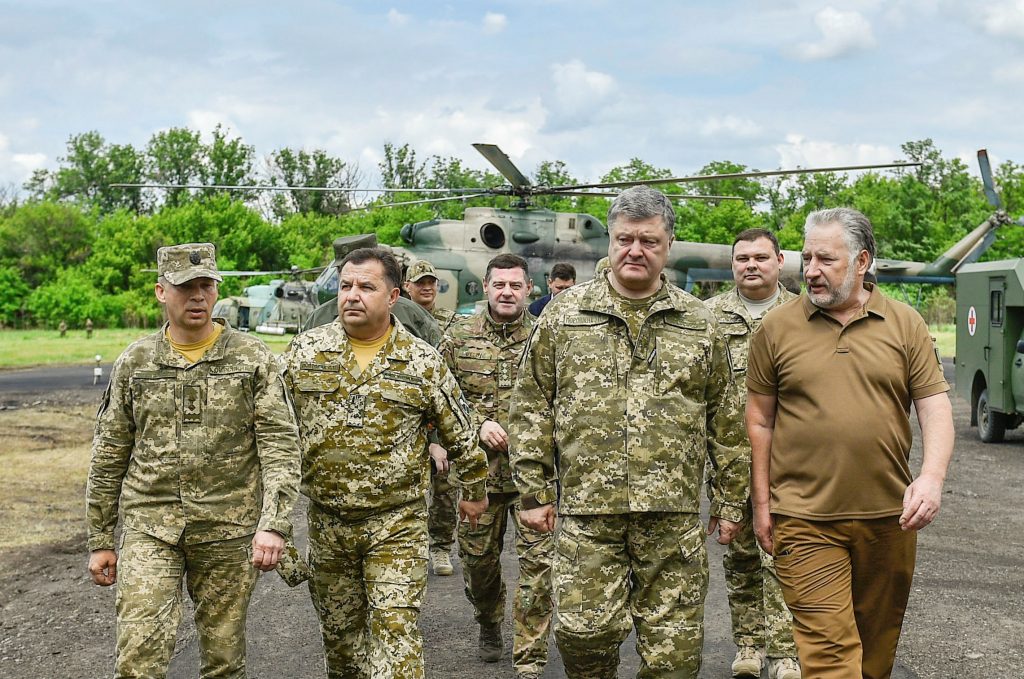 Since Russia’s military aggression began in 2014, I have been asking myself what Ukraine must do to win.

There is no simple answer, but we cannot defeat Ukraine’s external enemy until we have overcome the enemy within, which is corruption. And Ukraine is losing this internal battle.

I am convinced that a zero-tolerance approach at all levels is the only way to defeat corruption. Zero means no exceptions, and the fight needs to begin at the top.

Over the past three years as CEO of Naftogaz, I have encountered levels of corruption that I could not have previously imagined.

Zero tolerance to corruption has become a pragmatic survival strategy for Naftogaz since I took over in April 2014. In three years, we have turned the company around from sucking up twenty-five percent of the state budget ($5.6 billion net loss) in 2014 to contributing 10 percent in revenue ($0.8 billion net profits) in 2016. We did this by acting in the interests of the company, not third parties, and this has benefited the state and all Ukrainians.

Why is corruption such a major problem in Ukraine? The core of the problem lies in the widespread societal tolerance of everyday corrupt practices. One vivid example is corruption in healthcare. Ukraine’s constitution guarantees free healthcare, but in practice, it is normal to “reward” doctors with illicit payments. Is this corruption? Certainly. Yet the vast majority of Ukrainians have made such payments.

Too many view corruption as an inevitable evil and, in many cases, a practical solution. This tolerance of corruption is the key difference between Ukraine and most Western nations.

Even countries like Norway are not immune. Four officials from Norway’s biggest fertilizer manufacturer were recently caught bribing foreign governments. However, in Norway, corrupt officials and executives face the prospect of prosecution and usually end up in prison. In Ukraine, the luckiest make it to the parliament where they enjoy immunity from prosecution. The less fortunate become deputy ministers, while in a worst-case scenario they may have to flee the country. This is the essence of indulgence—people involved in corruption are confident that it will not be a disaster if they are exposed.

From the company’s founding in 1998, Naftogaz managers existed in two parallel realities: they had to ensure Ukraine’s energy security and resist Gazprom’s efforts to expand its influence in Ukraine, but at the same time they focused on earning money for the regime while preventing its domestic opponents from benefitting from the energy sector.

The most telltale examples of corruption in which Naftogaz was involved were sham purchases. This could refer to anything from undelivered turbine blades to the never rendered mapping and inspection services for trunk gas pipelines. These corrupt practices highlight the extent of the problem because they typically involved many people. The conspiracy would necessarily require the participation of everyone from senior management to staff members who would provide the signatures to indicate sham deliveries. This all took place under the watchful gaze of legions of controllers, inspectors, and law enforcement agents.

Ukraine’s state-owned enterprises (SOEs) like Naftogaz do not exist in a void. A complex system of government controls has theoretically been in place since 1991. Any decision must go through a number of relevant ministries and the Cabinet of Ministers itself. Reports on the implementation of approved plans must go to various ministries and government agencies. State auditors and inspectors carry out performance control functions. Permanent advisers to general managers are appointed from the State Security Service.

According to my calculations, at least 30 percent of the staff at Naftogaz headquarters engage exclusively with various industry controlling bodies. The remaining 70 percent have a lesser degree of interaction, but are also subject to regulatory control. Nevertheless, this system of supervision has clearly failed to curb corruption.

If we take an unbiased look at the system of controls governing the management of SOEs, it is clear that corruption is still flourishing. This costs the Ukrainian state billions of dollars annually.

Beyond this direct financial cost, corruption also degrades state-run companies, which make up more than 3,500 enterprises, compared to an average of at most several dozen in OECD countries. Corruption in this sector also means that the brightest and most capable candidates leave the system and are typically replaced by loyal but limited appointees.

These appointees do not possess the professional skills to do their jobs well. They resort to bluff and imitation. The results of this deterioration are evident in our interaction with the government. If a senior official orders a study of a Naftogaz operation, this person will hardly receive an accurate picture from people whose formal duty it is to perform such an analysis. Instead, he will get a longwinded but ultimately useless report full of groundless assumptions.

As a result, senior government officials have to make many key decisions related to SOE operations blind or rely on opinions of “trusted” outsiders.

My own work at Naftogaz is full of such experiences. With the advent of each new government (there have been three since I became Naftogaz CEO in 2014), former company officials have offered me their services in explaining the company’s core gas balance and financial planning documents to the government “in the right way.” These people usually tell me they received an informal request from various ministries or the Cabinet of Ministers to help interpret these key documents. These requests for help actually mean, “Show us where the management is stealing.”

The proposal I normally get is simple: the “expert” offers to deliver a favorable report to senior government officials in exchange for certain favors. When I refuse, they threaten to tell the authorities that Naftogaz is stealing through gas imports from the EU. It may sound ridiculous, but these accusations are still the first thing I hear whenever I come to discuss our key documents with the government.

Thus, we end up in a situation where the government cannot rely on its own agencies because of their insufficient expertise, and third parties who do possess the knowledge are unlikely to act in the interests of the state because they pursue their own interests.

Everyone is well aware that elements of the SOE control system have become extortion tools. At a meeting to select projects to be funded by a widely publicized Chinese loan, one deputy energy minister suggested that if I wanted to secure funding, at least $1 billion of the loan should be allocated to coal miners. When I replied that Naftogaz is not involved in the coal mining industry, he answered that in this case no other project would ever be approved.

Nevertheless, I refused. Had Naftogaz allowed third parties to use part of the loan, the funding would likely share the fate of a similar Chinese loan given to the ill-fated Melnikov mine, where $85 million vanished.

This incident reminds me of the famous joke: what do you get if you add a pound of muck to a pound of jam? Two pounds of muck. The same rule applies to state-owned enterprises. What will happen if you allow high-level corruption with indulgence from senior officials? Soon enough, the entire structure will be corrupt, from billion dollar purchases to the distribution of trade union holiday package tours. This is not mere theory—it is the rule in Ukraine, as we have seen on countless occasions.

Anyone seeking inspiration for the fight against Ukraine’s culture of corruption should look at the recent example of procurement reform. Many prominent “experts” were critical of former Economy Minister Aivaras Abromavičius and his efforts to reform this notoriously corrupt sector. They accused him of tearing down the old tried and tested system without having a replacement ready. ProZorro, the new e-procurement system, they claimed, was unproven. Now the system is widely acclaimed as a real breakthrough, has received a number of global awards, and other countries want to copy us.

Was this really such a risky policy? The old system was generating so many losses for the state that its complete dismantling could hardly make matters worse. Imagine if you decide to clean out your fridge and throw away some rotten meat. At the very least, you will have created space, removed the odor, and avoided further cases of food poisoning.

This logic is appropriate for the governance of Ukraine’s state-run companies. Replacing the current system of state controls with standard Western approaches will not hurt. In most cases, it will lead to rapid improvements.

Naftogaz’s turnaround and the first results of gas market reform demonstrate Ukraine’s possibilities for rapid growth. The role of Naftogaz gradually diminishes from an all-encompassing (and loss making) monopoly to a regular (and profit making) market participant. Major segments of the gas market were deregulated and opened up for competition. Ukraine’s gas market has become attractive for foreign traders, suppliers, and investors. And the country is no longer dependent on Russia for its gas supplies.

Corruption will remain invincible without a new judicial system, fully reformed law enforcement agencies, and a number of other rule of law reforms in Ukraine. However, reform within state-run companies may catalyze broader reform throughout governmental institutions.

We need to continue to encourage a new generation of people uncontaminated by corrupt practices to enter the public sector, as we did in 2014. This was a unique moment in the history of independent Ukraine when qualifications trumped political loyalty and a whole cadre of professionals became drivers of positive change. This 2014 intake has been responsible for Ukraine’s greatest reform achievements of the past three years.

But their achievements are far from irreversible. Attempts to turn back the clock continue. This is why it is vital to increase momentum. Unless we adopt a sense of urgency in our reform efforts, we will never succeed in catching up with our Western neighbors or escaping from the embrace of the bear to the east.

Many people see Russian President Vladimir Putin as a good tactician but bad strategist. I am not so sure. Ukraine hasn’t managed to outsmart Putin in either area. We must become better strategists in order to win the war. A truly strategic mind can introduce zero tolerance toward corruption while in power. The temptation to halt reforms and return to past models with their promise of largesse is often too strong to ignore. This makes it an extremely demanding path to follow. Nevertheless, it is the only winning strategy available to Ukraine.

Andriy Kobolyev is the CEO of Naftogaz Ukraine. This article was originally published by Zerkalo Nedeli.