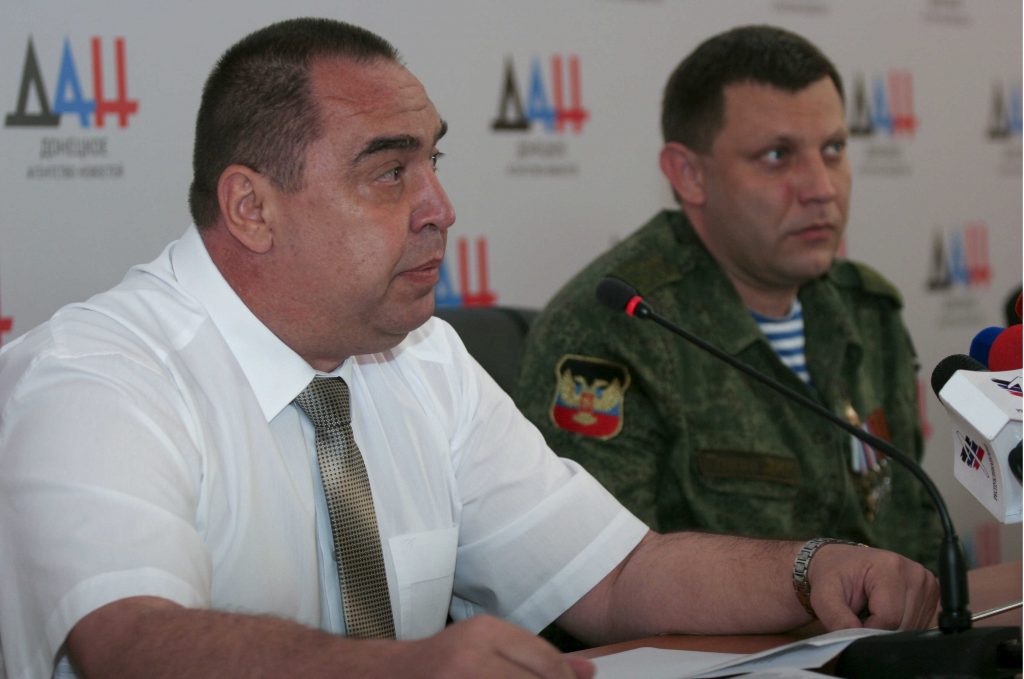 The Donetsk People’s Republic (DPR) and Luhansk People’s Republic (LPR) are self-proclaimed entities that emerged in spring 2014 in eastern Ukraine thanks to massive Russian support. Ukraine’s attempts to retake them in spring and summer 2014 were stopped by a full-scale Russian military offensive that August. This more or less fixed the demarcation line between Ukrainian government-controlled territory and the pro-Russian separatist-controlled area under the Minsk agreements. Since then, the so-called DPR and LPR have had their own political institutions and economies dependent on Russian supplies and currency.

Based on regular monitoring of open sources, we analyzed some of the key trends in these secessionist territories last year.

Former leaders assassinated one by one

One of the major trends of 2016 and 2017 has been the gradual assassination of former leaders or key figures in both the so-called Donetsk and Luhansk People’s Republics. Some of them were killed in terrorist attacks on separatist-controlled territories, while others died under mysterious circumstances in Russia.

Mikhail Tolstykh (“Givi”), one of the key DPR war chiefs, was killed on February 8 in his office near Donetsk. His close companion Arseniy Pavlov ( “Motorola”) was killed in Donetsk near his apartment last October. Oleg Anashchenko, a key LPR policeman, died in a car explosion on February 4. Valeriy Bolotov, the first head of the LPR, died in Moscow on January 27; he was allegedly poisoned. In September, Oleg Zhilin, the former head of the DPR military group Oplot, was killed near Moscow.

The separatists blame Ukraine for these assassinations, but it is unlikely that Ukraine’s forces have sufficient capacity to perform an attack on territory they don’t control and hide all traces afterwards. The killings are most likely a result of attempts of DPR/LPR administrators (and probably their Russian supervisors) to remove the most uncontrolled and unreliable leaders and war chiefs. Removing these troublemakers should open the door to installing figures closer to the former leadership of Yanukovych’s Party of the Regions or the Kremlin itself.

In DPR in 2016, the authoritarian political regime led by Alexander Zakharchenko aimed to strengthen its power, and Zakharchenko’s political opponents have been gradually removed from the political scene. These include the following people and political forces:

1. Alexander Khodakovskyi is a field commander of separatist battalions and the founder of the Vostok battalion. In September 2016, when he returned to Donetsk from Crimea, Khodakovskyi increased his oppositional activities. As a result, Zakharchenko’s people denied him the possibility of becoming a part of DPR’s political leadership; he was dismissed from the position of DPR Security Council Secretary and his supporters in the People’s Council were forced to resign.

2. Andrei Purgin is the founder of the Donetsk Republic, a separatist organization. The separatist project “Russia’s South,” headed by him and supported by top Russian politician Viacheslav Voldin, aimed to consolidate divided radical separatist groups. But Purgin was recently removed from the political process and gets little attention from the DPR media.

4. Supporters of the Novorossia political project, aimed at extending pro-Russian territories through eastern and southern Ukraine, decisively lost influence in 2016. Some members were imprisoned; others had to flee. The political wing of this group represented by Pavel Gubarev’s team lost its ability to affect DPR politics and is rarely represented in the media.

Today, Zakharchenko’s group can be divided into onto several sub-groups. They are controlled by a handful of key players:

1. Alexander Timofeev and Konstantin Kuleshov coordinate the activities of DPR’s Ministry of Income and Tax, which has focused on forced takeovers of commodity markets, racketeering, fiscal policy, and smuggling revenues. Alexander Timofeev is the Minister of Income and Tax and is reportedly close to Vladislav Surkov, an aide to Russian President Vladimir Putin and a key coordinator for the secessionist republics in the Russian government.

2. Sergey Zavdoveev is a field commander whose group coordinates the actions of the battalion Legion; it conducts forced takeovers of commodity markets under the protection of the People’s Council. Zavdoveev is also the head of Donbass Oplot, a separatist organization. Zakharchenko uses Zavdoveev to oppose Timofeev.

3. The military, security, and intelligence agencies known as siloviki have included Arsen Pavlov, Mikhail Tolstykh, Ivan Kondratov, and Andrey Borisov. The siloviki have lost a major part of their influence after Pavlov and Tolstykh were killed in terrorist attacks, and Kondratov resigned as the head of the Republican Guard, a military group within the DPR. Currently, this wing of Zakharchenko’s forces is only represented by a couple of battalions.

The major clans within Zakharchenko’s group are constantly struggling for control over different areas of DPR life. This is the reason Zakharchenko is developing Donbass Oplot, the organization headed by Zavdoveev. It will likely rely upon several people:

1. Denis Pushilin  is  the head of the People’s Council, the parliament, of the so-called Donetsk People’s Republic. This group is important and is constantly trying to increase its influence. Local sources regularly report on tensions between Pushilin and Zakharchenko, the head of the DPR’s “government” and “state,” mostly regarding the Minsk agreements and the DPR’s future development. Because of these tensions, Pushilin’s position may be at risk.

2. 2016 also saw the emergence of new centers of influence in DPR leadership; among these are Dmitriy Trapeznikov, DPR Deputy Prime Minister; Alexey Granovskiy, Industry and Trade Minister; and Maksim Leshchenko, head of DPR administration. Currently, Leshchenko’s position is weakening, while Trapeznikov and Granovskyi have become more influential. Granovskiy has found support with Russian backers, which has allowed him to create a new center of influence. Since then, he has often been viewed as a possible replacement for Zakharchenko, though he is not the only one.

Unlike in the DPR, a strong power vertical was established in the self-proclaimed Luhansk People’s Republic in 2015. This process took place immediately after the elimination of key independent field commanders who supported the Novorossia project. The LPR, therefore, has only a few important political figures:

1. Throughout 2016, self-proclaimed LPR leader Igor Plotnitskiy attacked opposition groups. He claimed there was an insurrection and plot against him after an attempt on his life in August 2016, and used this opportunity to persecute his opponents. As a result, Gennadiy Tsypkalov was killed in the detention facility run by the LPR’s prosecutor general’s office, and Alexey Kariakin fled to Russia. Numerous other officials suspected of aiding the group close to Tsypkanov and Kariakin have been detained or killed.

2. When Kariakin arrived safely in Russia, he continued his political activities related to LPR politics and has been reportedly connected to Valeriy Bolotov, a former LPR head. Bolotov created a new movement called Yedinienie (Unity), which wants to revive the Novorossia project, supports separatism in eastern Ukraine, and tries to discredit Plotnitskiy’s political activities. He died in late January in Moscow under mysterious circumstances.

3. Leonid Pasechnik and Vladimir Payo exert important influence. Their group coordinates LPR’s Ministry for State Security: Pasechnik is in charge of this institution, while Payo—who officially heads the counter-intelligence unit there—supervises separatists’ affairs from Russia’s Federal Security Service. Both are openly competing with Plotnitskiy’s group. Clashes between the two are focused on control over coal and drug smuggling, and arms supplies. A coup d’état narrative seems to be developing in the rivalry between these two groups.

4. Meanwhile, opposition movements like LPR’s communist party have been losing influence since 2015.

This past year saw an intensification in the conflict between DPR’s Zakharchenko and LPR’s Plotnitskiy, caused by the possibility of the two republics merging into a united quasi-state. Because of this conflict, Plotnitskiy has been strengthening customs control at the border with the DPR since the beginning of 2017, restricting the flow of goods from the DPR and limiting their access to the LPR’s territory.

Various groups are vying for power in eastern Ukraine’s secessionist republics, and these power struggles are far from democratic, with unreliable opponents gradually marginalized or murdered.

Oleksandr Nykonorov is a journalist at Depo.ua and an internally displaced person from Luhansk who now lives in Kyiv. He has studied separatism in Ukraine for years. Volodymyr Yermolenko is expert at Internews Ukraine and coordinator of the UkraineWorld Group, a Ukraine-focused networking initiative.