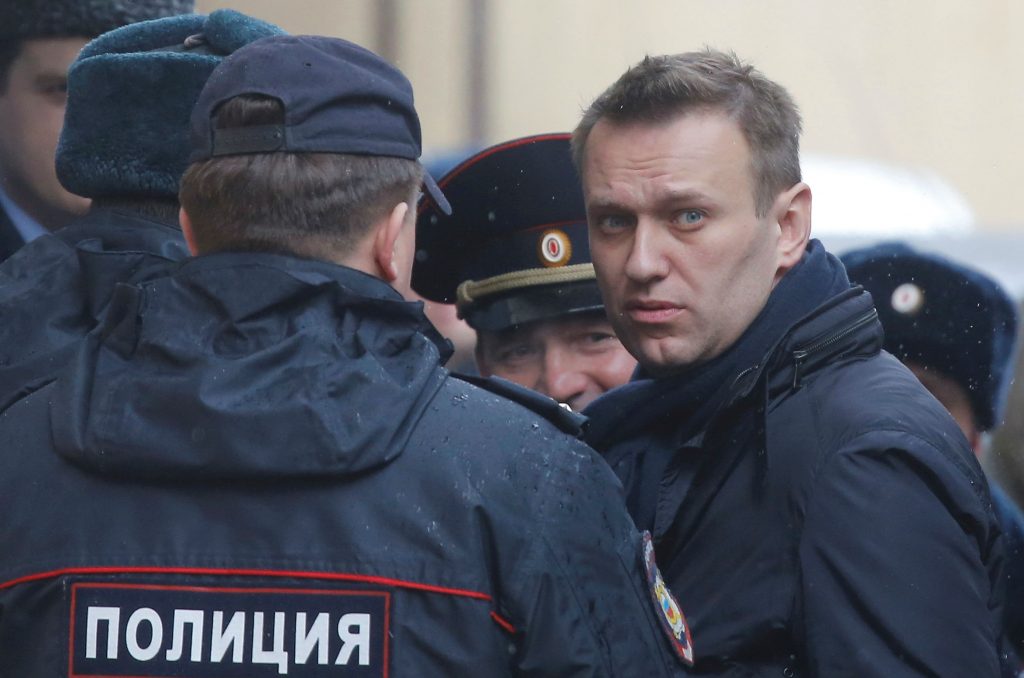 Russian opposition leader Alexei Navalny is escorted upon his arrival for a hearing after being detained at the protest against corruption and demanding the resignation of Prime Minister Dmitry Medvedev, at the Tverskoi court in Moscow, Russia March 27, 2017. REUTERS/Maxim Shemetov

The US Congress has approved $100 million to counter “Russian influence and aggression” and support civil society organizations in Europe and Eurasia. According to the legislation, the funding will be used to “support democracy programs in the Russian Federation, including to promote internet freedom, and shall also be made available to support the democracy and rule of law strategy” under State Department policies.

Last year, the US Congress ruled that assistance to Ukraine should not be used to finance the Azov battalion because of its alleged links to a neo-Nazi group. The US government should apply that same level of scrutiny to Russian groups and political parties to determine if they are suitable recipients of US taxpayers’ money.

In order to accomplish this, a twofold criteria should be used. First, it should be determined that the groups support democracy, free elections, and independent media in Russia. Second, they should oppose Russia’s annexation of Crimea. While the first criteria should be uncontroversial, the second is anything but. The majority of Russian opposition groups and parties support its annexation and back a Russian Union of Russia, Ukraine, Belarus, and Kazakhstan.

The United States, Canada, Japan, and the Europe Union imposed sanctions against Russia in response to Russia’s 2014 land grab in Crimea and military aggression in eastern Ukraine. Providing US funding to groups that back Russian imperialism against Ukraine would be in direct contradiction of the sanctions and the Minsk peace accords.

Historically, it is not unusual for political groups and parties to back democracy efforts in their own countries while simultaneously supporting imperialism and racism abroad. Oliver Cromwell is remembered by the British for his opposition to monarchist absolutism and support for parliamentarism, and by the Irish for a brutal imperial conquest. John Stuart Mill defended liberal democracy at home and the British Empire abroad. In the 1930s, Austria’s social democratic party supported the Anschluss with Nazi Germany.

The majority of Russian opposition groups and parties subscribe to Alexander Solzhenitsyn’s call for a Russian Union of the eastern Slavs and Kazakhstan in his 1990 text, Rebuilding Russia. Although Russian democrats and patriots agree with Solzhenitsyn on the need to ditch the larger empire, they nevertheless agree with Putin in two areas.

The first is that the Russian-speaking regions of eastern and southern Ukraine were wrongly included inside Ukraine. On the eve of the December 1991 Ukrainian referendum on independence, Solzhenitsyn called for each Ukrainian region to decide its own future. Putin made similar claims in his speech to the NATO-Russia Council at the Bucharest NATO summit in 2008.

The second point of agreement is that Ukrainians and Russians are the same people. In 2012, during the peak of Russian street protests by liberals and nationalists, Alexei Navalny, one of the most prominent leaders of the Russian opposition, said of Ukrainians and Russians, “In fact, we’re one nation,” and called for maximum integration of Russia, Ukraine, and Belarus.

The majority of Russians define “Russian” (Russkii) as ethnic Russian when referring to the Russians living in the Russian Federation and the three eastern Slavs when talking about the so-called “Near Abroad.” Solzhenitsyn and contemporary democrats are essentially imperialists, denying that Ukrainians and Kazakhs, for example, are a separate people.

The imperial understanding of “Russian” refers to a shared past that goes as far back as the medieval Kyivan Rus state and predetermines a shared future. If Russians and Ukrainians are the same people, then it follows that their destiny is to remain close “fraternal brothers.”

Since the end of the Soviet Union, Russia’s politicians have laid territorial claims to Crimea and Sevastopol, as reflected in State Duma resolutions in the 1990s and Moscow Mayor Yuriy Luzhkov’s brazen interference in Crimea. In the 1990s, Russia routinely used energy and other crude forms of economic pressure against Ukraine.

Russians of all political persuasions find it impossible to understand the strength of Ukrainian patriotism because they see Ukraine as an artificial state propped up by the West. But Russian nationalists also blame Putin for the collapse of the Novorossiya project because he did not follow Crimea’s annexation with that of eastern and southern Ukraine—rather than recognizing that it had no local support and was defeated by Ukrainian patriots.

The two groups differ in only one significant way: Putin’s great power imperialists have used military force against Ukraine, while Russian democrats and patriots would be more likely to follow Boris Yeltsin’s use of other forms of pressure toward Ukraine.

One way or the other, the concept of pan-Russianism that prevails among all Russians, including democracy advocates, is something US government policymakers may not grasp or may fail to appreciate. And yet, if US policy goals are to be achieved, it is critical that this mindset be taken into account before funding is allocated to Russian opposition groups.