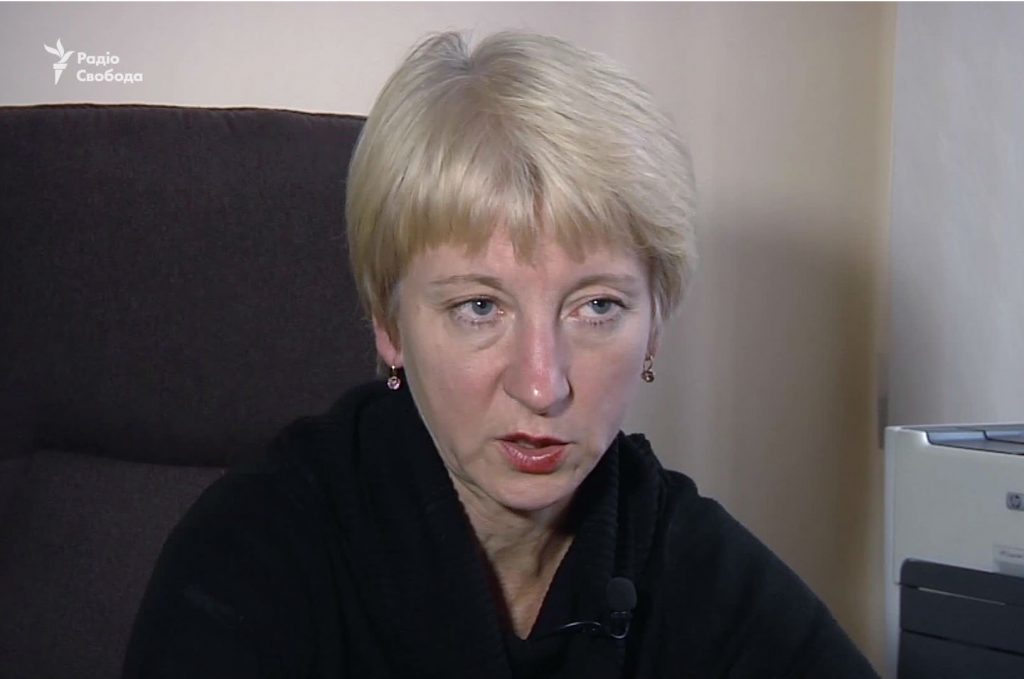 After the 2013-2014 Euromaidan Revolution, hopes were high for the introduction of the rule of law in Ukraine.

But five years later the demand for justice is still unfulfilled.

Judges implicated in corruption and political cases have tended to be promoted, and those few known for their integrity and independence have been demoted and fired.

To create an island of justice in Ukraine’s corrupt judiciary, civil society and the nation’s Western partners have demanded the creation of the High Anti-Corruption Court, whose members are being selected now.

But members of the Public Integrity Council, the judiciary’s civil society watchdog, say the authorities have all the tools at their disposal to block the selection of the most professional, independent, and impeccable candidates.

One of the few judges known for independence is whistleblower Larysa Golnyk.

“If you dare to become a whistleblower, you can be punished,” Golnyk said. “I have the feeling that I’m being punished and that independent behavior is deemed unacceptable.”

In 2015 Golnyk, a judge on Poltava’s Oktyabrsky District Court, published a video that featured then Poltava Mayor Oleksandr Mamai pressuring her to close an administrative corruption case in which he was accused of unlawfully allocating land plots to his stepdaughter. Mamai declined to comment.

In another video published by Golnyk, Mamai’s ex-deputy Dmytro Trykhna offered to give Golnyk a bribe on Mamai’s behalf in exchange for closing the case. Trykhna denies offering a bribe.

Instead of being promoted for speaking out, Golnyk has been punished.

Unlike many other judges, Golnyk has not been reappointed as a judge for life after her initial five-year stint expired in 2015.

The High Council of Justice nominated Golnyk as a judge for life in February but President Petro Poroshenko has not yet signed her credentials. Lawyers say Poroshenko violated the law because he was required to appoint Golnyk within a month after she was nominated.

“This may be a signal from the president to a disloyal judge.” said Roman Maselko, Golnyk’s lawyer and a member of the Public Integrity Council.

Golnyk has also accused Oleksandr Strukov, the chairman of the Oktyabrsky Court, of pressuring and physically assaulting her in connection with the Mamai case, which Strukov denies.

In May the High Council of Justice reprimanded Golnyk for comparing her colleagues at the Oktyabrsky Court to sheep when they reelected Strukov as the court’s chairman and for allegedly “disrupting” a meeting of judges by inviting her supporters to the court building.

Golnyk was also beaten by unknown men in 2017 in what she sees as revenge for her whistleblowing campaign. The police have failed to identify the attackers.

In October she was also blocked by the High Qualification Commission of Judges from applying for a job on the High Anti-Corruption Court due to the reprimand she received in May. However, she sees the move as payback.

Under Ukrainian law and the United Nations Convention Against Corruption, whistleblowers are entitled to special protection and cannot be fired or punished because of their whistleblowing activities, Maselko said.

In September a Poltava court acquitted Trykhna, triggering accusations of political pressure on the judge.

However, the Golnyk scandal helped change Mamai’s image, with the Poltava City Council firing the mayor in September.

Meanwhile, Strukov was reprimanded by the High Qualification Commission in May for his discriminatory behavior toward Golnyk but has not been fired or prosecuted.

Golnyk is not the only whistleblower rejected by Ukraine’s judicial class.

During the selection of a new Supreme Court in 2017, almost all candidates known for their independence or outspokenness were not selected.  These include Judges Serhiy Bondarenko, Roman Bregei, Mykhailo Slobodin, and Serhiy Chumak and lawyer Maksym Selivanov.

In contrast, at least thirty candidates accused of violating ethical standards and implicated in corruption or political cases were appointed to the “renewed” Supreme Court last year.

They were banned by the Public Integrity Council but the High Qualification Commission and the High Council of Justice ignored their vetoes.

One of the most prominent cases is that of Olga Stupak, who was appointed as a Supreme Court judge in November 2017 despite having been banned by the Public Integrity Council.

Stupak is being investigated by the National Anti-Corruption Bureau of Ukraine (NABU) for unlawful enrichment.

During the Supreme Court competition, Stupak said that her husband used income from the sale of a Land Cruiser and savings to buy a 2016 BMW X5. According to an August 14 court ruling, her family sold the Land Cruiser more than a month after the purchase of the BMW X5. Stupak’s claim is false.

Stupak also said that her 76-year-old mother-in-law had used her business income to buy a 1.8 million hryvnia mansion. But the August 14 ruling refutes her claim; her mother-in-law took the money from Stupak’s husband’s account.

Stupak also violated the law by failing to disclose the house in her asset declaration before the Supreme Court competition, although she admitted during the competition that she had been living there, Maselko said.

Stupak did not respond to a request for comment, while the Supreme Court said that the High Qualification Commission had checked all the information about Stupak.

The ongoing competition for the High Anti-Corruption Court, which began in August, will show who gets the upper hand: the best or the most politically loyal candidates.

The decision to ban Golnyk from the competition is a bad sign, according to members of the Public Integrity Council.

Vitaly Tytych, the coordinator of the Public Integrity Council, believes the High Qualification Commission will opt for politically loyal lawyers without a clear record of corruption who can be easily controlled by the government. They are in fact the most dangerous candidates because, unlike tainted judges with an obvious record of corruption, it’s harder to identify them, he said.

That’s why Public Integrity Council members are pushing for a strong role for the six-member Public Council of International Experts (PCIE), a body of foreigners who will assist the High Qualification Commission in the court’s selection. The expert panel, which was appointed on November 6, must ensure that the competition for the court is not rigged.

If a majority of both the High Qualification Commission and the PCIE votes for a candidate, he or she will continue their participation in the competition, given that at least three of the six PCIE members approve of the candidate.

Some interpret the law as the PCIE’s power to veto the worst candidates. Tytych, however, argues that such an interpretation would undermine the whole purpose of the competition and would contradict the spirit of the law: the law obliges the PCIE to choose the best, most professional, and most independent candidates and not only veto some of the worst.

Moreover, vetoing some of the worst will not work because the rest of the candidates appointed by the High Qualification Commission may still be politically dependent, corrupt or incompetent due to the commission’s arbitrary and subjective assessment methodology, Tytych said. The commission has denied the arbitrariness of its methodology.

To choose the best candidates, the PCIE will need full access to the profiles, personal data, and exam results of all who participate. However, it’s still unclear if the High Qualification Commission will allow the PCIE this access.

The commission said in a written response that the PCIE would get access to High Qualification Commission materials “taking into account restrictions set by Ukrainian law.”

“The system is stronger,” Golnyk wrote on Facebook on November 5 in a reference to the competition for the anti-corruption court. “It’s trying to expel and neutralize me and people like me. I didn’t think our struggle would be so long, exhausting, and far-reaching. But we must continue… and win.”

Oleg Sukhov is a reporter for the Kyiv Post.

Image: Larysa Golnyk is an outspoken judge on Poltava’s Oktyabrsky District Court with a reputation for independence and honesty. Credit: RFE/RL