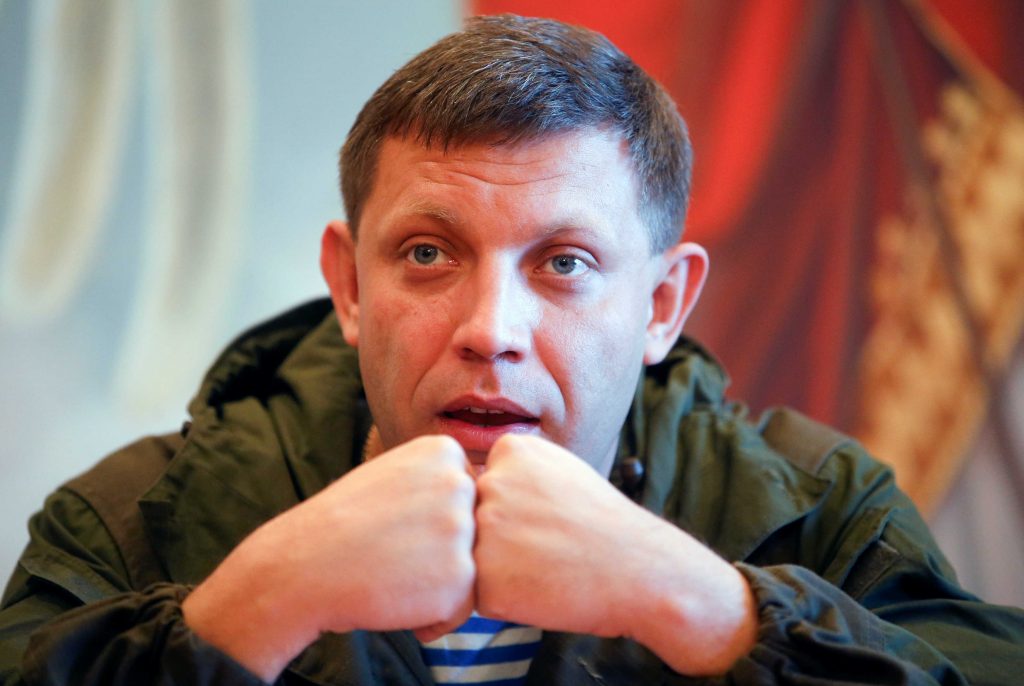 Alexander Zakharchenko, the former leader of the self-proclaimed Donetsk People's Republic, speaks to the media during a visit to Makeevskiy coking plant in Makiivka, outside Donetsk, Ukraine October 29, 2014. REUTERS/Maxim Zmeyev/File Photo

Reporting on the recent killing of Alexander Zakharchenko in Donetsk, Ukraine, has enraged many, and with good reason. Far too many reports from top outlets included the phrase or something similar, “Moscow denies sending regular troops and heavy weaponry to Ukraine, the rebels, or separatists.” Of course, Moscow regularly issues such denials. However, the time to simply report such claims by Moscow as if they are of equal validity to Ukraine’s claims is long past.

“Moscow denies sending troops and weapons into Ukraine” should always be followed by “despite overwhelming evidence to the contrary.”

If a journalist does not know that there is abundant open-source evidence of Russian military involvement in Ukraine, they shouldn’t be journalists. If they repeat Moscow’s claim, in some blind commitment to the idea of “balance” or for any other reason, they are leaving their audience uninformed, and that is a disservice. Claims made by Kyiv and Moscow should not be treated equally; there is overwhelming evidence to substantiate Kyiv’s claims about the origins and continuation of the war in the Donbas, and that evidence proves Moscow’s claims to be outrageously false.

Guilty news outlets include the BBC, Reuters, The Guardian, The Financial Times, RFE/RL, and the LA Times. Journalists would be wise to heed a journalism 101 lesson: “If someone says it’s raining and another person says it’s dry, it’s not your job to quote them both. Your job is to look out the window and find out which is true.”

The truth behind the war in Ukraine is that it was created behind the walls of the Kremlin. There has never been any appetite for separatism in the Donbas.

The US special envoy to Ukraine, Ambassador Kurt Volker, made this point a year ago: “The conflict in eastern Ukraine is not an indigenous uprising, it’s an externally driven conflict, and Russia is responsible.”

Now there’s a legitimate debate to be had over the terms “rebels” and “separatists.” Both are misleading terms, and misleading in a way that directly supports Russia’s false narrative about the conflict in the Donbas.

Collins English dictionary defines rebel as “people who are fighting against their own country’s army in order to change the political system there.”

The same dictionary offers the following definition for separatists: “Organizations and activities within a country involve members of a group of people who want to establish their own separate government or are trying to do so.”

Because the war in the Donbas was not a local uprising, and because it is an interstate war between two countries, the terms “rebels” and “separatists” aren’t accurate. In the early days of the war, and with the fog of war clouding clearer understandings of what was actually happening, and because of Russia’s attempts to portray the war as something it never was, the media adopted these terms and accepted them as accurate. We know far more now, and it is time to retire these terms.

While there are some locals in the Donbas who have participated in hostilities, it is also true that they do so at the behest of Russia. The late Zakharchenko himself was indeed a Donetsk native, but he and his replacement are nothing more than proxies for Russia and Russian interests. They have no authority of their own, and would have no ability to fight were it not for the thousands of pieces of military hardware that Russia has sent across Ukraine’s borders. Something for which, again, there is ample evidence.

What term should be used instead? In a recent tweet, the US Embassy in Kyiv used “Russian armed forces” and this is an approach many favor. It reflects the official position of Ukraine’s government which has formally declared Russia as the aggressor state in this conflict.

Others use “Russian-backed” forces, but it also downplays Russia’s actual role in Ukraine. “Russian-led” is more accurate, but since the direction, hardware, manpower, and the ammunition all come from Russia, the term “Russian forces” is most accurate.

To continue to use the terms “rebels” or “separatists” is to misinform. And misinform in a way that masks Russia’s culpability in starting and continuing this war.

Paul Niland is a longtime Kyiv resident and the founder and CEO of Statement Email Ltd. He tweets @PaulNiland.