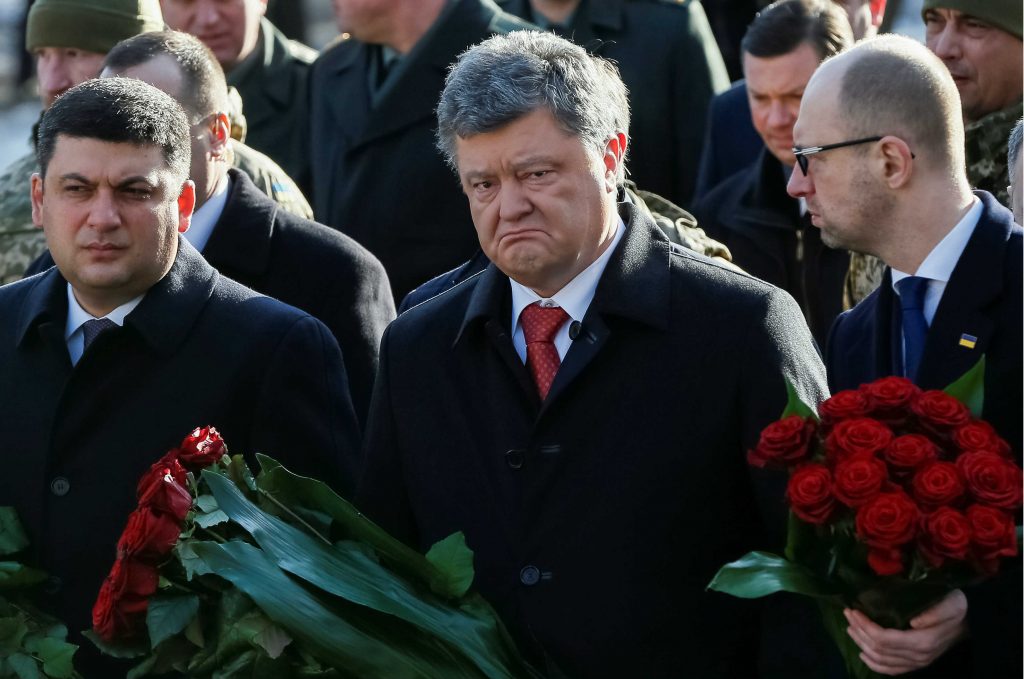 President Petro Poroshenko’s passivity in the fight against corruption has restored the old rules of Ukrainian politics and renewed the significance of the oligarchs. They’re his main partners now. The search for a new prime minister is only part of this ignoble process. Over the last two months, Poroshenko has managed to back himself into a corner, gradually destroying his own reputation and turning his allies into enemies. The government of Volodymyr Groisman will be the last one where the President can count on a majority. From now on, it’s only going to get worse.

The mistake that led to the current crisis was made in the summer of 2014. At that time, contrary to the promises made by candidate Poroshenko, parliamentary elections took place according to former President Viktor Yanukovych’s mixed system. This was convenient for Poroshenko because it allowed him to cobble together a coalition of single-mandate winners, but it opened the doors of post-Maidan politics to the forces of corruption.

The result of the 2014 elections, when single-mandate constituencies played a major role, was the utter degradation of the political class and the transformation of the Rada into the biggest business club in Europe.

The two months after the failed vote against former Prime Minister Arseniy Yatsenyuk on February 16 were a black hole for Poroshenko. It swallowed up his popularity, trust, and democratic standards. Along the way, we saw Members of Parliament Mykola Tomenko and Yehor Firsov stripped of their mandates and the parallel absorption of placeholders into the Poroshenko faction, criminal cases against former Deputy General Prosecutor David Sakvarelidze’s team and the Anti-Corruption Action Center, the promise to interrogate the US Ambassador and the scandal with the Panama Papers, accusations of hybrid war against The New York Times, the dropping of charges against former Yanukovych ally Yuriy Ivanyushchenko, the nighttime hunt for former Deputy General Prosecutor Vitaliy Kasko, and the rewriting of the law to appoint Yuri Lutsenko prosecutor general even though he has no legal education.

Poroshenko’s rules for running the country have led the government to a dead end it has spent two months trying to escape. The desire to control everything and the inability to delegate anything have not only exhausted a President who rarely leaves the office before two in the morning; they have also killed the desire to join the government among many who understand that the only role they would have to play there would be that of window dressing. You’ll be responsible for what happens while the real decisions are made by the President’s cronies.

By leaving Ihor Kononenko in parliament after the revelations of former Economy and Trade Minister Aivaras Abramovicius, Poroshenko detonated the only real capital any politician has—the trust others have in him. Poroshenko’s desire to have a tame prosecutor general lost him the American and European establishment, which fear the return of authoritarianism to Ukraine.

As a result, the President encountered resistance where he least expected it—from Groisman, his candidate for the premiership. It would be hard to find two people more alike. Groisman, like Poroshenko, comes from the business world, where making deals is how you make a profit. Your success depends on how well you sell. That’s why Groisman figured out Poroshenko’s plan so easily: with Groisman in the role of an obedient manager, the President wanted to surround him with overseers who would supervise his behavior and direct affairs behind his back. For his part, Groisman, who knows his way around Ukrainian politics, demanded to put his own people in key positions so that he would have some support in the cabinet. As a result, talks deadlocked at the beginning of the week.

By creating a government of two, the Poroshenko Bloc and the People’s Front barely cobbled together 226 votes between two factions in order to meet the formal criteria of a coalition. Taking into account that parliament will never have 100-percent attendance, the coalition will need a cushion of twenty to thirty votes at a minimum.

With Self Reliance, Fatherland, and the radicals in the opposition, the coalition’s only fallback will be the oligarchic clubs among the deputies, be they People’s Will or Renaissance. It is the oligarchs who will be the main beneficiaries of a weak prime minister who is forced to rely on a weak coalition. Every vote will involve a payment, whether it comes in the form of a job, access to funds, a contract, or a state-owned enterprise. A parliament full of single-mandate winners can’t function any other way.

This is why the new government is doomed to corruption scandals. The worst part is that a parliament full of single-mandate winners who have tasted the fruits of the state’s coffers will be incapable of changing the election law on its own. They will only do this under pressure from the street or Western donors.

Ukrainian corruption isn’t just a malignant tumor; it’s become Ukraine’s dark calling card in the world. This is one of the main reasons Ukraine failed on the Dutch referendum. According to a poll, 60 percent of Euroskeptics voted “no” because of corruption in Ukraine. The Panama Papers involving the President only strengthened their case.

Time is up for Ukraine’s President to convince society, politicians, and Western partners that he’s prepared to fight corruption. Every day of delay proves the opposite. By not interfering, Poroshenko only proves that he is the main beneficiary of the status quo.

Sergii Leshchenko is a member of parliament in Ukraine and former deputy editor of Ukrayinska Pravda. This article was originally published in Russian by Novoe Vremya and has been edited for clarity.