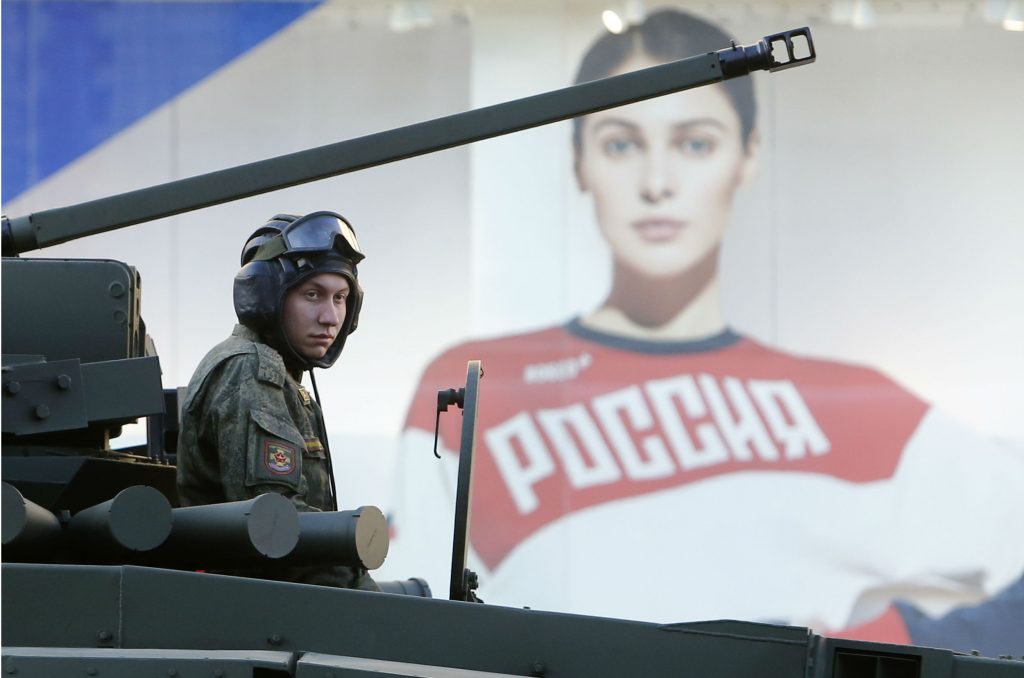 In April, reports emerged of Kremlin plans to launch a major smear campaign against Russian opposition figurehead Alexey Navalny. Within days, an expensive-looking attack video had appeared anonymously on YouTube, comparing Navalny to Adolf Hitler. The Russian authorities denied any connection to the video, but few believed them. After all, branding opponents as fascists is the Kremlin’s trademark tactic and has been for decades.

Kremlin officials have been enthusiastically playing the fascist card against all manner of opposition since the height of the Cold War. When Hungarians rose up against Soviet occupation in 1956, Moscow branded the uprising “a fascist rebellion” before sending in its tanks. It was a similar story during the Prague Spring of 1968. Communist Party officials even referred to the Berlin Wall itself as “the Anti-Fascist Protective Wall.”

This trend survived the Soviet collapse and continues today. When Estonia sought to remove a Soviet World War II monument from Tallinn’s city center in 2007, Kremlin media went into a frenzy about “Fascist Estonia,” sparking riots among Estonia’s sizable ethnic Russian population. Within days, Russia had launched the world’s first fully-fledged cyber war against the tiny Baltic state. This hybrid attack, containing disinformation and cyber elements alongside Nazi motifs designed to stir up the ethnic Russian minority, was an ominous harbinger of things to come.

The most infamous Kremlin accusations of fascism have traditionally targeted Ukraine. This did not begin in 2013 with negative Russian coverage of the Euromaidan protests; ever since World War II, Moscow sought to portray the Ukrainian independence movement as virtually indistinguishable from Nazi Germany. These efforts have typically highlighted the wartime Nazi collaboration of various Ukrainian independence leaders, while whitewashing the USSR’s own 1939-41 alliance with Hitler.

In the post-Soviet era, Kremlin media outlets first began actively labeling Ukrainians fascists as far back as 2004. At the time, Viktor Yushchenko was running for the presidency on a reformist ticket while promising to move Ukraine closer to the EU. The “fascist Ukraine” theme has remained a constant feature of Russian propaganda ever since, rising to new prominence in 2013-14 as the cornerstone of the Kremlin’s efforts to discredit the Euromaidan and justify the Russian invasion of Crimea and eastern Ukraine. Neither the abject failure of Ukraine’s far-right political parties in successive post-Euromaidan elections nor the appointment of a Jewish prime minister have proved sufficient to debunk these slurs. Russia simply has no other explanation for the loss of another friend and ally.

Why is the Kremlin so fixated on phantom fascists? It may be out of necessity rather than choice. In the soft power battle of ideas that determines international dominance today, Russia is virtually unarmed. It has no coherent ideology to place in opposition to the relative rights and freedoms of democratic nations. There is simply no answer to the higher standards of living, longer life expectancy, and greater protections offered by the Western model. By playing the fascist card and reawakening the ghosts of World War II, the Kremlin seeks to distract domestic audiences from these glaring shortcomings while laying claim to the moral high ground.

Russians of all ages find this approach hard to resist. The fight against Hitler continues to carry a uniquely emotive appeal for today’s Russians, who see themselves as the successor state to the Soviet Union and its twenty-seven million World War II war dead. Putin has skillfully exploited these Russian sensibilities. He has made annual Victory Day celebrations the centerpiece of the Kremlin calendar, while transforming the Red Army triumph over Nazi Germany into the foundation myth of the modern Russian state. Once a somber celebration dedicated to mourning fallen comrades and lost loved ones, Victory Day has become an entire season of jingoistic excess, with new national rituals introduced on a yearly basis amid a victory cult that surpasses anything seen during the Soviet era.

As well as obscuring contemporary Russia’s shortcomings, the focus on Nazi Germany’s defeat also serves to overshadow the horrors of the Stalinist regime, with Soviet crimes against humanity frequently written off as necessary preludes to the successful war effort. Questioning any aspect of this narrative is akin to heresy. This sacred status makes World War II a uniquely powerful propaganda weapon against anti-Kremlin dissenters. In this context, the glorification of the Red Army and the demonization of all opponents as fascists are two sides of the same coin. To sympathize with the “fascist” is to desecrate the memory of those who gave their lives to overcome Hitler. It is not just a crime—it is a sin. This is not a particularly rational argument, but it is emotionally explosive when backed up by the full force of the Kremlin media machine.

There are some indications that this form of emotional blackmail may finally be losing its potency. The Navalny attack video, for example, disappeared from YouTube within days following a chorus of mockery. It failed to strike a chord with the young Russians it was seeking to influence. Nevertheless, it is still too early to declare that Russia has reached “peak fascism.” The Kremlin has no alternative messages capable of energizing domestic audiences in anything like the same manner as World War II. In the absence of recent national achievements, the defeat of Hitler looks set to remain the lodestar of the Putinist state for the foreseeable future. As a result, the Russian public appears doomed to continue obsessing over phantom fascists until their country can compete with the modern world.

Image: A Russian serviceman is seen onboard an armored vehicle in Tverskaya street before the rehearsal for the Victory Day parade in central Moscow, Russia, May 3, 2017. The sign behind a shop window in the background reads "Russia." REUTERS/Sergei Karpukhin