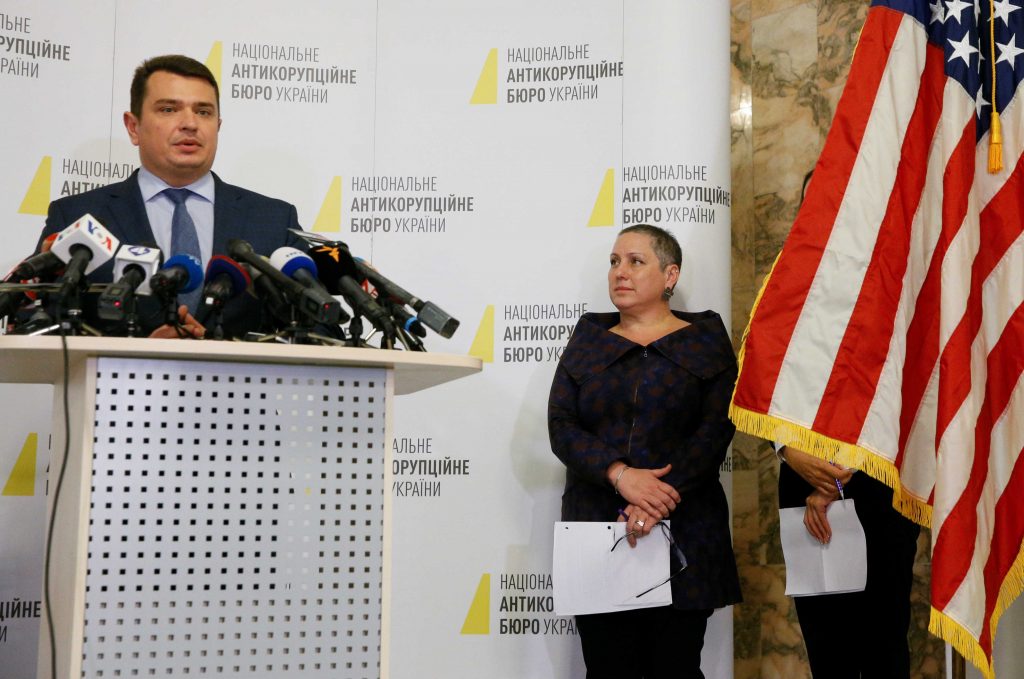 The experience of the past four years shows that in Ukraine, it is far easier and more effective to shrink the space for corrupt practices than to deter corruption by punishing guilty individuals. To this extent, Ukraine’s anti-corruption reforms have been working.

The reforms that have occurred in the gas sector, tax system, banking sector, and procurement system are substantial, even if they are not complete. Initial progress on deregulation and vastly increased transparency are contributing to a slowly improving business environment. Decentralization is also creating new opportunities for citizens to hold local authorities accountable.

Five years ago, such achievements were inconceivable. Still, progress is lacking in priority areas such as customs, privatization, de-monopolization, and reform of public administration. Defense spending is particularly opaque. Corruption schemes remain untouched in some parts of the energy sector. Reforms of the law enforcement agencies are proceeding slowly if at all. It is too early to say whether judicial reform will lead to improvements in the courts’ functioning because of the deep underlying culture of corruption there. Overhauls of the civil service, SBU, tax service, judiciary, and agencies that inspect business are also essential.

The much-promised punitive actions against corrupt officials have not materialized. The National Anti-Corruption Bureau (NABU) has yet to achieve a single high-level prosecution because of the influence of vested interests on the judiciary. This situation should change for the better after the formation of the Anti-Corruption Court, but there may be a risk of selective justice.

But even when successfully carried through, punitive measures on their own can only have a limited effect: challenging the system head-on by trying to put corrupt officials behind bars will not change its essence. Corruption is a symptom of a poor system of governance, not the cause of it. Success will require more than new laws and dedicated anti-corruption bodies. Ultimately, it will require consensus among the elites to change the rules.

The history of Western Europe shows that this can happen when elites see a benefit in developing institutions to secure their property rights and access to rents, rather than relying on personal patronage and clientelism. In social science, this is known as the transition from a “limited access order,” in which a narrow group of powerful individuals dominates, to an “open access order,” which admits a wider set of interests based on impersonal social relationships.

Resistance to the opening of a limited access order is often considerable because corruption is not only a tool that enriches the ruling elites, but also an indispensable instrument of administration. Mid- and low-level officials typically require incentives to execute orders in the form of privileges or side payments. At the same time, low-level officials are often required to collect or even extort bribes and channel them to their superiors.

As in much of the former Soviet Union, the limited access order in Ukraine is characterized by overregulation, in tandem with space for the bureaucracy to enforce selectively rules and norms that are intentionally made impracticable so that the authorities have leverage. This combination not only gives the power groups that make the rules significant influence over others in society; it also provides them with the ability to create patron–client networks that ensure the loyalty of the bureaucracy. The bureaucracy gains a stake in the system through selective enforcement of the rules on behalf of its patrons.

Corruption in Ukraine is not a disease, but rather a manifestation of deep-rooted systemic and cultural phenomena that is not permanent. International agencies and donor governments, however, perceive corruption as a type of “rust” plaguing state institutions and requiring removal with an “iron brush” in the form of harsh punitive measures.

According to this logic, the more senior officials jailed, the less corruption there will be and the better state institutions will perform. Even if it were possible to establish punitive measures to deter officials from extracting private benefits, there is no guarantee that the old institutions would start working better. Some might even function worse, if officials deprived of their access to privileges lost the incentive to perform their basic duties. This system is not just corrupt; it runs on corruption.

Punitive measures on their own can only have a limited effect on reducing this sort of corruption. For now, such actions are likely to remain a blunt instrument, as the nature of the system has not yet changed sufficiently to allow them to target senior members of the elite. In other words, challenging this system head-on by trying to put corrupt officials behind bars will not change its essence.

Instead, key interest groups need encouragement to evolve in response to the development of a business climate based on creating value rather than extracting rents. Punitive measures must be part of a comprehensive strategy to reduce the space for corrupt practices and open the political and economic systems to greater competition. This requires de-monopolizing politics, and encouraging Ukraine’s power groups to accept new rules.

Robert Klitgaard’s classic definition, corruption equals monopoly plus discretion minus accountability (C = M + D − A) is particularly relevant. In the case of Ukraine, reducing corruption requires limiting the scope for monopoly decision-making and replacing officials accustomed to personal power with civil servants who are skilled in impersonal and strict implementation of the rules and genuinely committed to the public good.

Neither approach can work in isolation. Prevention and punishment should be viewed as instruments of a broader systemic transformation of the social order, with punishment being an important but secondary element that can support prevention. Anti-corruption investigations should target the staunchest opponents of the reforms in the power groups. More accommodating forces should ultimately receive amnesties in return for not obstructing the reforms’ implementation; this would help incentivize some of the elite to support systemic transformation. Building strong and capable institutions staffed by officials with integrity should remain a high priority.

After a slow start, reform of public administration is moving in the right direction. This momentum must be maintained. NABU is a powerful example of a new professional agency with different values. Rigorous selection procedures for appointments that involved civil society were essential in the process.

Root-and-branch judicial reform remains essential and should be a priority. Far greater attention needs to be paid to the judiciary’s lack of political independence and need for a shift in its institutional culture.

For progress on curbing corruption, it is essential that the new election law open up the political system to newcomers. It can potentially serve as the catalyst for systemic transformation. Those in power understand this very well, which explains their foot-dragging on their commitment to electoral reform in the 2014 coalition agreement.

But for any of this to happen, Ukraine’s elites and the general public alike need to believe that they will gain from a behavior shift, and that they will lose out if they continue as is.

The elites will commit themselves to dismantling the limited access order only if they trust that they will not have to pay for past sins in the form of criminal prosecution or expropriation. At the same time, citizens must be confident that this is a better option than the superficially attractive solution of jailing elites. And ultimately, they must also recognize that it is no longer acceptable to live with the contradiction that senior officials should not engage in corruption while the public remains open to the possibility of paying bribes as an easy way to settle issues. These are two sides of the same coin.

John Lough is an associate fellow with the Russia & Eurasia Program at Chatham House in London. Vladimir Dubrovskiy is a senior economist with CASE Ukraine.

Editor’s note: This analysis summarises the Chatham House research report on Ukraine’s anti-corruption reforms published in November. It is available at https://www.chathamhouse.org/publication/are-ukraines-anti-corruption-reforms-working