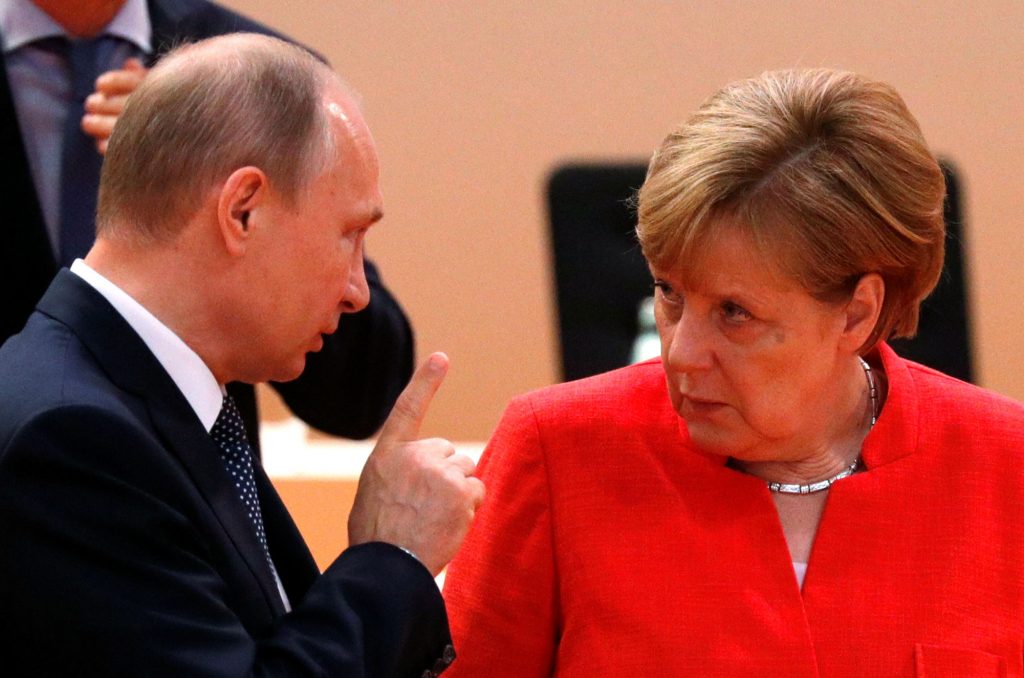 Of all nations, Germany must heed the lessons of history, both current and past. This begs the question as to why Germany would help Europe become more energy dependent on a country like Russia that ignores norms, contracts, laws, treaties, and borders.

And yet that is exactly what Germany is about to do if it approves Gazprom’s $11.5-billion pipeline gas megaproject called Nord Stream 2. Proponents argue that the pipeline is an “economic project” that simply will deliver cheaper gas to German industries and turn Germany into a European hub for Russian gas. They say this is the same gas, only a different pipeline.

But this is not an “economic” project and this is not just a different pipeline. This is a chilling move in Vladimir Putin’s chess game designed to recapture his Soviet empire. And Germany is playing checkers.

Currently, Russian gas arrives in Europe through two pipelines—one through Belarus and Poland and another through Ukraine and Slovakia. Nord Stream 2, along with the existing Nord Stream 1, will transit under the Baltic Sea and bypass, and eventually close, existing routes, creating a dangerous, and vulnerable, infrastructure dependency.

The implications for Ukraine are dire, not merely because it will lose $2 billion a year in transit fees, but because Russia will be able to cut off supplies to the country and pave the way for more control.

This is not fiction. Before and since the war with Russia began in 2014, Ukraine has reliably shipped Russian gas through its pipeline to European customers. But it has been forced to buy back enough Russian gas for itself, from its European customers in order to keep the lights and heat on, because of Gazprom’s manipulations.
Nord Stream 2 will flood the market with so much gas that Central and Eastern European countries will lose access and the incentive to buy competing gas from Western Europe.

Even worse, Western Europe will also become more dependent on Russian gas down the road as gas reserves in Norway and The Netherlands diminish.

“Once Nord Stream 2 is built, Putin can do with Ukraine whatever he wants, and then we have potentially his army on the eastern border of the EU,” stated Poland’s Prime Minister Mateusz Morawiecki last week.

This looming dependence on a lawless monopoly is why twenty of the European Union’s twenty-eight members oppose Nord Stream 2, as does the European Commission. But laws allegedly fall short of preventing construction or putting into place protections which, frankly, won’t work anyway given Gazprom’s past behavior.

If the line, and the Turkish one, are complete, Putin will drive Ukraine out of the pipeline business, into bankruptcy by overcharging, or onto its knees by denying gas altogether. Likewise, all the other small countries will be forced to make direct deals with Gazprom, providing the Russians with leverage over their economies and politics.

Washington joined the concern by Europe and last week, 39 US Senators, led by John McCain, wrote to US Secretary of the Treasury to encourage stoppage of the project. “It would undermine the economy of Ukraine and other gas transit countries in Central Europe by allowing Russia to reduce or even cut off gas supplies to those countries with impunity. By circumventing Ukraine, Nord Stream 2 will remove one of biggest reasons for Russia to avoid large-scale conflict in eastern Ukraine.”

Strangely, Germany’s Nord Stream 2 supporters, including German Chancellor Angela Merkel, maintain against all evidence that Gazprom’s Nord Stream 2 is strictly an “economic deal,” and not political. They also believe that market abuse won’t occur against Germany or the others and that Ukraine’s pipeline will remain operational.

But consider recent behavior by Gazprom. Since 2010, Gazprom has been under investigation by Europe’s anti-trust officials for market abuse against a number of these nations. And last month a Swedish Court awarded Ukraine $2.56 billion from Gazprom for years of market abuse, and has already reneged on some of its terms such as supplying gas to Ukraine’s domestic market.

Ukraine’s Andriy Kobolyev, CEO of Naftogaz, says these warning signs should be heeded by Europe. At a recent security conference, he hinted that, in anticipation of Gazprom playing its usual tricks by appealing the award, his firm will have to start seizing $2.56 billion Gazprom assets as payment across Europe including Nord Stream 2 assets.

Ironically, seizures by Ukraine may provide the only brake on the Nord Stream 2 strategy unless Germans and Europeans wake up to the grand game underway at the Kremlin.

Germany must disavow thinking that Russia would not abuse them as it has Ukraine, Slovakia, and others. It must realize that if gas prices are hiked and volumes cut, they will also have no recourse. Will the Germans sue Gazprom? Will they send to Moscow cadres of Berlin executives and lawyers with briefcases? Petition the European Commission? The United Nations? Europe’s energy authorities? Or be forced to shut down schools and industries then burn dirty coal and impose sanctions?

Europe must get its act together and stop this naïve thinking until ramifications are fully understood by the public. Putin is already several moves ahead.