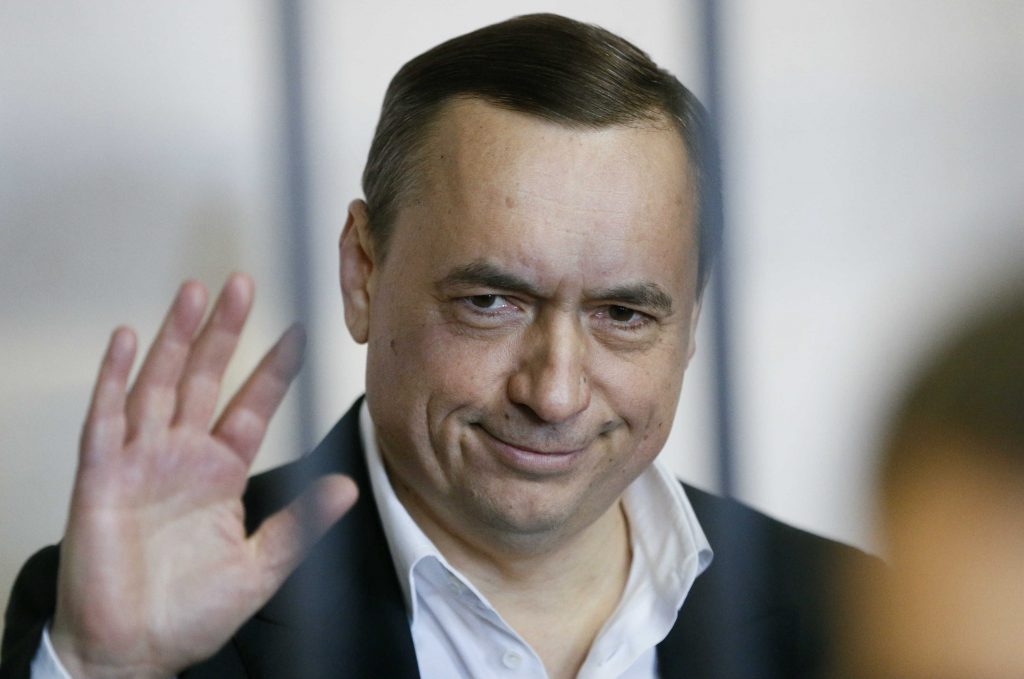 Ukrainian former lawmaker Mykola Martynenko, who is under investigation over the suspected embezzlement, gestures inside the defendant's cage as he attends a court hearing in Kyiv, Ukraine, April 21, 2017. REUTERS/Valentyn Ogirenko

In July, a Kyiv court released Roman Tymkiv, the head of a state-owned military plant, on bail. Tymkiv was accused of embezzling $1 million by supplying the Ukrainian army with used tank engines for the price of new ones.

In May, the same court released former member of parliament Mykola Martynenko, suspected of embezzling $17 million, on bail.

In ordinary criminal cases, suspects normally go to jail for at least two months for theft that exceeds $20, but of course, Tymkiv and Martynenko walked away.

These few examples show why no high-level corrupt public officials have been put behind bars. This was the central demand of the Maidan, and it remains unfulfilled.

Throughout the year, elites claimed that Ukraine does not need an independent anti-corruption court and the old system would finally deliver. But the public and the international community weren’t convinced, especially after the effort to rebuild the Supreme Court flopped and the National Anti-Corruption Bureau of Ukraine’s (NABU) independence was attacked.

On December 22, President Petro Poroshenko finally submitted his draft law that would establish an anti-corruption court, after resisting the demand for more than a year. Civil society, the International Monetary Fund, and the World Bank have said his draft falls short of Ukraine’s stated commitments and will not bring high-level justice to Ukraine.

The draft does one thing right; it establishes an independent anti-corruption court with a means to appeal. However, the selection process of judges remains open to political influence, the court will be overloaded with cases and unable to deliver, and there may not be enough qualified candidates to establish the court. Most worryingly, the draft law provides ample opportunities to postpone the creation of the court indefinitely.

Selecting judges without the influence of the president or parliament is an obvious must. It’s easier said than done. The selection of truly independent Supreme Court judges failed; more than twenty judges with dodgy reputations now enjoy lifetime appointments.

Based on this experience, the Venice Commission recommended that international donors should play a more active role in the selection of anti-corruption judges. This was seen as a guarantee against domestic political interests.

However, the presidential draft envisions only an advisory role for a council of international experts with no real influence on decisions.

In fact, the draft law offers the Supreme Court model, which failed in 2017. It would create a council of international experts, similar to the public integrity council of NGO experts in the Supreme Court selection, whose advice will either be considered or overruled by the Qualification Commission of Judges. During the Supreme Court process, 60 percent of advisory opinions were ignored, and judges with poor human rights records, assets they cannot explain, and participation in internationally recognized cases of political persecution make up 20 percent of the new Supreme Court. We should expect the same outcome if we use the same model.

The presidential administration claims that international involvement in the selection of judges endangers Ukraine’s sovereignty. This argument is nonsense and ignores the wishes of the Ukrainian people. The people of Ukraine want international experts to help us finally clean up this sector. Polls show that 41 percent of people trust foreign experts to recommend the right judges, while only 10 percent trust judicial bodies and 6 percent trust the president’s representatives.

The draft law does not limit the jurisdiction of the court to high-profile corruption cases. Instead of limiting the court’s jurisdiction to cases investigated by NABU as the Venice Commission recommended, the bill gives the court authority over cases unrelated to high-profile corruption. In addition, some of NABU’s important cases, such as fraud in top officials’ asset declarations or money laundering, will go to ordinary courts.

If the president’s law is adopted, it will create an anti-corruption court that is too busy to deliver on high-profile corruption crimes, and that may be the point.

All candidates are required to have experience in “legal assistance in anticorruption in foreign jurisdictional bodies or international judicial bodies abroad.” Although this requirement may sound good, this provision limits the number of potential candidates to a dozen people. Finding enough candidates may prove challenging and doom the court, since it only becomes operational after two-thirds of its judges are appointed. Therefore, we fear that unrealistic eligibility requirements for anticorruption judges will guarantee that the court cannot be created.

Of course, these drawbacks aren’t an exhaustive list. There’s been talk that another law would need to be adopted to launch the court. This means probably another year-long delay.

The IMF and the World Bank share our concerns. Both institutions have said that only if the court has the proper jurisdiction and there’s international participation in the selection of judges will they give Ukraine access to $800 million in loan guarantees and a $1 billion low-interest loan. Actions speak louder than words: last year, Kyiv secured $3 billion through more expensive but unconditioned loans. However, this won’t be enough to cover Ukraine’s debt, a huge part of which comes due in 2019. We still need the IMF money.

Facing pressure from financial institutions, Poroshenko said he’s open to amending the bill during the second reading in parliament. This promise is tricky: shifting decision-making to parliament is the president’s preferred tactic for adopting bad legislation without bearing any responsibility. Parliament will be unable to deliver on its own. Therefore, the only way to improve the current bill is to continue to pressure Poroshenko and Arseniy Yatsenyuk, the leader of the People’s Front, who share control over major decisions in parliament. That’s where civil society is putting its energy, and where the West should, too. We are counting on Western financial institutions and embassies to keep the pressure on.

Anastasia Krasnosilska is an advocacy officer at the Anti-Corruption Action Center in Ukraine.