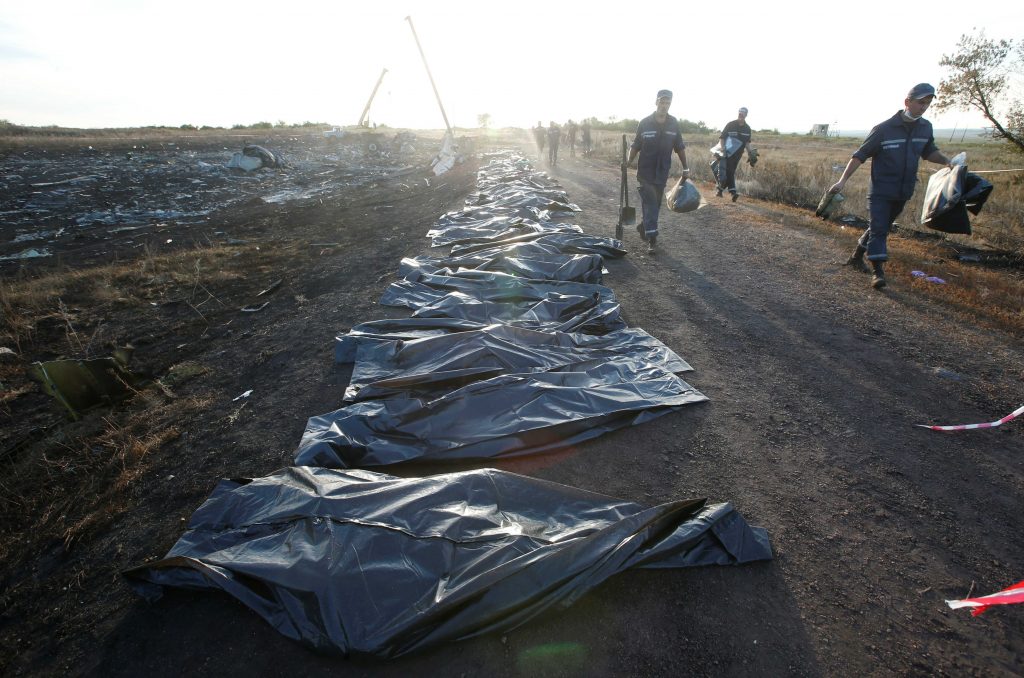 Imagine the scene: a patch of overgrown wasteland on the outskirts of an east Ukrainian rust belt town. Emergency services personnel are methodically excavating a large plot of earth while a huddle of journalists and aid workers look on. The date is October 2019. Another mass grave has just been uncovered.

This grim but all-too-conceivable scenario is perhaps the most compelling reason why Russian President Vladimir Putin’s recent UN peacekeeper posturing over Ukraine is hard to take seriously. The desire to keep evidence of war crimes from reaching international audiences is just one of many reasons why the prospect of peace is not only impractical but also unpalatable from Putin’s perspective. While the Russian leader may genuinely wish to extricate himself from the quagmire he has created, it is difficult to see how he could do so without courting disaster.

First and foremost, any Russian withdrawal from the Donbas would open up a veritable Pandora’s box of revelations. The Kremlin’s general involvement in eastern Ukraine has long been the world’s worst kept secret, but details of Russia’s exact role remain clouded in hearsay and are subject to furious denial. This would change dramatically if Moscow pulled its troops out. An intricate picture of Putin’s secret war would soon emerge, leaving him hopelessly exposed and facing demands to answer for both the loss of life and the endless lies.

Even the most ancient of battlefields is still capable of yielding clues, so it is reasonable to assume that evidence of Russian war crimes litters the towns and cities of the Donbas. Armies of journalists and civil society activists are already poised to comb the entire region as soon as they receive access. Alongside them would be families from both sides of the conflict searching for signs of missing loved ones. We have already had a foretaste of what to expect thanks to the steady trickle of Malaysia Airlines Flight 17-related photos and videos that have emerged from eastern Ukraine since 2014. This information has proved crucial in identifying the Russian army unit responsible for downing the civilian airliner, but it is merely the tip of the iceberg. As well as mass graves, a Russian pullback would reveal everything from torture chambers to looted factories.

Russia has managed to prevent any definitive exposure of its activities in eastern Ukraine by tightly restricting all information flowing in and out of the region. A blanket ban on Ukrainian media dates back to the early days of the conflict, while over the past year it has become increasingly impossible for even the most accommodating international journalists to gain access. If Russia cedes physical control over the conflict zone, war crimes accusations and other damaging revelations will come thick and fast.

At that point, international outrage will be a given. However, the Kremlin is probably more concerned about the potential reaction from within Russia itself. Even a public as conditioned to everyday disinformation as modern Russians may object to the news that their leaders have spent the past four years secretly waging an illegal war against the country’s closest neighbor. As evidence of atrocities emerges, Moscow risks sparking a smaller scale repeat of the late Soviet era, when the perestroika thaw allowed the long-suppressed crimes of the Communist authorities to resurface and seal the fate of the dying empire. Putin has spent much of the past seventeen years repairing this damage and rebuilding Russia’s battered sense of national pride. He is unlikely to invite an encore.

Beyond these immediate concerns looms the broader issue of war aims. A victor can expect to receive the benefit of the doubt, but any peace agreement that leaves Ukraine firmly entrenched in the Western camp would represent a catastrophic setback for Russian interests. In this respect, Putin’s war has been disastrously self-defeating, serving to alienate an entire generation of Ukrainians while accelerating Ukraine’s post-Soviet nation-building process at the expense of Russia’s imperial ambitions. As long as the war smolders on, Putin can postpone the inevitable domestic debate over the loss of Ukraine. Once peace is established, it will no longer be possible to ignore this awkward reality.

Any subsequent recriminations would be particularly dangerous for Putin, precisely because he has been so successful in exploiting the attack on Ukraine to mobilize nationalistic sentiment within Russian society. Since 2014, tens of thousands of Russians have flocked to eastern Ukraine. Many members of the Kremlin’s hybrid forces are mercenaries and “vacationing” soldiers from the regular Russian army, but a significant portion are fanatics and true believers inspired by Putin’s talk of defending the “Russian world” from Western encroachment. Millions more have bought into the revivalist narrative of a resurgent Russia, accepting material hardships and political passivity as a price worth paying for the nation’s return to great power status. They are unlikely to be pleased if the dust settles to reveal an increasingly European Ukraine in full control of the Russian-speaking Donbas, while Russia picks up the pieces of its shattered international standing. Putin has thus far ridden the patriotic tiger with great skill, but it might be an entirely different matter if he tries to dismount.

These Russian realities cannot but erode the initial optimism generated by Putin’s sudden willingness to entertain the idea of a UN mission. Numerous commentators and government ministers responded to Putin’s September suggestion with enthusiasm, but any sober assessment of the situation must conclude that a lasting peace settlement along these lines remains unlikely. Putin’s peacekeeper proposal fails to meet the minimum requirements for a serious settlement of the conflict and bears all the hallmarks of an opportunistic gesture. It could be an attempt to discourage America from arming Ukraine while positioning Moscow in a more favorable light. It may be a ploy to fully freeze the conflict and solidify de facto Kremlin control over the Russian-occupied regions of eastern Ukraine. It is almost certainly not the first step on the road to peace.

This does not mean that all is lost. Ukraine and its international partners can still work productively to reduce the immediate threat of large-scale bloodshed by negotiating with Russia over the withdrawal of heavy weapons from the line of contact. Humanitarian efforts can return a semblance of normality to frontline communities and support the integration of displaced persons and combat veterans into wider Ukrainian society. Kyiv can focus on building up its defensive capabilities, with or without the aid of lethal weapons from the United States, while also strengthening its soft power arsenal and pursuing further Euro-Atlantic integration. As Ukraine becomes a better country for its citizens to live in, it will move closer to a victory more decisive and sustainable than anything achieved by bayonets alone.

All this will take place against a backdrop of continuing low-level conflict. The current hybrid war looks set to remain the new normal for some time, with its daily toll of fatalities, political assassinations, and cyber-attacks, along with any other acts of unconventional aggression the Kremlin can conjure up. This is an understandably unappealing prospect for ordinary Ukrainians, but they will not be the first nation forced to come to terms with a hostile neighbor. Once the immediate military threat is contained, there is no reason why the country cannot prosper as long as appropriate security measures can minimize the Russian hybrid threat. It will be hard for Ukraine, but Putin’s predicament makes it virtually inevitable. The Russian leader finds himself hopelessly entangled in his own web of deceit and appears to be stuck fast in eastern Ukraine, unable to either advance or retreat. He may no longer be able to win the war, but he dare not risk peace.

Image: Members of the Ukrainian Emergencies Ministry gather and place bodies at the crash site of Malaysia Airlines Flight MH17, near the village of Hrabove, Donetsk region, July 20, 2014. REUTERS/Maxim Zmeyev