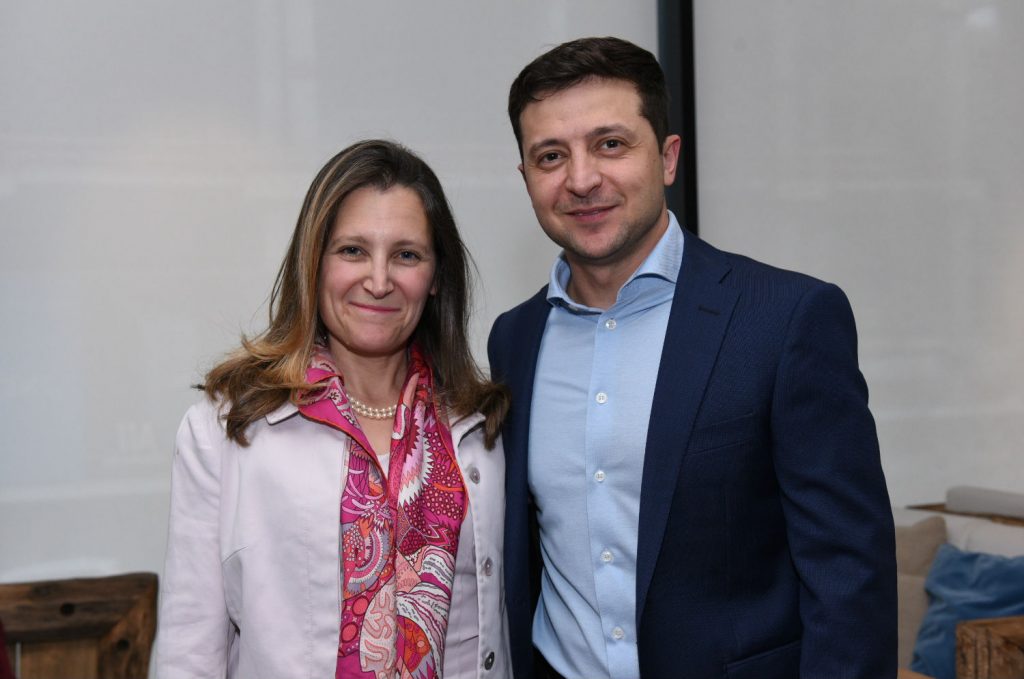 On April 21, TV comedian Volodymyr Zelenskiy won a landslide victory over incumbent President Petro Poroshenko in the second round of Ukraine’s presidential election. By winning an impressive 73 percent of the vote, Zelenskiy secured a strong popular mandate.

Questions abound about Zelenskiy’s core political beliefs and whether his performance in office will match his campaign rhetoric. Answers to these questions are speculative. However, we do know what issues animate citizens. Opinion polls consistently show Ukrainians want three things. First, they want a statesman who will stand up to Russian aggression and restore Ukraine’s sovereignty. Second, they want a reformer who will take a battering ram to the oligarchic system. Third, they want someone who will increase economic growth, boost wages, and create jobs. To the extent that Zelenskiy can make progress on these three issues, he will continue to enjoy strong popular support. Conversely, moves that undermine Ukraine’s sovereignty, cater to oligarchic interests, or jeopardize economic growth are likely to erode support.

Ukraine faces key challenges in the security, anti-corruption, and economic arenas, and the United States and the international community can advance its interests in these areas. Right now, however, the key imperative for the United States is to embrace and engage Zelenskiy and his team. The president-elect is in the process of selecting a core team of advisors and deciding on the agenda for his first 100 days in office. Soon thereafter he will make appointments to five key positions, which will say a lot about his foreign policy priorities.

The worst thing the United States could do at this critical juncture is to withdraw its ambassador from Ukraine and have no senior official on hand to engage Zelenskiy and his team. Unfortunately, that is exactly what happened last week as the State Department recalled Ambassador Marie Yovanovitch from her post and with no confirmed successor ready to assume her place. Yovanovitch served with distinction in Ukraine and capably represented the United States as its ambassador in Armenia and Kyrgyzstan during the George W. Bush administration. Recalling her now is a costly diplomatic mistake.

In spite of this, the United States must engage with Zelenskiy to offer strategic and technical advice; inform his views on diplomatic, security, economic, and governance issues; and convey its readiness to support a credible reform agenda with assistance and expert personnel. While the US cannot claim to have all the answers, it has decades of experience supporting defense, anti-corruption, and economic reforms abroad and has been actively supporting Ukrainian reforms since 2014. If the US does not engage Zelenskiy now to convey its expectations and to offer its support, it will be ceding influence to other actors, including Russia and its oligarchic proxies, who are more than eager to sway the new president.

In the security arena, Zelenskiy faces a precarious situation as Ukraine enters its sixth year of war with Russia. President Vladimir Putin’s decision to offer Russian passports to Ukrainian citizens in the Russian-occupied parts of the Donbas is provocative and bears similarities to Russia’s “passportization” policy in the Georgian regions of Abkhazia and South Ossetia prior to 2008. It may serve as a prelude to further hostilities or possibly recognition of the independence of these territories by Russia. As the Kremlin continues to pursue a land war in the Donbas and a policy of “creeping annexation” in the Sea of Azov, it will be vitally important for the United States to continue to support Ukraine with military assistance, training, and advice.

Zelenskiy’s approach to the Donbas promises to be different from Poroshenko’s. Zelenskiy has called for reversing the isolation of those who live under Russian occupation and said he wants to facilitate the provision of public services and ease travel restrictions across the line of control. Judging by the fact that pro-Russian candidate Yuriy Boyko won a plurality of votes in the Ukrainian-controlled regions of Donetsk and Luhansk during the recent presidential election, shifting toward a policy of greater engagement is a smart move. However, Russia’s incessant propaganda and the reign of terror imposed by its warlord proxies make engagement difficult. Russia preys on economically vulnerable communities in eastern Ukraine by spreading a narrative that life is getting worse, the central government in Kyiv doesn’t care, and that accommodation with Russia is the only way to make it better. USAID and other agencies should be focused on supporting efforts to ameliorate the dire living conditions in the east and finding ways to undercut Russia’s pernicious narrative.

In terms of defense reforms, Zelenskiy will inherit command responsibility for a military that is midway through a process of radical transformation. Under Poroshenko, Ukraine’s armed forces made enormous progress in strengthening readiness, training, and by acquiring advanced capabilities (including Javelin missiles from the United States). However, while some parts of the military, such as Special Operations Forces, perform at a Western standard, other parts still operate like a Soviet legacy army. Resistance to Western-style military reforms among some senior members of the General Staff have left the reform process in limbo. Zelenskiy will need US support to complete these reforms and to build up capabilities, especially in air and maritime defense, where Ukraine is sorely lacking.

Ukraine is also vulnerable on domestic issues. Anti-corruption reforms in Ukraine are incomplete. On the one hand, new and dedicated anti-corruption institutions have been successfully established. However, political pressure from vested interests, interagency competition, and ineffective management have plagued these agencies and prevented them from prosecuting corruption. So while Ukraine has notched some notable successes, such as the reform of its patrol police and certain aspects of its health care system, the overall state of its fight against corruption leaves much to be desired.

For Zelenskiy, the biggest question regarding his willingness to fight corruption revolves around the nature of his relationship with oligarch Ihor Kolomoiskiy. One of Kolomoiskiy’s chief lawyers, Andrei Bohdan, has emerged as a key Zelenskiy advisor. Kolomoiskiy himself has fed rumors that Zelenskiy may do his political bidding by declaring his intention to de-nationalize Privat Bank, which was nationalized under Poroshenko – with the strong support of the international community – after revelations that extensive self-dealing had left a $5 billion financial hole in the bank’s balance sheet. The Trump administration will need to assert a red line with regard to the de-nationalization of Privat Bank, which would be catastrophic for Ukraine’s finances and credibility. Zelenskiy should also know that his treatment of Kolomoiskiy will be watched closely for signs of favoritism.

Ukraine also faces big hurdles in the economic and energy arenas. Ukraine has become the poorest country in Europe, as measured on a per capita basis. A major part of the problem is that Ukraine has attracted very little foreign or domestic investment. Interest rates are exorbitant because over 50 percent of bank loans are non-performing. Although Russia’s war and geopolitical instability contribute to foreign investors’ perception of investment risk, the primary problem is Ukraine’s poor business climate. The keys to improving it are judicial reform; ending the security services’ mandate to prosecute economic crimes; and an end to parliamentary immunity. Many experts believe that Ukraine’s GDP would be growing at 7-8 percent rather than the current 3 percent were it not for investors’ concerns about rule of law.

In the energy sector, Ukraine faces an additional challenge with the expiration of the natural gas contract between Naftohaz and Gazprom on December 31. Due to Russia’s ongoing construction of the Nordstream 2 and Turkstream pipelines in the Baltic and Black seas, respectively, the Kremlin may decide to cease all gas transit through Ukraine entirely once the current contract expires. Currently, the EU and Ukraine are jointly negotiating with Russia to ensure this does not happen, but the Kremlin views this not as a commercial matter but as a geopolitical one. If Moscow believes it can pin the blame on Ukraine, it may stop all Ukrainian gas transit at the start of the new year.

US support is vital to ensuring that Ukraine can resist Russian aggression and subversive measures and emerge as a successful democratic, sovereign, and prosperous state. Ukraine is on the frontlines of the geopolitical conflict between Russian-backed oligarchic authoritarianism and Western democracy. If the Euro Atlantic community allows Russia to pull Ukraine by force into its sphere of oligarchic authoritarian interests, the Kremlin will be emboldened to expand this sphere even further at great cost to Western democracies.

Michael Carpenter is the former US Deputy Assistant Secretary of Defense, Senior Director at the Biden Center, and a Nonresident Senior Fellow at the Atlantic Council.

Editor’s Note: This column is Carpenter’s abridged testimony to the Helsinki Commission on May 9. It has been edited with the author’s permission. The full version is available here.