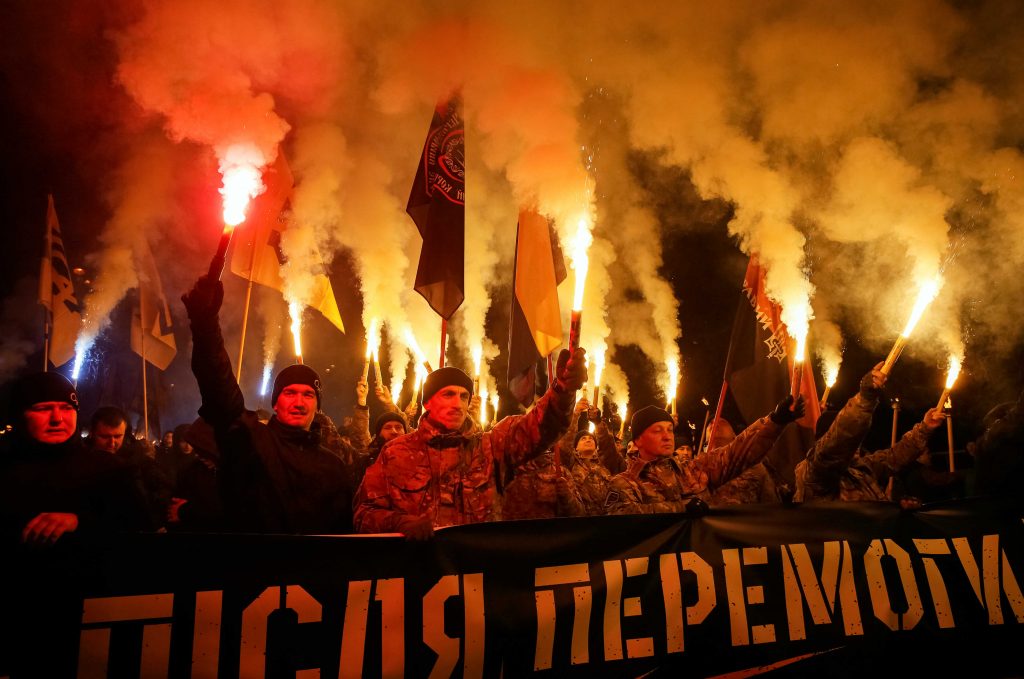 On October 14, the Azov Battalion—Ukraine’s controversial ultranationalist paramilitary group that has been fighting in the Donbas as part of the National Guard—entered the political fray. Registered as a political party under the name National Corps, the new party proposes an ambitious military and nationalist agenda, including a re-nationalization of Ukraine’s private sector and nuclear re-arming. Azov counts some unsavory members among its ranks, including self-proclaimed fascists, but its main front has been the battlefield. In August 2014, Azov’s fighters were reportedly key in helping fend off a major Russian offensive on Mariupol. Ukraine’s President Petro Poroshenko has hailed the battalion for its military prowess. But unlike Azov’s achievements on the battlefield, its time in politics is likely to be very short lived.

Ultranationalist parties have never been popular in Ukraine, and Azov is just another boogieman in a long line of failed ultranationalist groups that have tried their hand at politics. Before Azov, the boogieman and darling of the Kremlin’s propaganda machine was the Right Sector. During the Maidan protests, Right Sector, with which Azov coordinates some of its activities, received a disproportionate amount of media attention (partially due to its prime location on Kyiv’s Independence Square close to international journalists). In reality, Right Sector members, who share some ideological leanings with Azov, were a tiny presence on the Maidan. While leaders of the group boasted membership of more than 10,000, most experts at the time estimated that the number was closer to 300 to 500. Like Azov, Right Sector became a political party in May 2014. Right Sector’s leader, Dmitry Yarosh, ran for president in May 2014 and received less than one percent of the vote. According to polls at the time, 1.7 percent of Ukrainians supported Right Sector. The party did eventually win two seats in parliament (one is Yarosh’s) in October 2014, but they have acted mainly as backbench MPs and refused to join any political faction. Yarosh left the party in 2015. Today, Right Sector has little influence in Ukrainian politics.

Even more “mild” ultranationalists have failed to gain a foothold in Ukrainian politics. Svoboda, the closest Ukrainian version of the populist parties surging in Europe today, is the only such party to enter parliament in Ukraine’s twenty-five years of independence. It did so in 2012, when the party won just over 10 percent of the popular vote. But its support was mainly driven by growing anger at the incumbent Yanukovych government and growing pro-European sentiment in Ukraine (Svoboda, unlike European far-right populists, is a pro-EU party whose supporters tend to be the most pro-European among Ukraine’s political parties). After Ukrainians ousted Yanukovych, the party lost its favorite punching bag and support along with it. By 2014, Svoboda didn’t pass the five percent threshold needed for parliamentary representation. The party’s well-spoken leader, Oleh Tyahnybok, was active on the Maidan along with other political opposition leaders, but his charisma was not enough to sustain the party.

The National Corps, as the latest incarnation of an extremist group going political, is on the same path as those that came before it. Its ideology offers little in terms of realistic policy ideas for solving Ukraine’s many challenges. Its leader, Andriy Biletsky, is new to politics, having won his seat in parliament in October 2014 against a corrupt Yanukovych supporter who ran as an independent. In parliament for two years, he has done little to follow through on his platform of “Strong nation! Honest government! Powerful state!”

Unlike many European countries, where far-right parties have quickly become the norm in politics, Ukraine is different. Ukrainians have had little appetite for extremist groups and radical solutions even as they have sought new political leaders. In the post-Maidan years, new parties such as Self-Reliance have emerged to offer policy solutions rather than empty slogans. Reformers from civil society and journalism have also entered politics seeking to institute long-lasting change. These fledgling pro-democratic forces are still weak in Ukraine, and it is these parties and reformers that need our attention rather than fringe extremists who will be a flash in the pan.

Alina Polyakova, a UkraineAlert contributor, is deputy director of the Dinu Patriciu Eurasia Center and a senior fellow with the Future Europe Initiative at the Atlantic Council. She tweets @alinasphere.