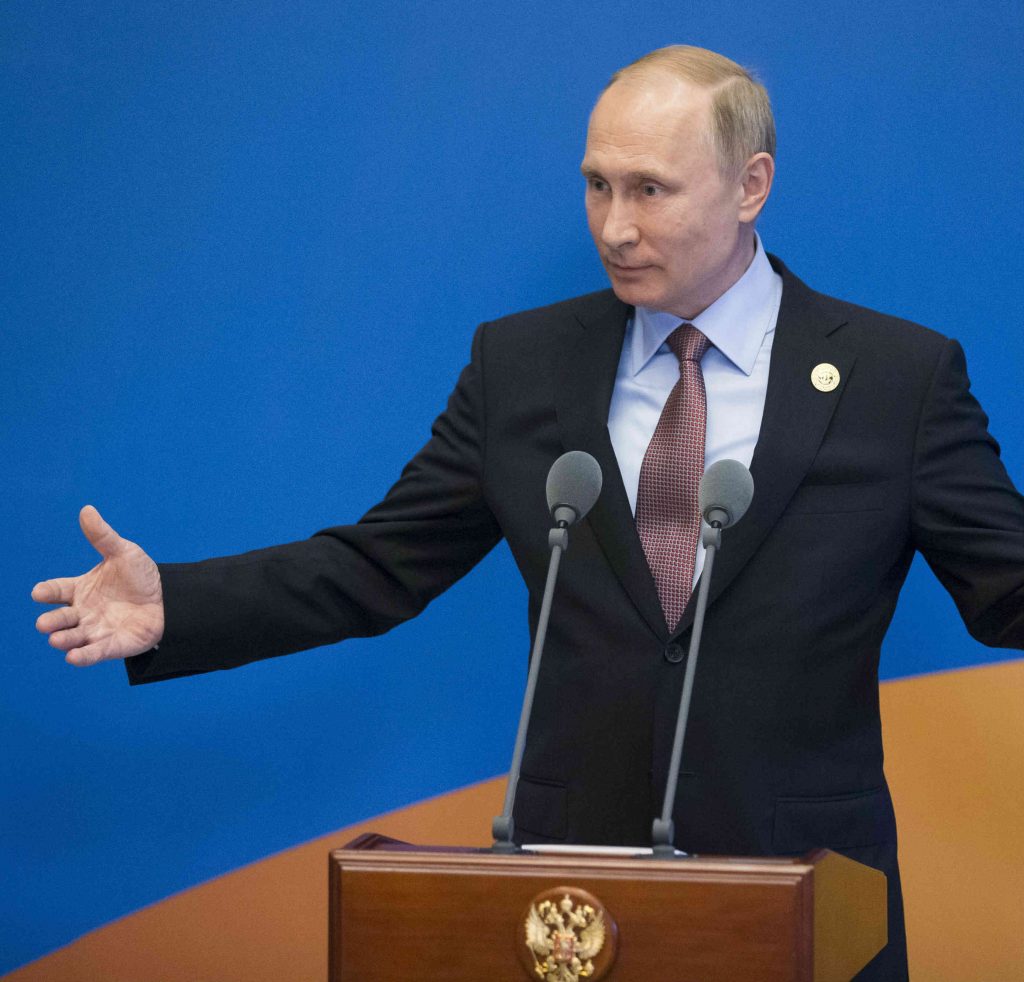 Russian President Vladimir Putin gestures while speaking to the media after the Belt and Road Forum at the China National Convention Center on Yanqi Lake just outside Beijing, China, May 15, 2017. REUTERS/Alexander Zemlianichenko/Pool

Identifying Ukraine’s enemies has become a popular pastime. Unsurprisingly, Russia was the first one to be listed after the Kremlin dropped any pretense of Slavic fraternity and invaded the country. Corruption was next. Whereas Russia was the enemy at the gates, corruption was the enemy within. An eclectic collection of lesser enemies has since joined the list, including everything from burdensome bureaucracy, emigration, and low birth rates to bad roads, nepotism, and international indifference.

However, one ubiquitous and insidious enemy has so far escaped detection. This is the relentless negativity that shrouds Ukrainian perceptions of their own country. Most Ukraine-based expats will recognize this condition all too well from endless depressing conversations with Ukrainian friends and colleagues, who treat displays of outsider optimism as a charming but childish flaw. It is the debilitating practice of always expecting the worst, of finding the thorn on every rose, and the cloud within every silver lining.

The public reaction to Ukraine’s quest for visa-free EU travel is a case in point. At first, the entire notion of visa-free EU access was subject to public ridicule and completely dismissed. At each stage of the process, the mockery continued. Everyone from TV analysts to barroom bigmouths was confident that the whole issue was a sham. Ukrainians were just embarrassing themselves. Nobody wanted them. With Ukraine on the verge of finally enjoying visa-free travel, the lyrics have changed but the tune remains the same. The same crowd is now proclaiming that visa-free access was never even worth having in the first place. So many documents! No guarantees! There is literally no pleasing these people.

Almost every single positive change in Ukraine becomes subject to the same cycle of cynicism and negativity. The ProZorro electronic state procurement system has won international awards, saved millions of dollars, and been replicated by other nations. It deserves praise as an example of Ukrainian excellence and innovation. But most people are more likely to have encountered ProZorro through online conspiracy theories branding it as just another scheme for somebody’s personal enrichment.

The recent Eurovision Song Contest in Ukraine was another success story that failed to lift the proverbial gloom among the majority of Ukrainian commentators. The event was a triumph by almost any standards, with European guests raving about the beauty of Kyiv, the hospitality of their Ukrainian hosts, and the professionalism of the show itself. It challenged negative stereotypes while positioning Ukraine as a quintessentially European nation. However, this positive message has been barely visible throughout the Ukrainian information space. Instead, coverage has focused on alleged corruption, disruptions to daily life, and the brief appearance of a semi-nude streaker on stage during the finale of the song contest. Another opportunity for Ukrainians to feel good about their country has been lost.

This default negativity is not without foundation. In many ways, it is a logical defense mechanism rooted in the bitter lessons of history. Since 1991, Ukraine’s experience of self-government has been profoundly disappointing. Starting from a strong base, the country gradually slipped to the bottom of the post-Soviet class amid institutional corruption of biblical proportions and serial economic failures that have created great wealth for a tiny minority, while leaving the majority of Ukrainians in poverty.

The country’s history prior to independence was even more devastating. Occupied and partitioned for hundreds of years, Ukraine was the epicenter of the totalitarian apocalypse in the first half of the twentieth century, suffering more than any other nation at the hands of Hitler and Stalin. Ten to twenty million Ukrainians were killed between 1917 and 1953, but these staggering crimes remain largely unknown beyond the country’s borders. Ukraine’s historic trauma would be enough to incline anyone toward negative expectations. When combined with the fabled fatalism of Slavic lore, it more than explains the strong undercurrents of negativity in today’s Ukraine.

Nevertheless, it is important to recognize that this negativity serves the function of a self-fulfilling prophecy. Constantly talking down Ukraine’s chances hampers the post-Maidan transformation process in real ways. It makes it much more difficult for reformers to maintain the momentum needed in order to overcome decades of inertia. It consolidates the status quo and strengthens the position of those who advocate resignation in the face of impossible odds. Crucially, it is also a massive turnoff for international investors. I have met numerous delegations of potential investors who have been confused by the gloomy tone they have encountered during visits to Ukraine. While some government and business community representatives have presented them with a balanced overview of progress and challenges, many have painted a picture of unrelenting pessimism. Predictably, this approach does not inspire investor confidence.

The media has also been instrumental. Feel-good stories on Ukrainian TV are rarer than smiles in a Soviet photo album. Instead, viewers are fed a daily diet of poverty, injustice, and misery. The Ukraine depicted on the evening news on virtually every TV channel is a grim and unlovable place that relentlessly reinforces negative stereotypes about the country. Western correspondents visiting Ukraine and those based in Moscow inevitably feed off this, helping to set the tone for the overwhelmingly negative and downbeat coverage of Ukraine in the international media.

How can this depressing cycle be broken? Unlike with its other enemies, Ukraine does not need to wage outright war against negativity. Rose-colored glasses would be of little use in the current climate, and a frank assessment of the country’s shortcomings is essential if the transition envisaged on the Maidan is to be achieved. However, a more nuanced approach to the country’s affairs is long overdue.

Ukraine is certainly an imperfect place. It has experienced one of the world’s most turbulent histories and remains stuck next to arguably the worst neighbor on the planet. Corruption is endemic. People are poor. But it is also a miracle of hope where grassroots activists have built a vibrant and thriving civil society. It is a land where the flame of liberty has survived some of humanity’s darkest chapters, where traditions of hospitality and inclusion have defied centuries of political violence and invasion. Ignoring Ukraine’s problems would be foolish and counterproductive, but overlooking the country’s virtues and achievements is equally shortsighted. Ukrainians have a lot more to be proud of than many appreciate, and they may find that this pride itself can be a stepping-stone to success.