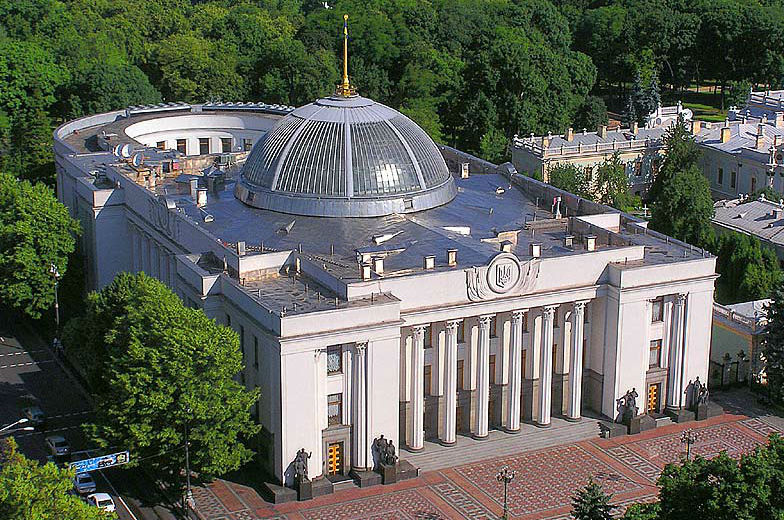 Ukraine holds free and fair elections, but voters have weak influence on government policy and decision making. Even after the Euromaidan, the Verkhovna Rada (pictured) is dominated by oligarchs and often serves their interests rather than the popular will. Credit: Jurij Skoblenko/Creative Commons.

Listen to the proclamations of Ukraine’s political leaders and you might think the country is in the midst of rapid change. On June 4, Ukrainian President Petro Poroshenko declared that “reforms are the key word…The countdown of the period of reforms has started.”

There is much talk of reform, but the reality is less impressive. No one doubts that the country’s institutions desperately need restructuring. Even before Russian forces annexed Crimea and invaded the Donbas, the country stood on the brink of bankruptcy. After a painful currency devaluation, it is now the poorest in Europe. It is also the most corrupt. The parliament is controlled by oligarchs, and the police are as crooked as the mafia.

Poroshenko’s government has taken four steps to improve the country’s governance. First, Ukraine’s leaders are finally bringing talented people into government, including many from the private sector and abroad, who are less likely to participate in corruption rackets.

Second, the government has started to clean up the energy industry. For years, oligarchs and criminal bands siphoned billions of dollars from the state budget by taking advantage of a corrupt subsidy system. The government is now hiking prices, reducing the subsidy and the scope for theft.

Third, the National Bank of Ukraine is restructuring the country’s banking system, reducing the scope for money laundering and implementing tough legislation forcing every bank to declare its ultimate owner.

Fourth, the government is grappling with its persistent budget deficit and runaway debt. This will bring down runaway inflation that has devastated those living on fixed incomes.

But are Reforms Sustainable?

The outlook for continued reforms is mixed. Ukrainians have few levers of power over their government. Officials know this, so they make little effort to act in the public interest.

Some change is possible, even with the current system. The last year has been exceptional for two reasons. First, the incredible wave of civil society action that drove the Euromaidan placed immense pressure on bureaucrats and politicians to shape up. Second, the influence of Ukraine’s foreign donors has spurred reforms. The International Monetary Fund, for example, disburses funds only in exchange for cuts to the gas subsidies that have fueled oligarchs. European countries are involved in an array of technical-assistance and civil society projects. The US government has put political pressure on the oligarchs to behave. Just as Ukrainian society exerted unprecedented pressure on the government from below, foreign donors pushed for complementary changes from the top. This double squeeze has scored real successes. But Ukraine needs a means of guaranteeing good governance that is sustainable. There is a growing gap between the changes people expect and the reality that much of the old system remains in place.

If Ukraine is to cut corruption, improve the effectiveness of its bureaucracy, and become a modern European state, it needs to finally establish an effective democracy. The country now holds free and fair elections, but voters have weak influence on government policy and decision making. Even after the Euromaidan, parliament is dominated by oligarchs and often serves their interests rather than the popular will.

Many of the country’s most powerful figures have neither served in parliament, nor in government. The oligarchs—most of whom accumulated their wealth by stealing from the state—consolidated power in different regions and bought representation in central government. The main oligarchs are Rinat Akhmetov, Ukraine’s richest man, whose powerbase is the Donbas region; Ihor Kolomoyskyi, a vehemently anti-Russian businessman from Dnipropetrovsk; and gas tycoon Dmytro Firtash. Poroshenko is also a rich entrepreneur—but unlike other oligarchs, most of the power he wields stems from his elected office.

Until the power of the oligarchs is curbed—until they are stripped of their TV channels, dispossessed of their voting blocs in parliament, and forced to obey the law—Ukrainians will struggle to exercise control over the government. Elections have only a loose effect on government policy because oligarchs buy representatives in many political parties. The process of buying members of parliament is sufficiently transparent that it is discussed openly in the Ukrainian press. A recent analysis by Novoye Vremya journalist Kristina Berdynskykh found that Firtash has representatives in four different parties, while Kolomoyskyi has proxies in five.

In the short run, the only hope for reform is to continue the ‘double squeeze’ on Ukrainian officialdom, coordinating the demands of civil society and foreign donors to improve governance and cut graft. But Ukrainians and their friends abroad need a long-term strategy for holding government to account.

In functional democracies, political parties are subject to regular elections ensuring they remain responsive to voters. But Ukraine’s political parties don’t work that way. They lack coherent ideologies, often exist for only a short period of time, and are little more than vehicles for oligarchs. Voters lack real choice. Until Ukraine establishes real political parties, voters will lack the means to force their government to reform.

Chris Miller is the Associate Director of the Program in Grand Strategy at Yale University and a fellow at the Foreign Policy Research Institute. A longer version of this essay is available here.