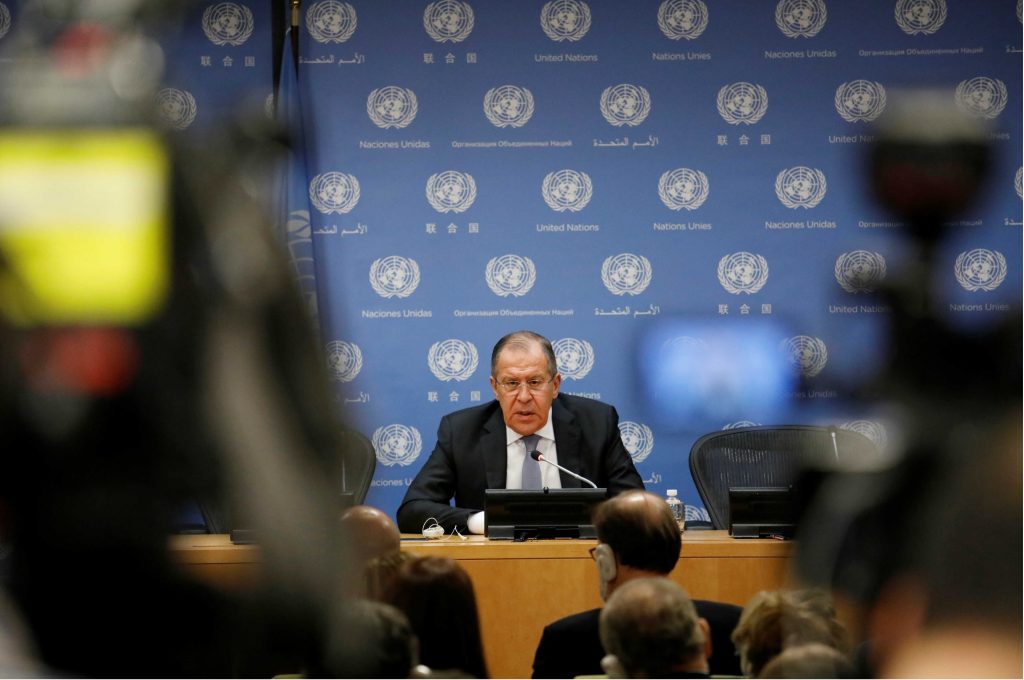 Russia’s disinformation activities have reached a new level: the government is now attempting to reinterpret international law. And the international community appears to be largely ignoring these audacious, unlawful efforts.

The latest effort began on January 14 when the first deputy chairman of the State Duma Committee for CIS Affairs, Konstantin Zatulin, acknowledged that Russia had violated its treaty of friendship with Ukraine. He then called for a cancellation of the treaty. “All the issues need to be addressed again, including those with regard to the borders,” said the parliamentarian.

Russian Foreign Minister Sergei Lavrov gave Zatulin’s comments short shrift. “Yes, international legal documents matter, but this has to be dealt [with] by law experts. Politically, I believe that we continue to respect the territorial integrity of Ukraine within the boundaries redrawn after the referendum in Crimea, the reunification of Crimea with the Russian Federation,” the foreign minister said.

Lavrov’s statement—that Ukraine’s “new” borders are the ones established by Russia after its 2014 invasion of Ukraine—defies logic. Russia cannot continue to claim it respected Ukrainian territory after seizing portions of it by force. Attempting to reset the situation after conquest is a direct contradiction of Article 2 of the UN Charter: “All members shall refrain in their international relations from the threat or use of force against the territorial integrity or political independence of any state, or in other manner inconsistent with the purposes of the United Nations.”

Lavrov has also attempted to create a new standard for the implementation of international agreements. When asked if Russia had violated the 1994 Budapest Memorandum guaranteeing the territorial integrity of Ukraine, he reinterpreted the meaning of the agreements. “We answered these questions many times, including on the 1994 Budapest Memorandum, according to which Ukraine renounced nuclear weapons, and Russia pledged not to use nuclear weapons.”

Another time, he said, “The Budapest Memorandum contains one single legal obligation regarding Russia, the US, and the UK—it stipulates that no force with the use of nuclear weapons will be applied to Ukraine. It is the only legal obligation of 1994.” Lavrov ignored the text of the agreement, in which Russia agreed to refrain from the threat or use of all force against Ukraine.

In 2016, Lavrov tried to state that international agreements were between governments rather than states. Since the government of Ukraine was different in 1994, he reasoned, the agreement was no longer binding. But as former US Ambassador Steven Pifer has noted, that would mean that after every change of government, all treaties would have to be renegotiated—an absurd proposition inconsistent with international law.

Not content with his attempts to reinterpret an international agreement, Lavrov went further. Trying to establish the principle that statements outside of the agreed-upon text held legal validity, he blamed the victim of aggression with violating the Budapest agreement. At a January 15 press conference, Lavrov alleged that the Ukrainian government had issued a separate statement in 1994 that it would not encourage “racist, neo-Nazi, xenophobic tendencies.” He then charged the Maidan movement with those very actions. “Having undermined the agreements of February 20, 2014, being unable to fulfill the commitment to form a national unity government under the guarantee of France, Poland, and Germany, the Ukrainian coup plotters grossly violated the provision of the Budapest Protocol on the need to faithfully respect the sovereignty and territorial integrity of the Ukrainian state,” he fulminated.

It goes without saying that Russia cannot take statements—true or untrue, fulfilled or unfulfilled—that were not included in an agreement and somehow make them part of the agreement without the approval of the other signatories. It also cannot be the cause of disunity and then blame the government for the results. The Budapest Memorandum discusses the “independence, sovereignty, and the existing borders” of Ukraine, not the formation of a government within those borders. Russia’s insistence that the Ukrainian government meet its specifications is another violation of Article 2 of the UN charter, which acknowledges the sovereign equality of all its members.

Perhaps it’s not surprising, however. In its disinformation campaigns around the world, Russia has shown a willingness to repeat falsehoods so many times that they are eventually believed by many. It appears that Lavrov is simply aiming for the same result on the international stage. But the West must not allow that to occur, and should boldly highlight these attempts before the United Nations and in the eyes of the world community.

James J. Coyle is author of “Russia’s Border Wars and Frozen Conflicts” and is a non-resident research fellow at the Atlantic Council.