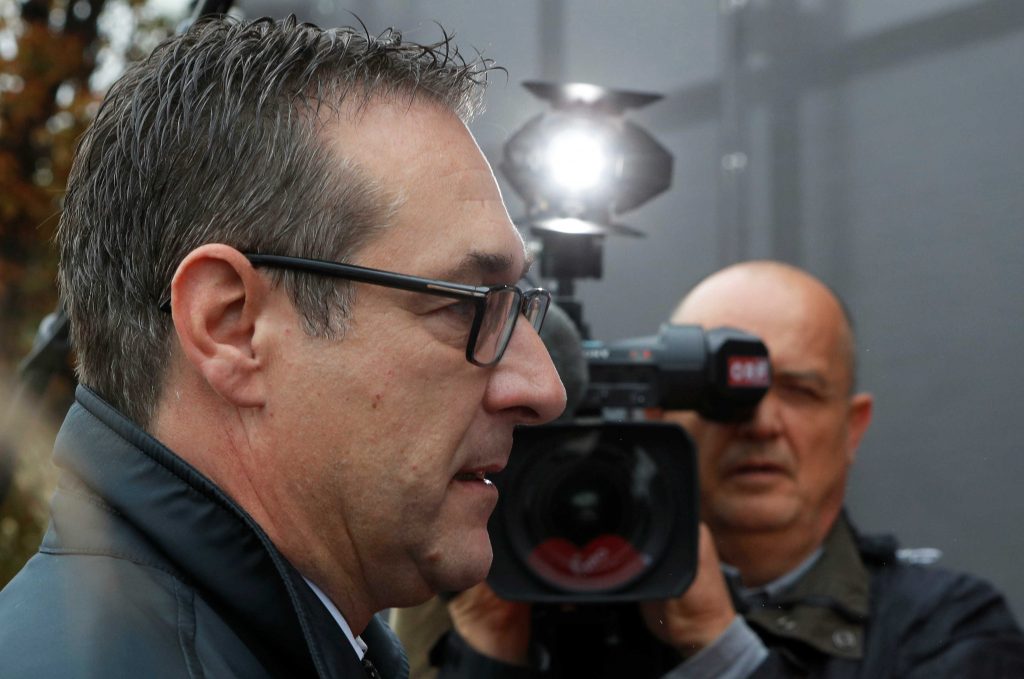 The far-right Austrian Freedom Party will likely become part of the next Austrian federal government following the October 15 parliamentary elections. For the first time since the introduction of sanctions on Russia in 2014, a member of a vehemently pro-Russian and anti-sanctions party would become a governmental force. Will this mean the end of the sanctions regime?

Foreign Minister Sebastian Kurz has been tasked with forming a new government. The most likely scenario is that Kurz’s center-right Austrian People’s Party (ÖVP) will team up for a coalition government with the far-right Austrian Freedom Party (FPÖ). The latter is infamous for its pro-Kremlin stance.

The party not only legitimizes the annexation of Crimea verbally, but it sent high-ranking officials to observe the Crimean “referendum.” In 2014, the entire party leadership visited Moscow. The largest delegation, including party president Heinz-Christian Strache, his deputy Norbert Hofer, and MEP Harald Vilimsky, went there in December 2016 to sign a five-year “cooperation and coordination agreement” with Russian President Vladimir Putin’s United Russia party—which is an unprecedented high-level and important agreement with a European party—even if it is more symbolic than substantial in nature.

But FPÖ’s political connections to Russia reach well beyond Moscow. Johann Gudenus, vice-mayor of Vienna, and MP Johannes Hübner, a lawyer and FPÖ’s speaker on foreign policy issues, met with Chechen dictator and Putin appointee Ramzan Kadyrov in Grozny in 2012. After the meeting, Gudenus said he was “convinced that there is no political repression from Kadyrov against opposition members.” This is an absurd statement in light of the documented human rights abuses, including killing and torture, of opposition figures in Chechnya—something most Austrians are well aware of, given that it resulted in a wave of Chechens seeking asylum in Austria starting in 2007. At home, Gudenus has called for the deportation of Chechen asylum seekers. At the same time, Gudenus and his party comrade Barbara Kappel have extensive personal business ties with Russia.

Not surprisingly, the party is calling for the immediate abolition of sanctions, and has been doing so on a near-weekly basis since their implementation.

As we predicted in our recent paper (co-authored by Jakub Janda of European Values) on the Kremlin’s election meddling possibilities in Central and Eastern Europe, there was no systematic meddling by Russia in the Austrian elections. The FPÖ has been doing well in the polls for years, and Russia might have been reluctant to put its good relations with the Austrian political mainstream at risk with aggressive interference. The FPÖ does not owe its success—26 percent of the vote, up 5.5 percentage points from 2013—to Moscow.

But the real question is, how much change could the FPÖ, once in government, effect on Austria’s foreign policy? Its leaders have repeatedly emphasized their desire to not compromise their platform for the sake of government participation like they did in 2000 and 2002. Foreign policy has never been an important factor in the FPÖ’s electoral success and, since the era of Jörg Haider (party chairman from 1986 through 2000), it has always taken a backseat to the party’s anti-immigration agenda. Consequently, its core demand for coalition talks, voiced repeatedly over the last few weeks, is to lead the ministry of the interior. However, Norbert Hofer has been mentioned by Strache as a candidate for the post of foreign minister. While it is highly unlikely that the FPÖ could actually secure this office (both Kurz and federal president Alexander van der Bellen are reportedly heavily opposed to handing the foreign ministry over to them), the FPÖ will certainly not back down from its anti-sanctions stance once in government.

Neither of the parties of the center, conservatives, and social democrats, can be expected to counteract these efforts, given that they have also proposed a slow dismantling of the sanctions’ regime, citing pragmatic economic and foreign policy reasons. The ÖVP in particular, traditionally under heavy influence from business circles, could turn Austria into a leader of inner-EU opposition against the sanctions when paired with the FPÖ.

Therefore, even if the FPÖ will not appoint the next foreign minister, its participation in the federal government would most certainly shift Austrian politics to an even more pro-Kremlin and sanctions-critical “neutral” position. And this position has its supporters in Eastern Europe. Both ÖVP and the Freedom Party are “flirting” with the Visegrad-Group. In their last televised debate, it seemed as if Kurz and Strache were competing over who is a bigger fan of Viktor Orbán, the prime minister of Hungary known for his pro-Russian stance.

He’s not the only one; Czech President Milos Zeman is another “Putinversteher.” Robert Fico of Slovakia is a critic of sanctions, as are the leaders of several Southern member states, such as Greece, Cyprus, Italy, and Spain.

Germany’s EU leadership on both the refugee issue and sanctions can also be challenged: while many in the ÖVP are still loyal to German Chancellor Angela Merkel, Kurz—who was granted full authority in programmatic and personal matters as a precondition for his acceptance of the party chairmanship in May 2017—is definitely not one of them, and Strache is openly agitating against her.

While one swallow does not make a summer, a group of swallows often does. The new Austrian government will not necessarily push for a quick and instant change in European policies toward Russia, but Strache can definitely strengthen the club of sanctions critics in Europe. Unfortunately, the diplomatic distance between the EU and the United States has grown significantly since the election of Donald Trump, and the US’s role in maintaining EU support for sanctions has diminished. As voices to abolish sanctions against Russia grow louder within the EU—despite systematic and frequent violations of the Minsk agreement by the Russian side—the supporters of sanctions must redouble their efforts in the coming period if they want to keep the fragile consensus intact.

Péter Krekó is director of the Budapest-based Political Capital Institute, Fabian Schmid is an investigative journalist at Der Standard, Bernhard Weidinger is an analyst at Documentation Centre of Austrian Resistance in Vienna, and Lóránt Győri is a political analyst at Political Capital.