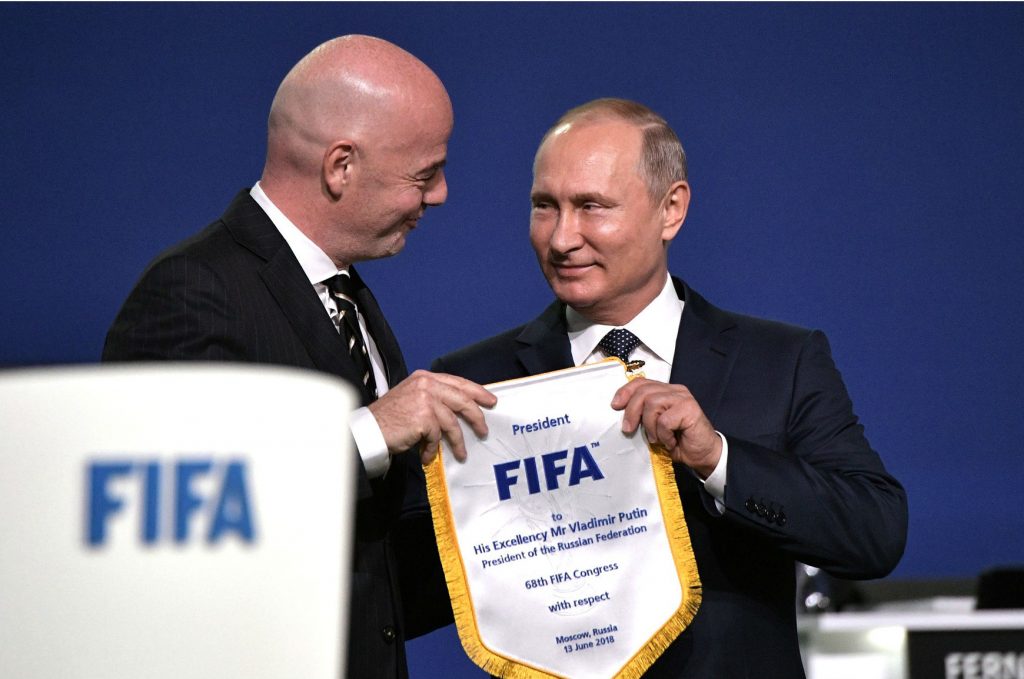 Back in 2010 when world football governing body FIFA awarded Russia the right to host this year’s World Cup finals, few viewed Moscow as a threat. At the time, President Dmitry Medvedev seemed eager to portray himself as a Western-friendly reformer. In the diplomatic arena, the reset with the Obama White House had yet to unravel and it would be a further two years before US presidential candidate Mitt Romney would face ridicule for daring to call Russia America’s number one geopolitical foe. The 2007 cyber-attack on Estonia and the 2008 war in Georgia had certainly set some alarm bells ringing, but most still regarded talk of a new Cold War as absurd.

That is emphatically no longer the case. Few would doubt that Russia and the Western world are engaged in the most intense geopolitical struggle since the collapse of the Soviet Union. Perhaps even more remarkably, Russia appears to be winning. For the past four years, Western leaders have repeatedly found themselves outmaneuvered by the sheer audacity of the Kremlin. Russia has managed to retain the initiative as it has invaded Ukraine, thrown its weight behind Assad in Syria, wrought havoc in cyberspace, and revolutionized our understanding of information warfare. No election is complete without an investigation into Russian meddling, while Kremlin trolls have become so ubiquitous that numerous websites have chosen to remove their comment sections altogether.

The Kremlin’s hybrid war poses fundamental challenges to the idea of a rules-based international order, but the West is still unsure of how best to respond. The nerve agent attack in the United Kingdom earlier this year provoked a robust collective response that saw numerous Western nations expel Russian diplomats, but there are also signs that many in the international community are losing their appetite for confrontation with the Kremlin. In recent days, we have seen US President Donald Trump speak repeatedly of welcoming Russia back into G-8. Elsewhere, European Commission President Jean-Claude Juncker calls for an end to “Russia-bashing,” Germany ploughs on with its Russian pipeline partnership, and French President Emmanuel Macron strikes billion dollar deals in St. Petersburg.

Meanwhile, the 2018 World Cup goes ahead with barely a murmur. Whereas dozens of countries responded to the Soviet invasion of Afghanistan by refusing to participate in the 1980 Moscow Olympics, not a single nation has seriously debated boycotting this summer’s flagship FIFA tournament in Russia. Instead, any protests have been limited to the essentially empty gesture of diplomatic boycotts, as if the absence of dignitaries in the stands will detract from the spectacle itself. This limp reaction is a gold-plated gift to the Kremlin. Indeed, it is hard to overestimate just how big a propaganda coup the absence of any international boycott is for Putin. It validates his confrontational policies and legitimizes his entire regime while making a complete mockery of efforts to isolate Russia internationally. After all, what kind of pariah gets to host the greatest sporting event on the planet?

This normalization of Russia comes at a time when the country continues to occupy large swathes of neighboring Ukraine. The legitimacy provided by the World Cup could now help to convince Moscow that it can risk opening a fresh chapter in the four-year-old conflict that the world has forgotten. Indeed, the absence of any credible boycott movement in the run-up to the World Cup reflects the fact that to many observers, the war in Ukraine has already become the new normal.

This is particularly alarming given that there is little to suggest Russia is ready to retreat any time soon. On the contrary, the Kremlin continues to lay the groundwork for long-term military operations against Ukraine. Since 2014, Moscow has built a series of permanent army bases along the Ukrainian border while redeploying entire army groups to the region and reconstructing railway lines to provide easy logistical support for invasion forces. At sea, Russia is cranking up the pressure close to Ukraine’s vulnerable Azov Sea coastline. Moscow is also pursuing various pipeline projects that will bypass Ukraine, making it theoretically possible to wage a major land war without disrupting vital energy supplies to European markets. On the domestic front, the Kremlin-controlled media remains relentless in its Ukraine-bashing. Russia’s entire posture is that of a power unwilling to accept the loss of Ukraine and patiently waiting for the right moment to decide the matter militarily.

One of the key arguments preventing the Kremlin from expanding its invasion of Ukraine has always been the likelihood of an overwhelming international response. The scale of the diplomatic opposition Russia encountered following the seizure of Crimea and the outbreak of war in the Donbas came as an unpleasant surprise to many in Moscow, who had expected the West to follow the pattern established during the 2008 invasion of Georgia and seek a rapid return to “business as usual.”

However, with the world now seemingly conditioned to accepting the regrettable reality of a Russian military presence in Ukraine, a far larger geopolitical gamble no longer looks out of the question. If the West is prepared to send its football teams to Moscow while Russian tanks fire on Ukrainian positions just across the border, Western leaders may find it difficult to convince their electorates that a further escalation in the ongoing conflict warrants any dramatic sacrifices on their part.

For the Ukrainians themselves, this lends the World Cup an understandably ominous aspect. Russia’s war in Ukraine began as the curtain fell on Putin’s last great sporting triumph, the 2014 Sochi Winter Olympics. Many in Kyiv will now be watching anxiously as the 2018 World Cup progresses, wondering whether history will repeat itself once the final whistle blows.