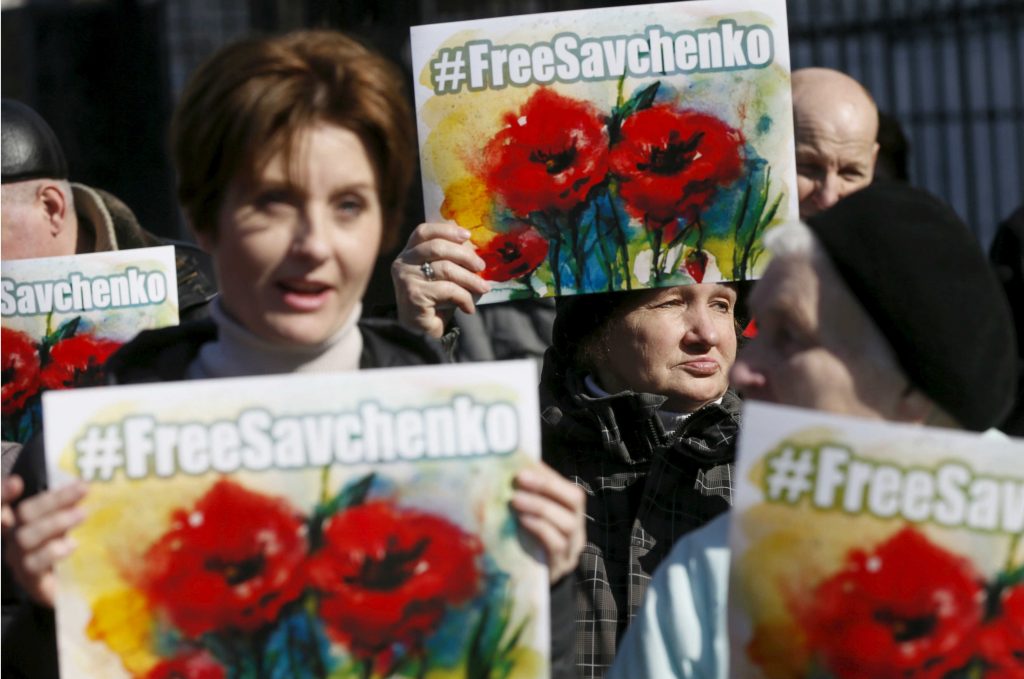 “Freedom does not have a price! I don’t believe anyone in Russia! I’m not afraid and I will not beg!”

These may be some of the last words that Nadiya Savchenko, Ukraine’s most famous political prisoner held by Russia, will speak. On March 3, the day her trial was scheduled to end and she was denied an opportunity to make a closing statement, Savchenko declared a hunger strike, refusing to take even water. According to her lawyer Nikolay Polozov, her decision is irrevocable.

Savchenko says she will break that promise only when she is returned to Ukraine, “dead or alive.” She has forbidden any medical intervention to break her strike and in the event of her death, demands that no autopsy be conducted in Russia and that she be brought back to Ukraine immediately.

Russian jurisprudence however, will not allow Savchenko even this last bit of freedom. “The Russian criminal procedural code does not entitle prisoners on hunger strike the right to die,” Savchenko’s lead defense lawyer Mark Feygin said. “Despite her instructions against any medical intervention, Nadiya will not be allowed to carry out this hunger strike. Judging from what I have heard from the prison authorities, they are already preparing for this,” Feygin said in an interview to a Ukrainian news agency.

Savchenko’s trial was due to end March 3. The prosecutor asked for a 23-year prison sentence and a fine of 100,000 rubles (approximately $1,400). Savchenko’s team announced that it will not appeal the verdict. “Shame on us that Savchenko doesn’t want to appeal because there is no such thing as a just court in Russia,” Feygin tweeted.

The fighter pilot is charged with the murder of two Russian journalists who were killed in June 2014 during a battle between Russian-backed separatists and Ukrainian armed forces. Savchenko denies the charge, and her defense team has provided telephone records that show she was already captured by separatists at the time the journalists were killed.

Since her capture and imprisonment in Russia, Savchenko has become Ukraine’s most famous woman. Former Prime Minister Yulia Tymoshenko’s Batkivshchyna party put Savchenko on top of their party list in the 2014 parliamentary elections and she is now a member of parliament. She is also a member of Ukraine’s delegation to the Parliamentary Assembly of the Council of Europe and has international immunity. Countless European leaders have called for her release, among them the President of the Council of Europe.

While Savchenko has refused to be a bargaining chip in Russian-Ukrainian relations, her release, if it comes, will most likely be the result of a bargain.

For weeks there has been much speculation about a possible swap of Savchenko for Russian military intelligence officers Alexander Aleksandrov and Yevgeniy Yerofeyev, who were captured by the Ukrainian military in May 2014. Wounded when captured, they initially admitted to being Russian officers but later denied these admissions.

The two are currently on trial in Kyiv, charged with waging war against Ukraine, trafficking weapons, and promoting terrorism. The charges carry a possible life sentence.

Aleksandrov’s and Yerofeyev’s trials are scheduled to end on March 9, the same day that Savchenko’s trial will also finally come to an end. (Editor’s note: Savchenko gave her final speech on March 9; her sentence will be handed down March 22-23.)

Feygin has always maintained that Savchenko’s case is political and not legal, and that the helicopter pilot’s fate would ultimately be decided in the Kremlin and not in some Russian backwater courtroom. He believes the Kremlin is waiting for the Alexandrov and Yerofeyev trials to end at which point Ukraine and Russia will have a reason for an exchange: both trials are finished, the defendants have been sentenced, and therefore they can be transferred to carry out those sentences in their home countries.

Savchenko, weakened from a hunger strike that she began in December 2015, is even frailer since she stopped taking liquids March 3.

On March 7, two Ukrainian consular officers visited Savchenko. They found her weak but alert. “Her heartbeat is very rapid and her hands cold,” they reported. Savchenko told them that she was determined to last until March 9 so she could have her final say in court. She passed on a note to the public which the Ukrainian media circulated widely. “I’m going to leave prison on my terms” she wrote, “alive or dead, I’ve already won!”

Irena Chalupa is a nonresident fellow at the Atlantic Council and a Fulbright Scholar in Ukraine for the 2015-2016 academic year.