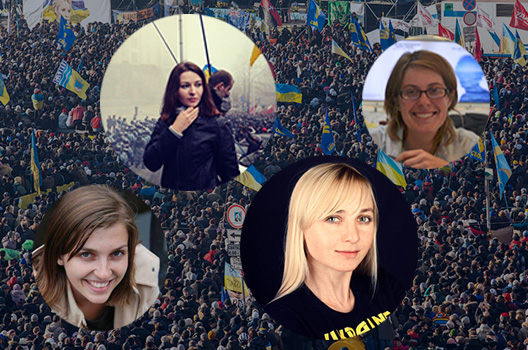 As Kateryna Kruk walked among her fellow protesters in Kyiv’s central square while checking her phone during the early days of the Euromaidan in December 2013, she noticed an opportunity: Ukrainians shared news of the revolution almost entirely in Ukrainian or Russian. Inspired by the use of social media during the Arab Spring, Kruk started tweeting in English. Within a few days, Kruk had thousands of foreign followers on Twitter, and she became a de facto spokeswoman and go-to source for Western journalists and politicians.

Kruk, 24, is emblematic of a group of Ukrainian women activists who played key roles during the protests and then joined the post-Maidan reform movement in an effort to turn the ideals of Ukraine’s Revolution of Dignity into concrete political and economic changes. Along the way, they have experienced many of the same emotions—optimism, excitement, and even fear—and all vividly remember the first time they realized the protests on Maidan had changed their worlds.

For Kruk, this moment occurred on November 24, 2013, when Berkut first used tear gas against peaceful demonstrators. Kruk was at the top of a fence overlooking the Cabinet of Ministers when tear gas wafted over the square. Clutching her grey scarf to her nose, she managed to climb down and escape along with other protesters. “I realized this was serious, that now the state had turned against its own people,” she said. Kruk went on to survive Berkut’s massacre of protesters on February 20, 2014, as well as numerous death threats—all the while providing blow-by-blow updates on Twitter.

Oleksandra Ustinova, 30, also remembers the first Berkut attack. “It was at night, and it was the first time in my adult life when I cried because I was scared. Not to be beaten but to be in jail for years,” Ustinova said.

Like Kruk, Ustinova understood the importance of storytelling. She realized that Russian propaganda was affecting the West’s perceptions of the Maidan, and something had to be done. Ustinova, who was working in public relations for eBay Ukraine at the time, reached out to Dutch friends in the television industry and helped them livestream the protests. Then she became a fixer for other journalists and never took off her bulletproof vest. “After the first raw protests, we picked up the bodies from the morgue and I knew that my life outlook will never be the same,” she said.

While Kruk and Ustinova worked to share the real story of Maidan with the West, Olena Halushka used her job with Rada Deputy Lesia Orobets to help protesters. Halushka and Orobets tracked down missing and wounded activists, bailing them out of jail or protecting them from being arrested while they recovered in hospitals. Halushka, 27, remembers the moment when she realized no compromise with the Yanukovych regime was possible. “Close friends of my friends were murdered by security police,” Halushka said. “Before I thought the Maidan might fizzle out, but at that moment I realized it was irreversible, and there was no turning back.”

While the Maidan was a heady victory, once ex-President Viktor Yanukovych fled to Russia, these activists faced the same question everyone else did: How to translate the revolution into concrete change.

EuroMaidan Press founder Alya Shandra, 31, grappled with this exact problem. EuroMaidan Press (formerly known as EuromaidanPR) was initially a way to engage volunteers who knew foreign languages, assist foreign correspondents, and keep the general public informed about developments in Ukraine from the view of protesters in the square.

“Afterwards though we faced the challenge of transitioning from a grassroots volunteer initiative to something more professional,” Shandra said.

Kruk meanwhile struggled with squaring what she saw in her new job at the Ministry of Agriculture with the ideals of the revolution. While she enjoyed participating in negotiations on the agricultural part of the European Union-Ukraine Deep and Comprehensive Free Trade Agreement, she was uncomfortable with the continued corruption all around. According to Kruk, three businessmen from the eastern Ukrainian city of Slavyansk met with a senior ministry official in July 2014 to request help rebuilding their city after Ukrainian forces recaptured it from Russian-supported rebels.

“The ministry official openly solicited a bribe from them,” Kruk said. “It was like nothing had changed and I decided I didn’t want to be involved in this anymore.”

Kruk quit and co-founded the online NGO Global Ukraine, which connects Ukrainian diaspora with their home country. There she focuses on encouraging the diaspora to support Ukraine’s ongoing reforms and to invest.

“Maybe we underestimated how long it would take to change society. It will take at least ten years and maybe a generation to fully remove the old way of doing business,” Kruk predicted. “But there is no turning back, and eventually I am certain Ukraine will succeed and join the European Union.”

While Kruk struggled, Halushka found herself balancing two jobs. After the revolution, Haluska was elected to the Kyiv City Council, where—despite no previous background on the subject—she played a lead role in addressing citizens’ complaints caused by a sharp rise in utility tariffs. Halushka started an educational project to explain how natural monopolies and municipal institutions work, and how Kyiv’s citizens can protect their rights as consumers.

“The housing sector of Kyiv is very favorable for corruption because there is no metering of citizens’ utility usage,” Halushka said. “That’s why we launched the process of installing heat meters in Kyiv. I also forced the utility companies to provide high-quality services for the money they receive from consumers.”

At the beginning of 2015, Halushka accepted a job as international relations manager at Reanimation Package of Reforms (RPR), a platform of several hundred reform experts from forty-eight civil society organizations, think tanks, and analytical centers. After a year of balancing both jobs, Halushka decided not to run for reelection, and she now works full-time at RPR.

Halushka also confronted the gap between high expectations and reality, noting that “maybe we were too optimistic right after the Maidan. The reanimation of the country has been going on for two years already, and there is still no end in sight!” Halushka remains optimistic that reformers will succeed and emphasizes the need for conditionality. Western donors must continue to demand reforms in exchange for aid.

While Halushka balanced two jobs, Ustinova wrestled with whether to move from a well-paid job in business with lots of professional opportunities to the low-paid civil society sector. Ukraine was also in the middle of a financial crisis. “I decided that this is the time of life in Ukraine when we have an opportunity to create a new country,” and she made the jump.

Ustinova now holds dual roles with the health reform NGO Patients of Ukraine and civil society organization Anti-Corruption Action Center (AntAC). She manages AntAC’s project on anticorruption in healthcare, and played a key role in passing a law that forced the Ministry of Health to outsource all medicine procurement to international organizations including UNICEF, the United Nations Development Program, and Crown Agents. This new program will save thousands of lives and approximately $100 million each year. Ustinova points to this victory over Ukraine’s “pharma mafia” as proof that the country can change, adding that “the old guard is more scared since they know how far Ukrainians will go for the future of the country and even die for it.”

The struggle to change Ukraine is ongoing, and while the ultimate outcome remains uncertain, one thing is certain: the women of the Euromaidan will remain in the forefront of the fight.