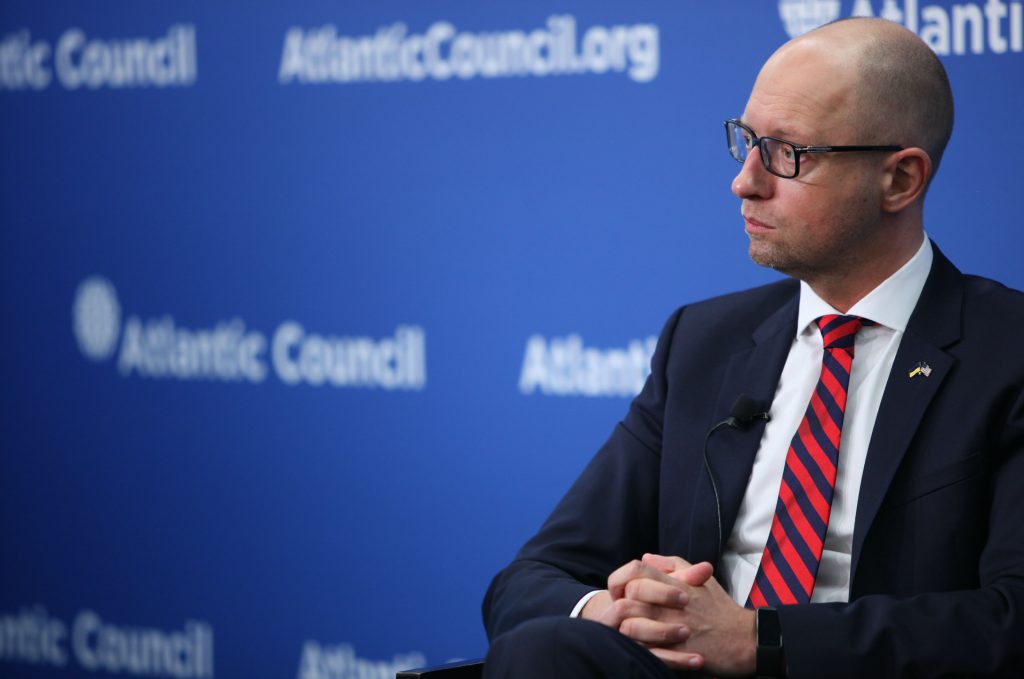 “I’m not worried [about Brexit]. I’m scared,” said Arseniy Yatsenyuk at the Atlantic Council on June 30. In one of his first public appearances in Washington since stepping down as Ukraine’s prime minister on April 14, Yatsenyuk urged Europe to get its act together. Brexit, he said, is a “huge geopolitical crisis”: the United Kingdom’s exit from the EU could split the union, weaken Europe, trigger a domino effect, and undermine trust and confidence in the European idea among Ukrainians. “We need a united Europe,” he said.

Like other reformers, Yatsenyuk is counting on Ukrainians’ strong desire to join Europe as a means to incentivize continued legislative reform and clean up the country.

Ukraine has another stake in the EU game, as well, Yatsenyuk pointed out. The EU will extend its punishing sanctions on Russia, although there are early indications that it may not renew them when they expire in January 2017.

“Mr. President [Barack Obama] and the EU leaders, you aren’t allowed to lift sanctions against Russia until Russia fully implements Minsk [ceasefire agreement]. And until Ukraine takes over control of Luhansk, Donetsk, and Crimea. Full stop,” Yatsenyuk said. “We are not just fighting for our borders….We are fighting for European borders, and for NATO member states’ borders, too. And for peace and stability in Europe.”

After speaking extemporaneously from the podium for ten minutes, Yatsenyuk took questions from the audience for fifty minutes. His charisma and charm were matched by an intense delivery style and numerous facts.

He laid out his successes as prime minister between February 2014 and April 2016, noting that his government faced tremendous challenges. On his watch, Ukraine got its finances under control, cleaned up its corrupt energy sector and took meaningful steps toward energy independence, established new anticorruption bodies, and reformed the patrol police—all while holding the Russians at bay.

“We deterred Russian forces….We built up a new army. We are the only country in Europe which is fighting against a well-equipped, armed-to-the-teeth Russian army,” he noted.

The former prime minister did not shy away from Ukraine’s notorious corruption problem. “It’s true that corruption exists….We did a lot to decrease the level of corruption,” Yatsenyuk said, outlining his government’s actions in that area.

The government made an effort to reduce the power of oligarchs, he claimed, including Dmytro Firtash, Rinat Akhmetov, and Ihor Kolomoisky. Critics will be quick to point out, however, that these efforts were mere slaps on the wrist; all of the men maintain a strong influence in Ukraine’s parliament, and Ukraine’s media is still owned by oligarchs.

He explained that new anticorruption bodies have been established and have begun investigations into top-level officials. However, no high-level officials from the Yanukovych regime or any since the Euromaidan have been prosecuted.

Prosecutor General Viktor Shokin—who was reviled by Ukraine’s reformers—was recently replaced by Yuriy Lutsenko, who plans to establish an inspector general’s office within the office. Lutsenko was initially criticized for being too loyal to Poroshenko and for lacking a law degree, but Yatsenyuk said, “I have full trust in him. He wants to deliver.”

He also praised the sweeping judicial reforms that parliament passed in early June. Sensibly noting that “you can’t win the fight against corruption having corrupt judges,” he pointed out that Ukraine has started vetting judges. Only about 250 of the country’s 7,600 judges have been vetted yet, so much remains to be done.

Parliament also passed a law that forces officials to disclose their assets, the so-called e-declaration. Yatsenyuk described the document as forty pages long and “much tougher than [similar requirements] in the United States.”

Civil service reform “that resembles the Polish experience” was another step forward. However, he admitted, public sector workers earn extremely low wages and bribes are the only way for many people to feed their families. To solve this, Yatsenyuk has asked donors for a top-up fund to increase salaries in the transition period. “To attract smart, effective folks, you need to pay them,” he said.

He also urged better European cooperation with Ukraine’s anticorruption investigators. Ukraine launched an investigation into the misdeeds of two officials last year and received no response from the Europeans for a year.

But Yatsenyuk wasn’t forthcoming about everything. When asked about the status of Ukraine’s 1.8 million internally displaced persons, he said, “The situation is more or less under control,” a remarkably tone-deaf response. Conditions are wretched for many IDPs, and those who live on the contact line lack access to water, gas, and food, and face daily shelling. While the Ukrainian government provides social assistance and pensions to IDPs, those payments were suspended earlier this year due to “inconsistencies in legislation,” leaving 350,000 IDPs without pensions and 15,000 without social payments.

Yatsenyuk has famously described his job as prime minister as a “kamikaze mission.” He had to pass a series of unpopular austerity measures in the midst of a plunging economy, and keep the country united while repelling the Russians. He knows his legacy is still uncertain. With a wry expression, he said, “I’m not the most popular politician in my country, but history is to judge us. So let’s wait and see.”