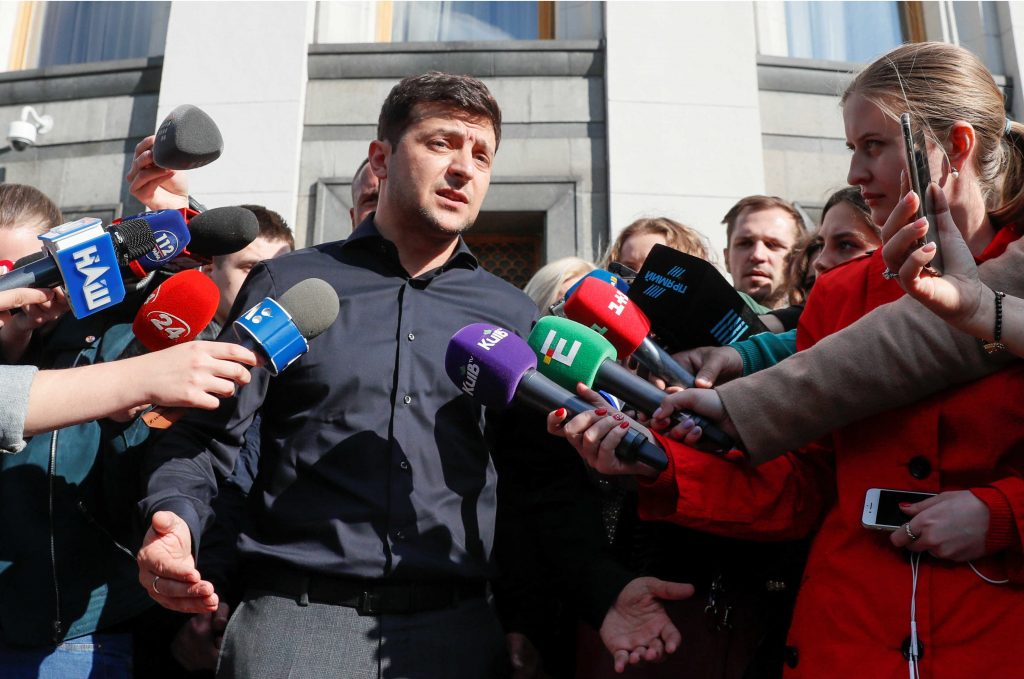 A key issue has emerged in the post-election drama in Ukraine. In a disturbing interview given by Andrij Bohdan, lawyer, confidant, and political advisor to President-elect Volodymyr Zelenskiy, he reveals that he continues to act as a lawyer for oligarch Ihor Kolomoiskiy with regard to the nationalization of PrivatBank. This assertion, if accepted by the president-elect, would constitute a major threat to the reform agenda of the Zelenskiy presidency.

The nationalization of PrivatBank in late 2016 was essential for the viability of the banking system of Ukraine. An audit of the financial position of the bank indicated that it was showing a massive deficit with respect to its capitalization. This was the result of billions of dollars of non-performing loans. Furthermore, a very large percentage of these nonperforming loans had been given to companies which were controlled by the shareholders of the bank, principally by Ihor Kolomoiskiy (49%) and Hennadiy Boholubov (49%). PrivatBank required massive re-capitalization, which was undertaken by the NBU, the Central Bank of Ukraine, under an agreement which forfeited the bank to the state. Subsequently, the state has pursued Kolomoiskiy and other shareholders for the recovery of the massive amount of capital which was effectively withdrawn from the bank.

The level of funds related to this bank failure are staggering. The audit revealed a $5.65 billion capital shortfall. Such a shortfall threatened the deposits of the over 20 million bank customers. As Ukraine’s largest commercial bank, its failure would have had massive repercussions to the banking system and negatively impacted the fragile economic recovery. The restructuring of the bank was considered of high importance by the IMF as it threatened Ukraine’s financial stability. The additional funds required for restructuring represented a significant percentage of the GDP of the country. A failure to recover any of the losses created by the former shareholders would represent a further blow to Ukraine’s total heavy debt load.

Most recently, Kolomoiskiy successfully obtained a lower court ruling that the nationalization of PrivatBank was illegal. This decision is being appealed to a higher court by both the Ministry of Finance and the NBU and has been the subject of a National Security Council meeting called by President Poroshenko. Given that the judgement was handed down by a judge who has been suspected of bribery in the past, its validity may well be questioned. With the known level of corruption in the judicial system, the potential verdict of the higher courts may also be tainted.

Under such circumstances, the position of President-elect Zelenskiy must be unequivocal. He must remove Kolomoiskiy’s lawyer, Bohdan, from any decision making in his entourage regarding PrivatBank. Any continuing role by Bohdan in this matter would compose a clear and obvious conflict of interest. It would undoubtedly be taken as a signal that oligarchic interests are being promoted through political influence. All promises of eliminating the control of oligarchs over the government would be shown to be vacuous. The central promise of the Zelenskiy campaign to fight corruption would be proven hypocritical. The loss of credibility with the population would be swift.

Zelenskiy’s advisors have said that PrivatBank will not be returned to Kolomoisky. This position must be unambiguously endorsed. Specifically, a pledge is needed to continue all available avenues to resist the efforts of Kolomoiskiy to reverse nationalization and to avoid the repayment of the assets which were absconded from the bank through non-arm length lending. This commitment should not be merely to passively respect “legal judgements” by the corrupt court system of Ukraine but must include special measures to resist any such retrenchment. The matter is of such crucial financial significance that effective measures must be found to protect the state’s budget and finances from harm.

If Zelenskiy does not stay the course, the consequences will be grim. There will be a dramatic fall in his approval rating which will result in a significantly lower level of support for the Sluha Narody party in the upcoming Rada elections. Failure to achieve a substantial block of support in the Rada will imply that the Zelenskiy reform agenda will not have enough support. The international financial institutions, most critically the IMF, will lose confidence and may well withhold further tranches of financing. With the high level of repayments coming due, there is a substantial risk of default and the hryvnia could collapse. Both the fragile stability achieved in the budget and in the banking system will be broken. The stakes are colossal and the hopeful new direction for the country could be dislodged.