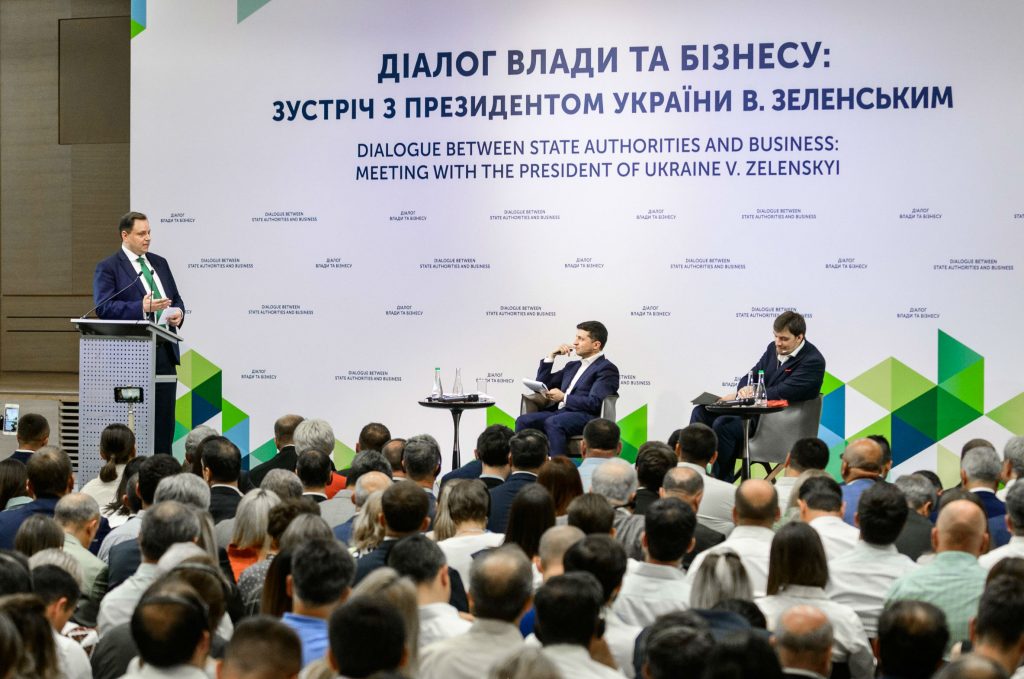 “I obviously mistook the dress code,” confessed Viacheslav Klymov standing tieless onstage where Ukraine’s president sat clad in his Sunday-best in Kyiv, Ukraine, on June 20. The newly-elected president replied to the head of the Union of Ukrainian Entrepreneurs not to fret and instantly removed his own tie in front of the audience of seven hundred business leaders. As the president next welcomed me on stage, I inquired whether I should also detach my neckwear. President Volodymyr Zelenskyy teasingly replied: “It’s OK. Your tie is green.”

Zeleny in Ukrainian means green. It was the color of the extremely successful election campaign that brought the new president to power one month ago with a whopping 73 percent of the vote.

During his first month in office, Zelenskyy is already showing that things will be done differently in Ukraine. At the meeting with international and local investors and businessmen, the president promised that under his leadership Ukrainian authorities will not stand in the way of business.

The president announced that he will cut red tape and immediately abolished 161 archaic business regulation directives. One such obsolete decree, for example, prohibited the manufacturing of school uniforms using foreign produced textiles.

He promised that the muscular Security Service of Ukraine (SBU) will focus on upholding state security, instead of shaking down businessmen and soliciting bribes, as it has been accused of doing in the past.

Zelenskyy pledged that Ukraine will move into the top ten on the World Bank’s Ease of Doing Business index in the next five years. The annual report ranks countries according to their regulations on businesses and protections of property rights. In 2019, Ukraine ranked 71st out of 190 countries.

The president vowed to continue working with the International Monetary Fund, reassuring investors that Ukraine defaulting on its international borrowing is not an option.

Zelenskyy added that the state will provide the infrastructure allowing businesses to flourish and will focus on investment in education and technology.

He stated that his team will eradicate corruption in the courts, starting with the launch of the Anticorruption Court and pushing through much needed judicial reform.

Many in Ukraine and around the world still do not know what to expect from Zelenskyy, since he ran an opaque campaign and is new to politics. But at the meeting with the business community, he came across as down-to-earth, affable, and sharp-witted. The former TV star comedian, unsurprisingly, is a good communicator, hitting the right messages that the audience wanted to hear.

He has a lot on his plate. Various estimates show that around forty percent of Ukraine’s economy is in the shadow, with endemic tax evasion. By implementing proper tax collection, it shouldn’t be too difficult to boost state coffers with billions of dollars of uncollected revenues.

During the three-hour meeting, Zelenskyy took questions and heard about the challenges businesses face. Many lamented the widespread smuggling of goods, blaming customs authorities of being sluggish and unable, or unwilling, to fight contraband and wage war on the smugglers that are depriving the government of much-needed revenues.

For years, the American Chamber of Commerce has been advocating to make Ukraine an outstanding place to do business. The essential basics required include a host of predictable factors, such as rule of law; macroeconomic economic growth; a fair, predictable, and transparent tax policy; secure investment rights, especially proper enforcement of intellectual property rights; land reform; infrastructure investment; and state-owned enterprise reform and privatization. Three other important to dos are reducing the outflow of talent migrating abroad; increasing spending on healthcare, and fully liberalizing the energy market. So far, Zelenskyy seems to embrace our agenda.

Halfway through the meeting, the head of the Presidential Administration passed a handwritten note to his boss onstage. A massive smile appeared on the president’s face when he read it. The note said that Ukraine’s constitutional court had just ruled that parliamentary elections can be held early, on July 21, as Zelenskyy and his team wanted.

Zelenskyy’s Servant of the People party is currently polling at about fifty percent. It is expected to form a significant part of the new parliament and government. The president and his team are likely to end up with a lot of power and, subsequently, a chance to implement much-needed reforms.

The majority of business leaders that I spoke with after the meeting were upbeat about what they had heard. However, there are no illusions that the job ahead will be simple. The hard part begins now, and Zelenskyy must deliver on the promises made.