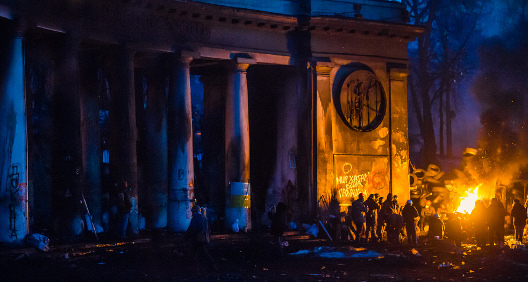 Barricade with the protesters at Hrushevskogo street on January 26, 2014 in Kiev, Ukraine. (Photo: Flickr/Sasha Maksymenko/CC License)

While the outcome of Ukraine’s upheaval may not be clear, this much is: Russia has successfully used sanctions, a pile of cash and natural gas discounts to set back Ukraine’s effort to build itself a European future. Even as Russia shifts focus to ensuring the safety and prestige of next month’s Sochi Olympics, the Euro-Atlantic community must prepare for the next time Moscow threatens to inflict crippling trade, financial, and energy sanctions on its ex-Soviet neighbors. That next time will be soon.

Like Ukraine, these two nations fall squarely into Russia’s perceived sphere of “privileged interests” – a region that Russia is trying to pull into its own Customs Union. Although the trade bloc currently includes only Belarus, Kazakhstan, and Russia, Moscow is planning for a more ambitious Eurasian Economic Union by 2015. At a summit of the Supreme Eurasian Economic Council in Moscow on December 24, Armenia, Kyrgyzstan, and Ukraine also sent delegations to discuss roadmaps for their possible accession, as well as harmonization of trade rules (although Ukraine was only an “observer”).

However, far from creating a bloc of innovation and modernization, this Russian-led group appears poised to become a redoubt of protectionism and autarky.

According to one recent study, Russia – in its first full year as a member of the World Trade Organization – was the most protectionist nation in the world in 2013 with 78 new trade restrictions. The three current members of the Customs Union accounted for approximately one-third of all global protectionist policies. Moreover, Russian capital flight for 2013 was estimated at $63 billion. Current Customs Union membership also ranks between 123 and 140 (of 177 nations) on Transparency International’s 2013 Perceptions of Corruption Index. These are not the features of a trade bloc that is serious about incentivizing innovation, attracting investment, and reversing dizzying emigration and demographic projections. (The latter suggest, for example, that Russia may lose 10 million of its working age population by 2025.)

It is therefore unsurprising that Russia would look to policies of coercion to draw its post-Soviet neighbors into the Customs Union, particularly young, modernizing democracies like Georgia and Moldova. Arguably, Moscow historically has visited more political and economic disruption upon these two than on nearly any post-Soviet nation. And a lack of attention in Brussels and Washington has always left Georgia and Moldova – each with fewer than five million inhabitants, not including the Russian troops occupying vast swathes of its territory – more exposed to Russian pressure.

While Georgia’s current government has sharply criticized – and pursued counter-productive vendettas against – its predecessor led by President Mikheil Saakashvili, Georgian policy of EU and NATO integration has remained largely consistent over the past decade. Years of Russian subversion, including a 2008 military invasion, an occupation of 20 percent of Georgian territory, embargoes on Georgian wine and water exports, visa bans, and energy cutoffs, have only emboldened Georgian public opinion in favor of a Euro-Atlantic future. By improving product quality, re-orienting export markets, and agreeing to host key infrastructure for the Southern Energy Corridor from the Caspian Sea to Europe, Georgia has also partially insulated itself against new Russian sanctions that are expected if Georgia moves forward with the EU agreements.

In 2009, Moldova – wedged between Ukraine and EU member Romania – experienced the first “Twitter” revolution, which dispatched the long-ruling communist party and swept into power a coalition of reform-minded, pro-European leaders. However, approximately 1,000 Russian troops – remnants of the Soviet 14th Army – continue to occupy Moldova’s breakaway territory of Transnistria, a haven for trafficking of proliferation-sensitive items, including recent seizures of uranium with potential weapons applications and anti-tank grenade launchers without serial numbers. Russia’s 1999 “Istanbul Commitments” to withdraw its weapons and ammunition from within Moldova’s internationally recognized borders by 2002 have gone unfulfilled.

Transnistria’s de facto leadership would like the territory to become another Russian exclave like Kaliningrad. Several years ago, Transnistria offered to host Russian Iskander missiles to counter US missile defenses in Europe and has moved towards the adoption of Russian law. And many Russian officials appear increasingly willing to exploit this source of pressure to undermine Moldova’s future in the EU

As Moldova was considering initialing the EU agreements in September, Russia dispatched Dmitri Rogozin, a deputy defense minister, to Chisinau. He warned that signature of the EU agreements would mean “cutting relations” with Russia, suffering the expulsion of Moldovan migrants from Russia, and losing Transnistria. Moldova also imports nearly all of its natural gas from Russia. On his trip, Mr. Rogozin reminded the nation that “[e]nergy supplies are important in the run-up to winter. I hope you won’t freeze.” Russia has also already re-issued a ban on Moldovan wine and other key exports.

With Russia’s aversion to courting further controversy before the Sochi Olympics in February, the Euro-Atlantic community has an important window to devise and implement a strategy to support the next round of democratic enlargement in Europe. When Georgia and Moldova (and potentially still, Ukraine) finalize their EU accords later this year, US and EU policymakers should be prepared to avert the economic havoc that Moscow may be willing to again discharge to undermine sovereign decision-making.

First, the US should politically re-engage the region – before the next crisis strikes – in support of a whole and free Europe. This re-engagement should include a restored US enthusiasm for NATO enlargement, which for decades has served as the vanguard of democratic transformation in Eastern Europe.

Second, the US and EU should lift energy restrictions and enhance trade benefits to the post-Soviet nations facing vulnerability to Russian pressure. By some estimates, Russia has wielded energy as a tool of political pressure nearly two dozen times over the past fifteen years. Lifting antiquated restrictions on US natural gas trade – as a bipartisan bill introduced by US Congressman Michael Turner (R-OH) envisions – would expedite energy exports to strategic regions such as Eastern Europe. The EU and US also should examine additional ways to promptly reduce tariffs for these nations; organize regular bilateral trade delegations; support the build-out of regional energy interconnections; and expedite visa-free travel with the European Union. Far from engaging in a bidding war with Moscow over Eastern Europe’s future, these measures will ensure long-term energy and trade diversification, thereby bolstering sovereign decision-making.

Third, the Obama administration should continue to use all existing legal authorities to sanction foreign officials who violate the internationally-recognized rights of their citizens. The January 22 announcement by the US Embassy to Ukraine that US visas had been revoked for several Ukrainian officials linked to violence against protesters is a step in the right direction.

Finally, the EU should clarify that its Eastern Partnership program to engage post-Soviet nations is the road to eventual EU membership – thus removing an ambiguity that Russia uses to spread discord. As Russia’s ambassador to the EU remarked after Ukraine’s decision to abandon EU negotiations, “The comfortable life of sitting in two chairs is coming to an end. …The EU has never promised Ukraine or any of the other ‘eastern partners’ full membership.” Although all nations aspiring to join Euro-Atlantic institutions must meet exacting requirements, membership should be viewed as the end game.

The Euro-Atlantic community’s policy of democratic enlargement should also continue to be one grounded in principles, not in competition with Russia. The Helsinki Final Act of 1975 – which Moscow itself has repeatedly re-affirmed – continues to serve as the foundational rules of the road for European security, providing that all European nations have a right to belong “to international organizations, to be or not to be a party to bilateral or multilateral treaties including the right to be or not to be a party to treaties of alliance” and must refrain from “military…political, economic or other coercion.” Russia’s enforcement of its perceived regional privileges is incompatible with these principles to which it has subscribed for nearly forty years.

In recent years, Russia’s leadership suggested that the EU’s program of engagement with the post-Soviet space was largely innocuous. Now, Moscow has apparently redrawn its red lines to strenuously oppose all forms of democratic encroachment. Western policy should adapt accordingly.

Marik String is a nonresident senior fellow at the Atlantic Council and served as senior professional staff member for European and Eurasian affairs and deputy chief counsel on the Senate Foreign Relations Committee.