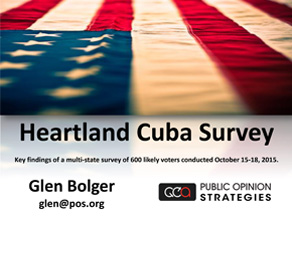 With presidential races heating up in key primary states, the Atlantic Council’s new US-Cuba poll of voters in America’s heartland finds majority support in both parties for further opening trade, travel, and investment with Cuba. Voters in Tennessee, Ohio, Indiana, and Iowa—though they largely consider the United States on the ‘wrong track’—strongly favor lifting trade and travel restrictions and endorse the reestablishment of diplomatic relations. Among the 70 percent of voters who do not approve of the country’s direction, 58 percent are in favor of President Obama’s new Cuba policies. The support in these states—important because of senior congressional delegations or weight in presidential politics—constitutes a major victory for the President’s executive actions over the last year.

View the new website dedicated to this poll to read the full results, watch a video on it, and learn more about launch events.

Highlights from the Atlantic Council’s heartland poll include:

Though sweeping changes to US-Cuba policy have been implemented by President Obama, the remaining restrictions on trade, investment, and travel lie mostly in the hands of Congress. A small group of elected officials have long lobbied in favor of keeping the embargo on Cuba, but support for lifting the sanctions has grown exponentially in the last twelve months with new bills targeted at lifting many of the remaining obstacles.