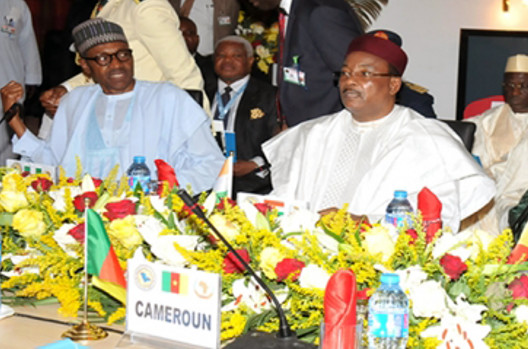 • But the terror group continues to launch deadly, near-daily attacks throughout the region—including on June 15 with twin suicide bombings in Chad—using guerrilla tactics rather than conventional warfare• Nigeria’s newly-inaugurated president, Muhammadu Buhari, has moved quickly to support regional counter-Boko Haram efforts, insisting on Nigerian leadership in the task force and pledging $100 million in financial support

• Despite the nascent successes of the joint task force, Islamic State gains in North Africa and, in particular, Libya, could impact the flow of weapons and fighters into Nigeria; Boko Haram pledged allegiance to the Islamic State in March of this year.

In response to the increasingly regional threat posed by the terror group Boko Haram, the government of Nigeria has increased its cooperation with neighbors Cameroon, Chad, and Niger. In January, the four countries revisited the Multinational Joint Task Force (MNJTF)—originally formed in 1998 to address security concerns in the Lake Chad area—to combat the group’s spread beyond Nigeria’s borders. In a separate but equally momentous bilateral agreement, Nigeria agreed to allow Chadian troops to enter Nigerian territory to fight Boko Haram.

Challenges to the partnership quickly emerged: Nigeria was initially reluctant to cede sovereignty to its fellow task force partners, an issue made worse by historic territorial disputes with Chad and Cameroon; its military faced record-low morale as soldiers refused to fight against Boko Haram due to lack of ammunition and basic supplies; and Nigerian leadership of the coalition was derailed by an election delay and a lame-duck president. In the early weeks of the intervention, President Idriss Déby of Chad complained that his forces were defeating Boko Haram and retaking towns in northern Nigeria, only to be delayed by the Nigerian military, which was supposed to deploy to protect the task force’s gains.

Despite its limitations, the MNJTF has thus far managed some successes against Boko Haram. In February and March, the armies of the MNJTF reclaimed 36 towns across three states. Forces from Chad and Niger were instrumental in expelling Boko Haram from the key towns of Malam Fatouri and Damasak, killing 300 fighters in the process. In March, the Nigerian government announced that only three local government areas were still being held by Boko Haram.

In the few weeks since his inauguration, President Buhari has worked hard to cement these gains. He recently moved Nigerian military headquarters from the country’s capital Abuja to the northeastern town of Maiduguri—which has been targeted time and again by Boko Haram—in effort to streamline decision-making and move it closer to the front lines. He has pledged $100 million in support to the MNJTF, $21 million of which has already been disbursed. On Monday, the US pledged an additional $5 million to the task force. At an anti-Boko Haram summit in Abuja this month, Buhari convinced MNJTF partners to accept a Nigerian commander, rather than rotating leadership, as previously suggested. Cooperation seems to be improving, and neighboring Benin has plans to join the coalition as well.

The turnaround has nevertheless been short-lived. In recent weeks, it has become clear the government’s territorial gains were overstated, and Boko Haram has decidedly retaken the initiative. The terror group’s ties to the so-called Islamic State appear to be paying off in strengthened tactical capacity: head-on battles over territory have given way to ambushes and phased, multi-pronged attacks. Possession of northern towns has continued to seesaw between pro-government and rebel forces. Boko Haram has responded to the announced relocation of army headquarters by launching multiple raids on the city, killing dozens of soldiers and civilians. And on June 15, two suicide bombings in Chad’s capital N’Djamena killed 34 people and injured more than 100. Assuming that Boko Haram is behind these latest attacks, it would mark the first time it has successfully struck the Chadian capital. Nations involved with the MNJTF should expect Boko Haram to continue to attack soft targets in their countries, particularly as the group is pushed out of its strongholds inside Nigeria.

Neither Chad nor Cameroon have the capacity to sustain an open-ended conflict with Boko Haram, and public opinion of the military engagement may sour if the countries find themselves victimized by escalating terror attacks.

A scenario of escalating regional terror attacks indeed seems most likely. Boko Haram allied officially with the Islamic State in March, declaring itself the Islamic State’s West African Province (ISWAP). As the Islamic State grows its presence in Libya (Libyan fighters associated with the Islamic State seized the coastal city of Sirte earlier this month), its partnership with Boko Haram could become more substantive. The most likely outcome would be an increased flow of weapons from North Africa through the region’s porous borders toward Nigeria. There is also potential for the exchange of foreign fighters (though to date there is very little evidence of foreigners from outside the region fighting with Boko Haram). Boko Haram is already demonstrating increased capacity to wage its war inside Nigeria—a continuing expansion of the fight to West Africa’s capitals is likely to be next.

Image: At a meeting of the Lake Chad Basin Commission in June, President Muhammadu Buhari of Nigeria sits with President Mahamadou Issoufou of Niger.