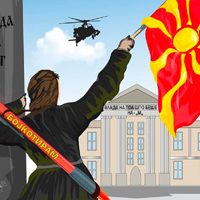 Ahead of Macedonia’s naming referendum on September 30, Nazi imagery and accusations have been inserted into the political dialogue online. Content spread by the mostly anonymous campaign to boycott the referendum falsely claimed the local politicians and foreign officials who support the referendum are also Nazi supporters or fascists.

Due to significant engagement, the influence of Nazi graphics on the voting public should not be underestimated in the referendum, which will determine whether Macedonians accept a proposal to change the country’s name to the “Republic of North Macedonia”, end a dispute with neighboring Greece, and open a path to further integration with the European Union and NATO.