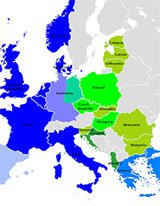 The worst move in an international crisis is to confuse others about your resolve.  That way wars start, witness the first and second world wars when Britain failed to make clear early enough that it would fight.

Might NATO be guilty of a similar lack of clarity today?   Not by measuring what it says. The appropriate words are being spoken and warnings given.  But words are not enough.

In the crisis over Crimea and Ukraine, NATO must recognise the change in the strategic environment since the alliance wrote its 2010 Strategic Concept that assessed the threat of a conventional attack against NATO territory as low.  We are back to the threat level of 1991, when we judged that crises on NATO’s borders could spill into NATO member states.  Russia today is no longer a country with which we should wish to develop a strategic partnership.

NATO must respond to the new reality and make President Putin understand that his actions in Crimea have changed our view of his country.

NATO has no security responsibility for Ukraine.  Nevertheless, its territorial security and independence is an important strategic factor that we are ready to support politically, economically and through military cooperation where needed.  Any move by Russian forces into Eastern Ukraine would therefore be highly destabilising and have unpredictable results – literally so, since we cannot predict precisely what we would do.  Everything would depend on the circumstances.  Logistical and intelligence support to Ukraine’s military could certainly not be ruled out in any resulting conflict.  Beyond that, who can say?

But we can and must be quite precise, indeed emphatic, about our response to any military move by Russia against a NATO member state.  Quite simply, that would immediately trigger Article 5 of the Washington Treaty and result in military conflict, which would not necessarily be confined to the area of the attack.  President Putin may know this in theory, but there is a risk today that he might not fully believe it. Any such doubt would be dangerous.

The most obvious source of confusion for Putin lies in the widely held belief that NATO countries will compromise and soften their responses to Russian aggression in order to protect their commercial and energy interests. We must act immediately to remove any scope for such misconception.

To make ourselves fully clear and credible, NATO should react strongly to Russia’s aggression in Crimea in the political, economic and military spheres:

Some will say that these steps will escalate the current crisis.  We say that, without them, we risk misleading Russia into thinking it may have a free hand in what it increasingly sees as its geographical sphere of influence, including territories that once were part of the Soviet Union or the Warsaw Pact and are now NATO members.

NATO enlargement following 1990 was based on the assumption, hope and belief that Russia would become a normal country.  Some even hoped, and still do, that Russia might itself join NATO one day.  But President Putin has turned back  the clock so that these ambitions can no longer be a basis for policy.  Regardless of any assurances to the contrary, we may be witnessing deliberate steps in a Russian strategic plan to foment and exploit unrest among Russian-speaking populations of neighboring countries, and then apply energy blackmail to encourage acceptance of the results.

We must set aside our hopes for normal relations and a strategic partnership with Russia for better days in the future.

The Washington Treaty, aimed at safeguarding the freedom, common heritage and civilization of our people, founded on the principles of democracy, individual liberty and the rule of law, has never been more relevant than today.  To defend it, we must be truly ready and determined to collectively defend ourselves.  We should do better to renounce NATO than continue it as a sham.

We wrote in 2010 of the need for greater strategic reassurance for NATO members that are particularly vulnerable to Russian interference affecting their sovereignty or independence.  We said then and repeat now that capabilities should be provided at appropriate readiness, judged against generic and specific threats, to respond collectively in the event of any attack, with specific steps including:

Such steps should be accelerated if not yet completed.

We remain opposed to spelling out in advance any specific conditions for invoking Article 5 beyond what is stated in the Treaty.  As we saw in Syria, so-called “red lines” can turn out to be not as they first appear,  and tempt adversaries to circumvent them, with counter-productive results.

Concerning the application of Article 5 to “new risks” (terrorism, proliferation, cyber attacks threats to energy supplies or other resources, threats to assets in space and uncontrolled movements of populations), we continue to believe that NATO should judge each situation as it arises, rather than deciding in advance how it  should react.  However, one additional category of risk must now be recognized on NATO’s planning horizon: the risk that external actors will foment internal unrest in support of territorial claims.  It is not a new phenomenon in Europe.

Article 5 of the Washington Treaty remains the essential basis for our freedom and peaceful economic development.  We must recognise, however, that many in our democratic societies have drawn the lesson from recent conflicts in Iraq and Afghanistan that military force is no longer an appropriate option whatever the circumstances, and we should therefore run down our military preparedness.  This is perhaps the most dangerous source of confusion so far as Russia is concerned.

NATO must remake the intellectual case for military preparedness and re-mark the ground so far as our own security is concerned.   Even if we were not prepared to intervene in Syria, and even if we did nothing to back up our guarantees of Ukraine’s territorial integrity, we will surely fight for each other.

Dr. Edgar Buckley is a former assistant secretary general of NATO and former senior vice president for the Thales Group. Dr. Ioan Mircea Pascu is a member of the European Parliament and former minister of defense of Romania. Both authors serve on the Atlantic Council Strategic Advisors Group.