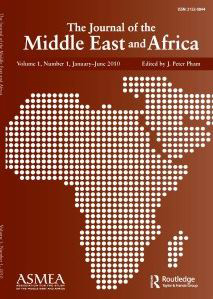 Atlantic Council Africa Center Director J. Peter Pham authored an essay entitled “The Development of the United States Africa Command and Its Role in America’s Africa Policy under George W. Bush and Barack Obama” for the forthcoming issue of the Journal of the Middle East and Africa.

Pham writes, “The announcement in early 2007 of the decision to create the United States Africa Command (AFRICOM) generated considerable controversy, not only in Africa, but also within the United States. Seven years into its existence, it is possible to tentatively reexamine the premises underlying the establishment of AFRICOM as well as its activities to date, measuring them against both the promise held out by the command’s proponents and the fears raised concerning it by critics. The conclusion is that, protestations to the contrary by certain U.S. officials notwithstanding, American interests were indeed the primary motivation for the command’s launch. Nonetheless, it has turned out that in pursuit of those strategic objectives—both during the remainder of the George W. Bush administration and, subsequently, in the first six years of Barack Obama’s presidency—AFRICOM’s activities have been largely an extension of ongoing U.S. security cooperation with the African states involved, and perhaps improved delivery of these efforts’ services, rather than the vanguard of some new militarized foreign policy. While a number of questions linger, AFRICOM seems to be progressively finding its niche within both U.S. policy and Africa’s own security architecture.”