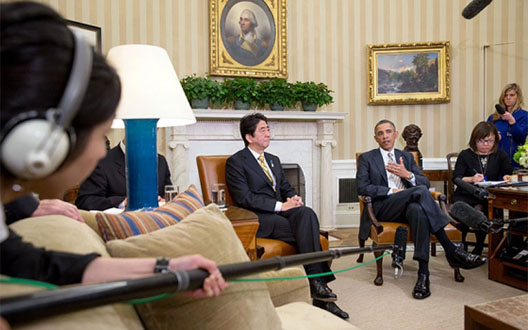 As U.S. President Barack Obama and Prime Minister Shinzo Abe gear up for a timely summit, a festering sense of uncertainty and unease stalks the U.S.-Japan alliance as it approaches a critical juncture.

After an exciting first year marked by renewed economic dynamism and impressive efforts to enhance Japan’s global strategic posture, Abe’s pragmatic streak appears to have been overshadowed by his conservative nationalism, marked by his Dec. 26 visit to Yasukuni Shrine to pay homage to Japan’s war dead.

The visit to Yasukuni occurred despite admonitions from the Obama administration, and some of his own top advisers, and was disconcerting to the White House. That, plus the subsequent political resurrection of the “comfort women” issue and revisionist comments by Abe-appointed board members of Japan Broadcasting Corp. (NHK) have troubled many, not least, the Obama administration.

Some wonder if Abe fully understands the degree to which dabbling in historical revisionism detracts from, if not undermines, his admirable strategic goals of renewing Japan’s economic and strategic dynamism as articulated in Japan’s National Security Strategy and embracing a collective security role. This has also raised fears that a provocative Japan could entrap the United States into armed conflict with China over the disputed Senkaku Islands.

Beyond Washington itself, the return of history has triggered predictable South Korean over-reactions, sending Japan-South Korea relations into a nasty downward spiral, even spilling over into the state government level, where a growing number of states from Virginia to New York are revising textbooks to add that the Sea of Japan is also known as the “East Sea,” as Korean-Americans have made their sentiments known. This has further strained South Korea-Japan ties and led to awkward situations, with Japan’s ambassador lobbying state legislators in Richmond and elsewhere.

To Abe’s credit, his recent statement in the Diet–that he has no intention of revising the (1993) Kono statement-–opened the door to the meeting with South Korean President Park Geun-hye and Obama at the Nuclear Security Summit. The discussion rightly focused on the common problem of North Korea. If successful and not just an isolated event, it should lead to an ongoing South Korea-Japan policy process focused on security cooperation on North Korea and other regional security challenges.

Meanwhile, a festering dispute with China over the Senkaku Islands (Diaoyu Islands in China) has heightened tensions and fears of accidental conflict.

At a time of growing apprehension in Northeast Asia, there is the specter of discord rising among U.S. allies and in Sino-Japanese tensions as Beijing exploits every history-denying comment to inflame palpable anti-Japanese nationalism in China and South Korea, and drive wedges between U.S. allies. In this environment, Abe’s sensible call for a Maritime Crisis Management mechanism to deal with the presence of Chinese coast guard ships in waters adjacent to the Senkakus has fallen on deaf ears.

At the same time, during a recent visit to Japan, we were struck by an unexpected phenomenon: widespread distrust of U.S. reliability among Japanese politicians, officials and academics.

They repeatedly pointed to Obama’s embarrassing inaction on Syria after pronouncing that “(President Bashar) Assad must go,” the drawing and then erasing of redlines on chemical weapons, and their own suspicions over the implications of the catchphrase “New Type of Major Power Relations” with China.

In addition, a perceived U.S. ambiguity with regard to “gray zone” situations (not war, not peace) and an increasing Chinese maritime assertiveness have combined to foster a sense of doubt: “Can we trust this guy in a crisis?” Some of our Japanese interlocutors spoke of a “perception gap.”

This mirror-image trust gap comes at a critical moment as the summit approaches. The U.S.-Japan alliance is at a critical juncture. Japan’s new Defense Planning Guidance and its first-ever National Security Strategy reveal a strategic convergence with the Pentagon’s just completed Quadrennial Defense Review.

The challenge ahead is to define respective roles and missions as Washington and Tokyo seek to revise the 1997 Joint Defense Guidelines that may redefine the alliance and govern the strategic relationship over the coming decade.

The upcoming Obama-Abe summit is an opportunity for political leadership in both nations to assuage doubts and provide the mutual assurances that can transcend current uncertainties and allow the alliance to realize its full potential.

Abe’s statement in the Diet on March 14 that he will uphold previous Japanese apologies is a step in this direction. For the United States and Japan to clarify their respective intentions and reinforce the alliance is critical to stability and security in Northeast Asia and the world.

Robert Manning, a former U.S. State Department Policy Planning staff member, is a senior fellow of the Brent Scowcroft Center for International Security at the Atlantic Council and its Strategic Foresight Initiative. James Przystup is a senior fellow at the Institute for National Strategic Studies at the National Defense University.