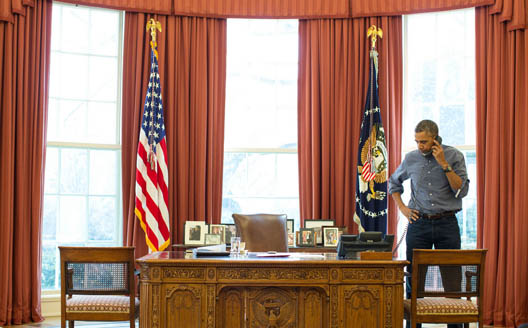 As Syria burns, Iran negotiations drag on and Ukraine melts down, the absence of decisive US action just about anywhere is causing great heartburn to the strategic mindset that brought you Iraq, Libya and other nation-building successes. US and EU helplessness in the face of Russian intervention in the Ukraine has turned that into an ulcer.

Two recent laments come to mind. The first comes from the AEI’s Michael Rubin who, in an Outlook piece in the Washington Post,  warns about the dangers of negotiating with bad guys. The other comes from ubiquitous Harvard know-it-all Niall Ferguson, who  ponders Obama’s failure to lead in the Wall Street Journal.

Both men seize on Obama’s inconsistency and inconstancy, implying—though neither comes out and says it—that muscularity by the Great White Father can solve the problem. Implicit also is the converse: restraint equals weakness. Both combine to offer an amazing case of historical amnesia, willful ignorance or nostalgia passing for strategy. A synopsis of this mindset is: when you have a hammer, every problem looks like a nail.

To be sure, Obama’s foreign policy offers a target-rich environment. Befuddled by the Arab Awakening, the current administration has taken successive positions on Egypt—all to little effect. And when the president of the United States says Assad “must go,” but has no idea how to achieve this (and later does nothing when Assad crosses the chemical-weapons red line)—well, it does not inspire confidence. And in regard to Ukraine, one might wonder what decisive steps did George W. Bush took when Moscow flexed its military muscle in similar way Georgia.

Beware of Bad Guys
Rubin warns about “dancing with the devil”—the title of his new book—and uses the demonizing term “rogue regimes” to describe a clutch of nefarious actors. He makes useful points about how countries like North Korea or Iran can use negotiations as a delaying tactic or to extract concessions. And he is not entirely wrong to see negotiations as a jobs issue for US diplomats, who sometimes may want to talk for the sake of talking: Think of all the greenhouse gas emissions which have been generated during successive UN climate talks with sparse results.

But underneath this lies a strange idea—that we are so exceptionally wonderful that  just talking to the United States is a high honor and privilege. The idea, so prevalent in the George W. Bush administration we served, is that diplomacy is not just a tool to achieve policy objectives but a reward that can legitimize bad guys. Almost never does this approach lead to problem solving.

There may be cases where an actor is so bad and incorrigible that the only useful step is to isolate them (think Mugabe in Zimbabwe or apartheid South Africa.). But it is almost never an either/or proposition: Iran and North Korea both show how sanctions and diplomacy can be employed simultaneously. With North Korea, Obama—to his credit—ended talks after Pyongyang’s provocative behavior (nuclear and missile tests, sinking a South Korean ship) made it clear that Pyongyang had no intention of yielding their nuclear weapons. And it would obviously make little sense to negotiate with, nihilistic, suicidal terrorists—although even the most venal and evil can be induced to talk, even as we fight and isolate them.

If you are concerned about nuclear proliferation or territorial disputes, what alternative exists beside negotiation? Unless you are a mind reader, diplomacy can be a useful means of testing intentions. As former Israeli prime minister said, “you don’t make peace with your friends, you make peace with your enemies.”

Global Retreat or Prudent Retrenchment?
Ferguson’s theme boils down to this: Obama is presiding over US global retreat. He claims Obama’s foreign policy mirrors in geopolitical terms the Federal Reserve’s “tapering” of expansive monetary policy, “a fundamental shift…in the national security strategy of the US.”

Citing Obama’s frequently empty “red line” threats is easy and not unfair. Yet Ferguson seems oblivious to the after effect of the winding down of two, decade-long wars (costing over $1 trillion and much blood, but with—at best—ambiguous outcomes). War-weariness is palpable, and the American public is now more alert than before to the folly of “nation-building.“ But retrenchment is not necessarily isolationism.

It is in regard to the Middle East that Ferguson enters the realm of the absurd. “Syria,” he argues, “has been one of the great fiascoes of post-World War II American foreign policy.” Really? Do the words Vietnam or Iraq mean anything to him? In fact he argues that, “the result of this U.S. inaction [in Syria] is a disaster.”

Whatever else it is, the cause Syria’s horrendous civil war is principally homegrown. Yes, it is exacerbated by Russian arms and Hezbollah and Iran’s Qods Force fighters on one side, and global jihadists on the other (And with Hezbollah and Al-Qaeda fighting each other, what’s not to like?). But it strains the imagination to blame it on the United States—as if US military intervention would be likely to do anything but make it worse. Again, it is as if the US experience in the Middle East over the past fifteen years has been deleted.

Of course, the administration hasn’t covered itself with glory on Syria. But its caution and restraint has been warranted, particularly by a fragmented opposition difficult to help. Not all problems have solutions and, as we in this country learned in the nineteenth century, civil wars sometimes must play themselves—albeit at dreadful cost.

In our contemporary conundrum, the very last response should be the argument that the Middle East must be treated as a colonial province where the US acts as imperial overlord. Is it really so easy to airbrush Iraq from recent history? The subtext for those indifferent to contrition over Iraq is unvarying: the Single Superpower must also be the sole global enforcer. This was the message in Senator Marco Rubio’s speech last week at the CPAC convention, echoed by a number of Republicans in Congress. We see the error in the logic that treats military intervention as a necessary response. Thus, the turmoil in the Middle East reflects not a playing out of history but a breakdown of US imperial order. This is the logic of the Great Retreat argument.

Reality is probably much more ambiguous. The world is still transforming as global power becomes diffused, as information technologies create individual empowerment such as that evident in Cairo’s Tahrir Square and, of late, in Kiev, Bangkok, and Caracas. At the same time, you may not be interested in geopolitics, but as Putin’s old-school tactics reveal with a vengeance, geopolitics is interested in you. There is a structural problem: Ukraine is on Russia’s border and is more of a vital interest (as opposed to important issue) for Moscow than for Washington.

The US remains the most dominant global actor, but more as primus inter pares than as sole superpower. It’s better to see us as chairman of the board of major powers than as lords of all we survey. With regard to specific crises, power and influence tend to be situational: leadership is often about assembling the right coalition of forces that can be brought be bear to address specific problems. How much of Obama’s foreign policy is a reflection of a more complex world of diffused power, one that is making addressing global problems increasingly more difficult, and how much of it is a result of administration shortcomings?

In this environment, the US needs clear strategic priorities rooted in knowledge about where our leverage lies, and where it doesn’t. Selective engagement based on priorities must accompany the global diffusion of power. It is not hugely satisfying, but such an approach reflects current global dynamics. Obama has made his share of mistakes, and displayed at times a dearth of leadership. But much of his foreign policy reflects a complex world of diffused power.

The choice lies not in remaining the sole superpower or indulging in retreat. On balance, and since our stupidly protracted land wars of the last decade, we have seen a modest, and rather prudent retrenchment however awkwardly executed. The frustrating ineffectiveness of Washington’s response to Moscow’s actions in the Ukraine is in one sense, a stark reminder of the limits of power. The maxim for the coming years should be this: You have to know when to hold’em and when to fold’em.

Robert A. Manning is a senior Fellow at the Atlantic Council’s Brent Scowcroft Center for International Security and formerly served on the State Dept. Policy Planning staff and National Intelligence Council (NIC) 2001-2012); James Clad is a former Deputy Assistant Secretary of Defense. Both served in the George W. Bush administration.