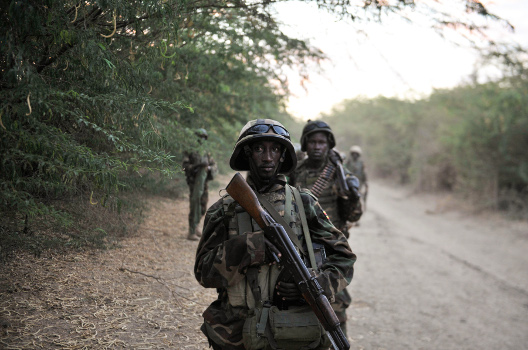 • Since 2011, Shabab has steadily lost territory, and on October 5 was pushed out of its last coastal stronghold, the port city of Barawe

• The loss of Barawe, and the successful airstrike on al-Shabab’s leader, Ahmed Godane, on September 1, has dampened the radicals’ morale and precipitated a rash of defections

• Even in its reduced and battered state, however, al-Shabab remains capable of destruction, and is pursuing a ‘mosquito-bite’ strategy of suicide bombings and assassinations in the heart of government-controlled areas of Mogadishu

• The Federal Government of Somalia remains its own worst enemy; President Hassan Sheikh Mohamud is embroiled in a bitter feud with his prime minister, Abdiweli Sheikh Ahmed, and progress toward the important tasks of finalizing the constitution and holding national elections in 2016 has decisively stalled

• The political momentum has been seized by the country’s competing clan factions, all of which are rushing to create autonomous regional governments in various—and overlapping—corners of Somalia

The Somali public widely blamed al-Shabab for the devastating famine of 2011, in which more than 200,000—most of them children—died. Al-Shabab has never recovered its credibility and today is unpopular among the Somali population. The African Union peacekeeping mission (known by its acronym, AMISOM) has capitalized on Shabab’s rapidly declining cachet with a series of successful military offensives.

But al-Shabab has stubbornly clung to life, reinventing itself as an insurgent group and reprising its early strategy of winning alliances by taking sides in local clan disputes. The loss of the port city of Barawe and the US airstrike on al-Shabab’s nominal leader Ahmed Abdi Godane are unlikely to inhibit these clan alliances or the guerrilla campaign. Kenyan forces operating under the African Union’s auspices are still enthusiastically colluding with al-Shabab in the charcoal smuggling trade out of Kismayo, ensuring that the radicals have plenty of revenue for launching attacks against the Somali government. And Godane’s death may actually clear the field for the clan-based leaders of al-Shabab—many of whom had been marginalized if not killed outright by Godane—to re-emerge from hiding and reassert their own factional agendas, some of which will be more palatable to Somalis.

Al-Shabab has been politically marginalized and is unlikely to regain its strength as a conventional military force. But AMISOM and the fledgling Somali security forces are painfully inadequate to the task of policing Somalia. Al-Shabab will easily be able to play spoiler, even as it hemorrhages fighters and territory. Its ‘mosquito-bite’ campaign of suicide bombings, IEDs, and assassinations will continue to embarrass the government, drawing attention to its many weaknesses.

The Somali government has yet to shake off its own chronic dysfunction. At President Mohamud’s urging, the parliament has tabled a vote of no confidence against the prime minister. Somalia’s murky constitution has made feuding between the two offices a permanent feature of Somali politics: six prime ministers have been sacked in the past six years. But this particular row is likely to cause more damage, coming at a time when Somalia’s international donors have visibly lost patience with the regime (the UN special representative, Nicholas Kay, has publically accused the Somali Parliament of selling its votes—and, by implication, President Mohamud stands accused of buying them), and as the government has utterly failed to make progress towards holding national elections in 2016. After years of missed benchmarks, the government’s time may now actually be running out: Uganda, which has made up the backbone of AMISOM since 2007, has begun to make noises about withdrawing in 2016. Without Uganda’s presence, the government’s security will be left largely in the hands of unreliable front-line countries—Ethiopia and Kenya—that have long preferred to back their own Somali proxies at the government’s expense.

The clans will continue to defend themselves from the expansion of central authority by constructing autonomous “regional governments” across Somalia. Some will form alliances with the Federal Government of Somalia, but others may pursue a pragmatic cooperation with al-Shabab, Kenya, or Ethiopia. The creation of these fiefdoms may not result in widespread insecurity—many Somalis seem to prefer and to take comfort in the decentralization of power. But it will frustrate Western state-building efforts, and will set the stage for an expansion of Ethiopian and Kenyan interventionism in Somalia.

Weather patterns are further jeopardizing the fragile country. Since October, heavy rains have caused flooding along both the Shabelle and Juba Rivers. Parts of Hiraan, Middle Shabelle, Gedo, and Lower Juba have been affected, and at least several thousand have been displaced from their homes. Over a million people are still food insecure and in a state of emergency. The United Nations has warned that weather conditions resulting in severe floods, combined with continuing insecurity, might push another two million people into hunger. The possibility of another famine is worryingly real: the UN warns that some 200,000 children are acutely malnourished or at risk of death by starvation.